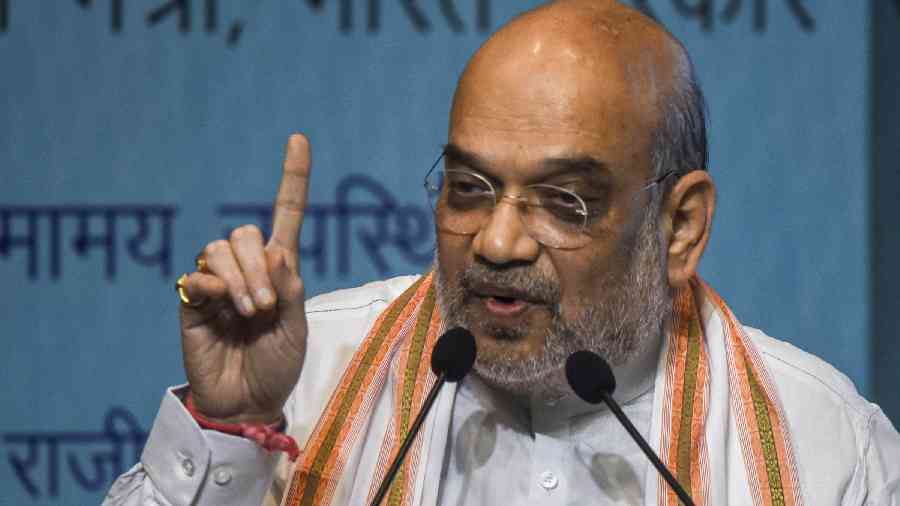 Union home minister Amit Shah on Friday said that pursuing education in a language other than one’s mother tongue prevented 95 per cent of Indians from achieving their true potential.

His comments, made at an event celebrating two years of the National Education Policy (NEP), come amid a government push for the use of Indian languages in higher education, especially engineering.

Shah too went on to talk about the teaching of “engineering, medicine and law” as well as research in the mother tongue, implying he mainly had higher education in mind.

“I want to say that when we do not teach in the mother tongue, 95 per cent of people cannot achieve their true potential. Only five per cent have the scope to utilise their talent through education in another language,” he said.

Shah did not say who these five per cent were. More than 20 per cent of the country’s schoolchildren study at English-medium schools, and should find it easier to pursue higher education in English.

“It helps enhance a person’s logical thinking, memory and skills for policymaking and implementation.”

The technical education regulator, the All India Council of Technical Education (AICTE), is currently developing textbooks for second-year BTech courses in 12 Indian languages. The project has been completed for first-year students.

The exercise highlights the challenges of technical education in Indian languages, for the books are being written in English and will be translated into the Indian languages through Artificial Intelligence. The translated text will be vetted by subject experts.

Apparently, it’s difficult to find enough subject experts capable of writing the textbooks in, or translating them into, their mother tongues.

Earlier this month, AICTE chairman Anil Sahasrabudhe had told The Telegraph that AI translates books with about 80 per cent accuracy, and that any deficiencies would be taken care of during reviews by senior professors.

“The technical terminology will be kept as they are (that is, will remain in English),” he had said.

Former AICTE chairman S.S. Mantha said the AI translations might fail to capture the nuances of the concepts and the language, or to read their context and complexity.

Mantha added that the reviews by subject experts would succeed only if they were proficient in both languages and their grammar.

“Errors in text or speech are extremely difficult to address. The finer aspects of applied sciences can be lost in translation. An expert may even bring in his or her own interpretation, thereby killing the spirit of the original book,” Mantha said.

Mantha also highlighted the challenges a faculty member trained in English would face while teaching in an Indian language. He expressed fear that the students would be poorly taught and struggle to find jobs.

“The larger question is, how would these students interact with fellow engineers trained in some other language?” he asked.

Sahasrabudhe, however, said: “What is important is learning. These students’ learning will be better in their mother tongue. They will be imparted training on communication skills. Getting jobs will not be difficult for them.”

The AICTE began allowing the teaching of BTech courses in the vernacular from last year, with over a dozen engineering institutes securing its approval to teach some of their students in Indian languages.

Shah claimed the NEP had received acceptance widely among the states, with only some like Tamil Nadu and Kerala opposing it on the ground that it would exclude the poor and marginalised.

Tamil Nadu’s DMK government has set up a committee to study the national policy and prepare a separate policy for the state. Kerala government representatives had red-flagged flaws in the NEP at a conference held in Tamil Nadu.

Both states are particularly unhappy with the four-year span recommended for undergraduate courses, saying that for the poor it means an extra year’s expenditure on education and a year’s delay in finding a job.

The NEP, among other things, promotes education in the mother tongue.