A carrom player, Musa in his teenage represented Jammu and Kashmir at various national championships 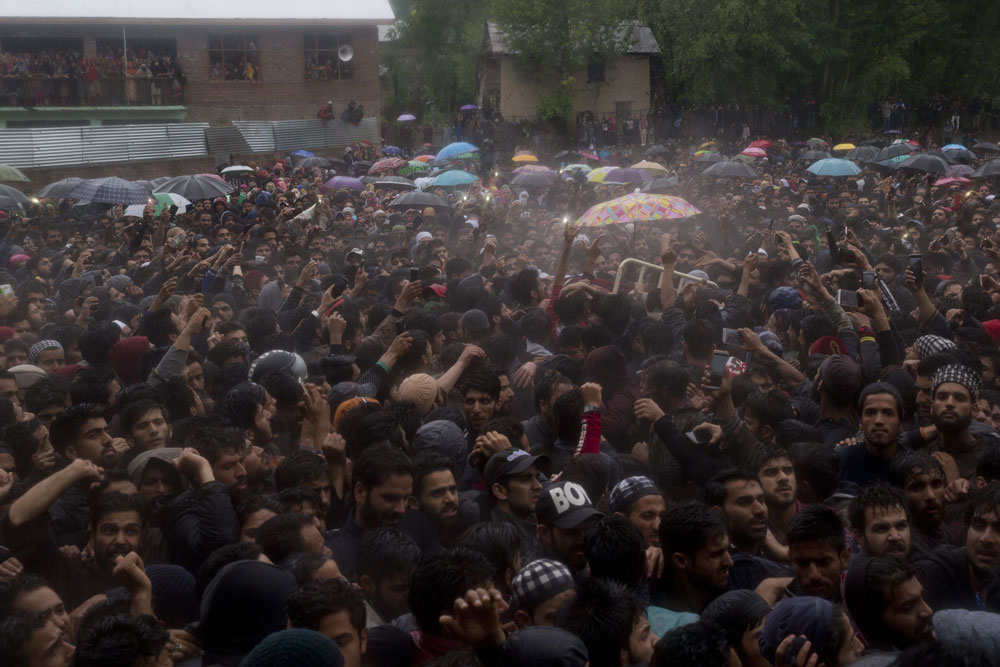 In a 'major success', security forces killed the chief of an Al-Qaeda affiliate in Kashmir, Zakir Rashid Bhat alias Zakir Musa, in an encounter at a village in south Kashmir's Tral on Friday, officials said.

Musa, who heads the Ansar Ghazwat-ul-Hind, came to the limelight in Kashmir Valley after he denounced Pakistan, cut ties with the banned Hizbul Mujahideen terror group and vowed allegiance to the Al-Qaeda.

A carrom player, Musa in his teenage represented Jammu and Kashmir at various national championships.

'He was one of the oldest militant and wanted for several terror-related crimes,' Pani told PTI.

A police spokesman said his killing was a major success as 'Musa had a long history of terror crime since 2013'.

Musa was trapped when police, along with CRPF and Army personnel, cordoned off Dadsara village in Tral in Pulwama district on Thursday evening.

Efforts to make him surrender failed and he started firing at the approaching security forces team.

In the ensuing encounter, Musa was killed in the early hours of Friday and his body was recovered at the crack of dawn, the officials said.

Musa was declared as proclaimed offender by a special court of the National Investigation Agency in Punjab's Mohali earlier this month in connection with serial blasts in Jalandhar in September last year, the spokesman said.

Several thousand people participated in the funeral prayers of Musa and seven rounds of 'Namaz-e-Janaza' were held to accommodate the huge rush of people who had gathered at his native village Noorpura in Awantipora of Pulwama district.

Active since April 2013, Musa was studying in his first year B.Tech when he picked up arms and joined hands with Burhan Wani, the poster boy of Hizbul Mujahideen killed in an encounter with security forces in 2016. In three years time, Musa had gained popularity among the locals in south Kashmir and was considered as a natural successor to Wani after his death.

However, he shocked the militant groups and separatist camps in the valley in 2016 when his video of threatening Hurriyat leaders surfaced if they continued to support Kashmir's accession to Pakistan.

Seen often brandishing guns along with Wani, the appearance of Musa changed completely from the beginning of 2017 and his videos and pictures showed him with flowing beard and holding on to a stick similar to slain Al-Qaeda chief Osama bin Laden.

The self-styled commander of the AGuH had in May 2017 threatened the Hurriyat Conference leaders for claiming that the movement in Kashmir was for establishing a secular state.

'I am warning all those hypocrite Hurriyat leaders. They must not interfere in our Islamic struggle. If they do, we will cut their heads and hang them in Lal Chowk,' he had said before parting ways with Hizbul Mujahideen.

Musa, according to the officials, was influenced by Yemeni preacher Anwar al-Awlaki, who was one of the main recruiter and motivator of Al-Qaeda terror group.

Protests broke out on Thursday night and Friday in Shopian, Pulwama, Awantipora and downtown Srinagar, with people raising slogans in favour of Musa, prompting authorities to impose curfew in some parts of the Valley as a precautionary measure.

The restrictions have been imposed in some areas of Pulwama, Srinagar, Anantnag and Budgam districts. Educational institutions have been closed for the day while mobile internet services have also been snapped across Kashmir.