3 killed as train rams into station in Jajpur 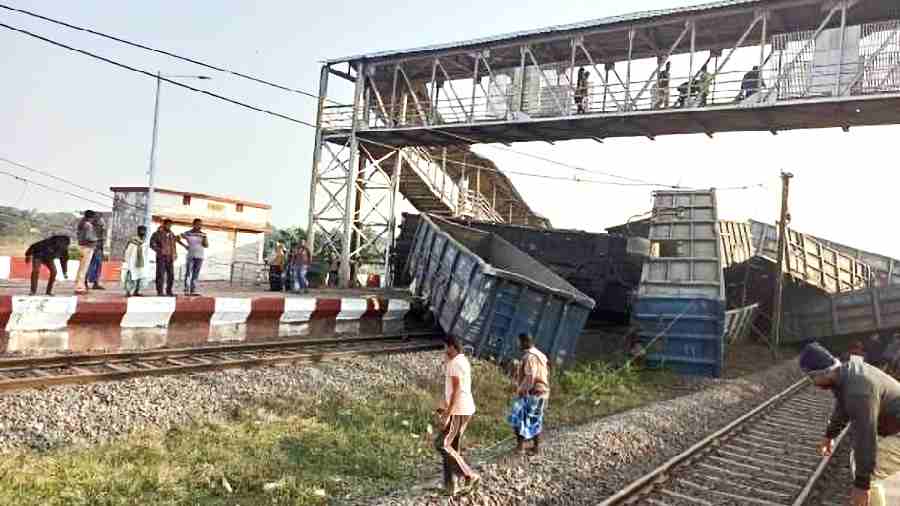 Three people were killed and several injured when a freight train jumped tracks and crashed into the waiting room at Korei station in Jajpur, around 109km from here, on Monday.

The victims were waiting to board the Balasore-Bhubaneswar MEMU Special train when the accident took place. The deceased have been identified as Parbati Bindhani, her daughter Kandhei Bindhani and Absum Bibi. Sources said the toll was likely to go up.

“Eight wagons of a goods train from Dongoaposhi in Jharkhand moving towards Chattrapur in Ganjam got derailed at 6.44am at Korei station in Bhadrak-Kapilash Road railway section under Khurda road division of East Coast Railways,” a media release issued by the ECoR said. The train had 54 wagons but all were empty.

The station building and the footbridge were damaged by the crash.

“My mother Parbati Bindhani and sister Kandhei died on the spot. Both were going to Cuttack for a medical checkup.  My sister had developed a tumour in her belly. The doctor suggested an MRI scan, which had to be done in Cuttack. Their train was scheduled to arrive at the station at 7am. Just 15 minutes before the train’s arrival, the freight train jumped the tracks and hit the platform. A portion of the station wall fell on my mother and sister. Kendhei’s two-and-a-half-month-old son was thrown far away. He has been admitted to a hospital,” Kandhei’s brother Kanhu Bindhani said.

“The train was moving at a high speed and lost control when the accident took place,” said a passenger.

Railway  officials have launched a probe. A few eyewitnesses said the side door of one of the wagons accidentally got open and hit the platform wall while the train was moving at a high speed.

“As the side iron door of the wagon crashed against the platform for nearly 100 metres, the train lost control as it was moving at high speed. The engine of the train and a few other wagons had crossed the station when the other wagons derailed and rammed into the station,” one of the eyewitnesses said.

“It’s too early to comment on the reasons leading to the accident,” railway officials said.

Korei is a passenger halt station and its platform stretches for only around 150 metres. It has a small waiting room beside the office of the railway authorities.

Chief minister Naveen Patnaik announced an ex gratia of Rs 2 lakh for the kin of the deceased and sent revenue minister Pramilla Mallick to the spot to expedite the rescue and relief operations.

The fire brigade team was also pressed into service.

Union railway minister Ashwini Vaishnaw announced an ex gratia of Rs 5 lakh each for the kin of the deceased.

The railway ministry also announced Rs 1 lakh assistance each for the treatment of the critically injured and Rs 25,000 for those who sustained minor injuries in the accident.

Eight trains were cancelled and 21 others diverted following the accident.