Mohammed Akhlaque, 52, was pulled out of his home on September 28, 2015, and killed on the suspicion of storing and eating beef 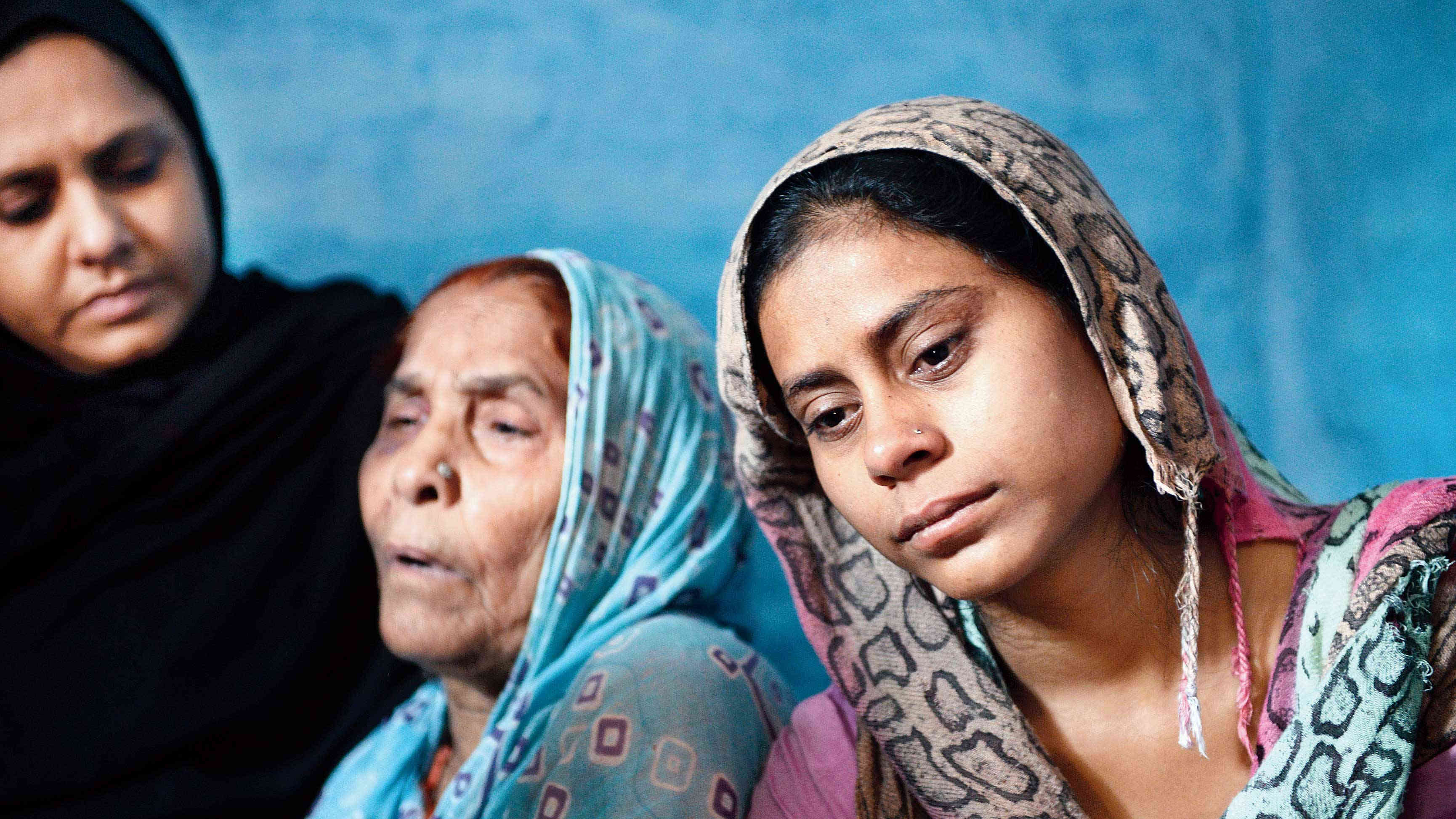 Akhlaque’s mother Asgari Begum (centre) and his daughter Shaista (right) at their Bisara home in Dadri in September 2015. Asgari Begum was also beaten up by the raiding mob when she tried to save her son.
Telegraph file picture
Imran Ahmed Siddiqui   |   New Delhi   |   Published 27.03.21, 02:02 AM

The Assembly polls are a reminder that it takes five years to change governments in a democracy.

It took longer than that just to begin the trial in a lynching case that ripped the “development” fig leaf of the Right-wing establishment in the country and presaged the real intentions of the Narendra Modi dispensation.

The trial in the murder of Mohammed Akhlaque started in a fast-track court in Greater Noida on Thursday — over 2,000 days or more than five years after he was dragged out of his home at Dadri in Uttar Pradesh and killed on the suspicion of storing and eating beef.

Yusuf Saifi, counsel for Akhlaque’s family, told The Telegraph: “The charges against the 14 accused persons were framed last month and the trial started yesterday (Thursday). The court has fixed the next date of hearing on April 12. Akhlaque’s family members are witnesses in the case and they will testify in court as and when it summons them.”

Akhlaque, 52, was pulled out of his home in Dadri, less than 50km from Delhi, on September 28, 2015, by a mob and killed. His younger son, Danish, was also thrashed on the suspicion of eating and storing beef. The murder was the trigger for the intolerance debate that saw leading writers, scientists, artistes and filmmakers stand up in protest.

According to the chargesheet filed by police, Vishal Rana, the son of local BJP member Sanjay Rana, is the prime accused and a key conspirator.

Asked why it took over five years for the trial to begin, lawyer Saifi said one of the reasons was a move by defence lawyers to put up several discharge applications before the designated court as well as other applications demanding a CBI inquiry.

“Judges hearing the case were changed twice. Two judges were transferred during the hearing of the case and the case files had to be placed before the third judge,” Saifi said.

A preliminary analysis of the meat sample conducted by a veterinary laboratory in Dadri had revealed that the meat found from the house was of goat and not beef. Later in June 2016, the Uttar Pradesh University of Veterinary Science and Animal Husbandry, Mathura, had declared the meat sample as that of “cow or its progeny”. The meat sample, however, had not been found inside Akhlaque’s house but from the site where he was lynched.

Saifi said there was still no clarity on the final report on the meat sample. After the test in Mathura, the sample was sent to the Forensic Science Laboratory in Lucknow for a final opinion.

“The prosecution has so far not revealed anything on that,” he said.

All the 17 accused are out on bail. One of the accused, Ravi Sisodia, died of suspected chikungunya in jail. Two of the accused were minors at the time of Akhlaque’s killing and they will be tried by the Juvenile Justice Board, Saifi said.

Vishal, the suspected key conspirator, is accused of making an announcement on a loudspeaker from the village temple that Akhlaque had stored beef inside his house. The mob had stormed the house, found pieces of meat in the fridge and claimed it was beef. The attackers had dragged Akhlaque and Danish out of the one-storey house and beaten them with sticks, bricks and hockey sticks. Akhlaque died on the spot while Danish suffered multiple injuries.

Danish, Ikraman and Shaista are the “key eye-witnesses” in the case.

“The confession statement of Vishal is part of the chargesheet. In his statement, he has confessed that he and the other accused had been instigated by villagers through the claim that Akhlaque had slaughtered a cow, and they had become emotional,” Saifi said.

In October 2016 in the village where Akhlaque was lynched, people had draped the Tricolour around the coffin of the accused Ravi, triggering a controversy. Ravi’s coffin was placed near the spot where Akhlaque was murdered and hundreds of villagers had gathered to place wreaths on it before draping it in the national flag.

Akhlaque’s family is also dealing with the cow-slaughter case that was registered against them in 2016 by locals. Allahabad High Court had later stayed the arrest of the family members. The police have so far not filed a chargesheet.

Mohammed Jan, Akhlaque’s younger brother, had said some of the accused persons and their parents had been putting pressure on them to withdraw the lynching case in exchange for the withdrawal of the cow-slaughter case.

Cow slaughter was banned in Uttar Pradesh in 2002 when Rajnath Singh was chief minister. But there is no ban on possession and consumption of cow meat if the animal is not slaughtered within the state. Even if a cow is slaughtered, the maximum punishment is seven years in jail.