The virus has rapidly spread across the world in the past week, causing stock markets to sink to their lowest levels 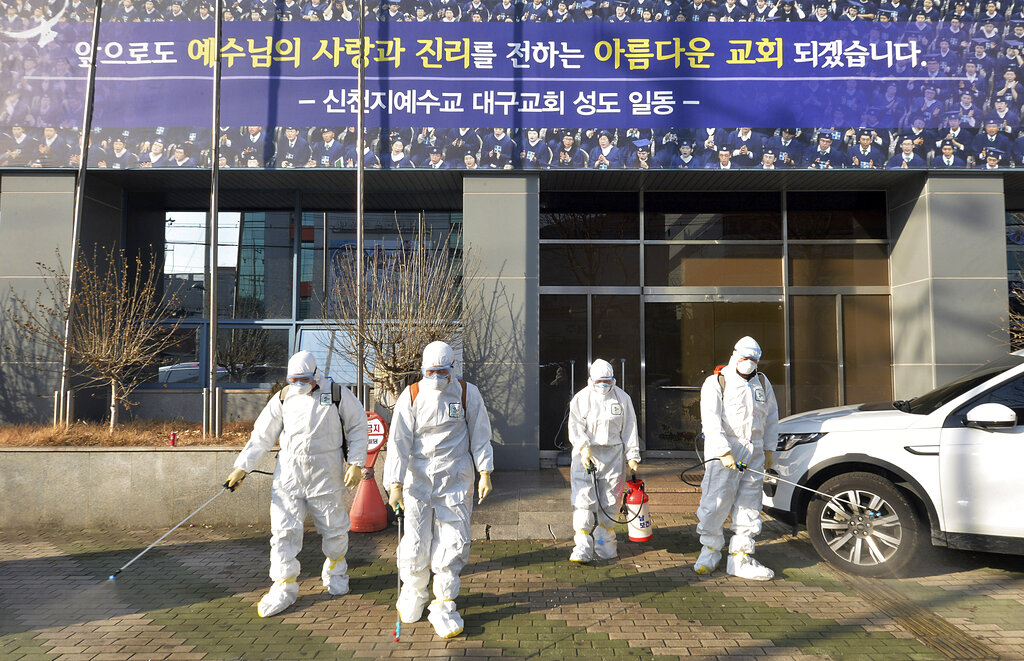 South Korea reported its biggest surge in new coronavirus cases on Saturday as concerns grew of a possible epidemic in the United States and the World Health Organization raised its risk alert to its highest level.

The virus has rapidly spread across the world in the past week, causing stock markets to sink to their lowest levels since the 2008 global financial crisis over fears that the disease could wreak havoc on the world economy.

More than 2,900 people have died and over 85,000 have been infected worldwide since it was first detected in the central Chinese city of Wuhan late last year.

The vast majority of infections have been in China but more daily cases are now logged outside the country, with South Korea, Italy and Iran emerging as major hotspots.

South Korea has the most cases outside China, with 3,150 infections as 813 more patients were reported on Saturday -- the country's biggest increase to date.

North Korean leader Kim Jong Un warned top party officials of the “serious consequences” of failing to prevent an outbreak on their side of the border.

The impoverished nation, with a weak and ill-equipped healthcare system, has closed its borders to prevent the spread of the disease into its territory.

The virus has also spread to new zones in recent days, reaching nine new countries including Azerbaijan, Mexico and New Zealand, as well as reaching sub-Saharan Africa with Nigeria reporting its first case.

”We have now increased our assessment of the risk of spread and the risk of impact of COVID-19 to very high at global level,” WHO chief Tedros Adhanom Ghebreyesus told reporters on Friday.

European nations are scrambling to contain the outbreak as new infections mounted in several countries -- many linked to virus hotspot northern Italy -- including in France where a surge of new cases was confirmed Friday.

President Emmanuel Macron on Saturday chaired a ministers' meeting on curbing the outbreak, after officials warned the epidemic had reached a “new stage”.

”The virus is circulating in our territory and we must curb its spread,” French Health Minister Olivier Veran said Friday.

Meanwhile in the US, health officials reported three more cases of the new coronavirus transmitted to people who did not travel overseas or come in contact with anyone known to be ill, indicating the disease was spreading in the country.

There are now four such cases in the United States, all on the Pacific seaboard, in addition to some 60 other infections in the country.

”The virus is here, present at some level, but we still don't know to what degree,” said Sara Cody, director of public health for California's Santa Clara County, the heart of Silicon Valley where tech giants like Apple and Google are based.

US Federal Reserve chair Jerome Powell said the central bank stood at the ready to intervene if needed, given the “evolving” risks to the world's largest economy posed by the outbreak.

Official data released in China on Saturday showed the extent of the damage caused to the world's second-largest economy, with manufacturing activity falling to its lowest level on record as key industries ground to a standstill under drastic containment measures.

More global events were disrupted due to the epidemic, with the United States delaying a regional summit of the Association of Southeast Asian Nations due in Las Vegas next month.

”This is not a time for panic. It is time to be prepared -- fully prepared,” UN Secretary-General Antonio Guterres said.

South Korea's epidemic is centred in its fourth-largest city, Daegu, whose streets have been largely deserted for days, apart from long queues at the few shops with masks for sale.

Three women in the Daegu area died of the illness, taking the national toll to 17, authorities said Saturday.

South Korea's total is expected to rise further with screening of more than 210,000 members of the Shincheonji Church of Jesus, a secretive entity often accused of being a cult that is linked to around half of the country's cases.

On Saturday, South Korea also reported its first reinfection case with a 73-year-old woman testing positive for a second time after recovering from the virus.

South Korean officials say they are not considering a citywide quarantine for Daegu similar to the lockdown imposed on Wuhan.

In Iran, unnamed health sources told the BBC that at least 210 people had died of the coronavirus -- far beyond the official death toll, but Tehran angrily denied that figure.

The death toll in Iran jumped to 43 on Saturday.