A class starts and ends with meditation, which at the very least narrows the student’s attention to the present 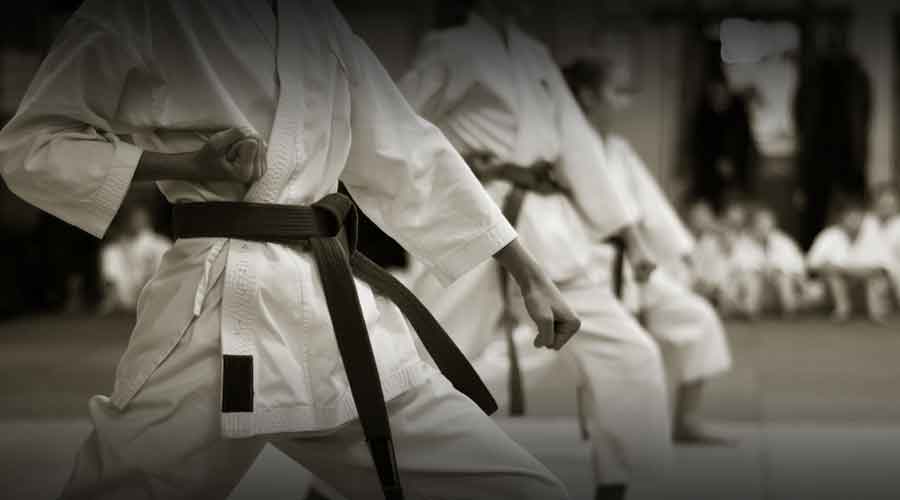 Breathe in and out, throw punches and kicks, pose in awkward stances, learn some fight moves and the class is over!
Shutterstock
Mayukh Banerjee   |   Published 29.10.20, 03:44 AM

A karate class, to the uninitiated, may seem to be all about listening to commands and imitating movements that are, to say the least, unusual. Breathe in and out, throw punches and kicks, pose in awkward stances,  learn some fight moves and the class is over! So let’s try to simplify things a bit.

A karate class starts and ends with meditation. At the very least, meditation narrows the student’s attention to the present. When a strict Sensai asks you to focus, there aren’t too many other options! An oath called the “Dojokun” is sometimes recited to remind students of the goal of karate: to achieve strength of mind, body and spirit.

Karate stretching consists of a flowing pattern of exercises for the joints, muscles, tendons and ligaments. These promote oxygenated blood circulation throughout the body and prepares it for the more intense activities to follow. Some exercises, like the full split, are impossible for the first-timer to perform, but, in the non-judgemental friendly atmosphere of the dojo, it is well understood that perfection takes time. The long term benefit of these exercises is better mobility, stability and balance.

Kihon consists of the fundamental kicks, punches, blocks and stances. These are practised in repetitions with emphasis on correct form, speed and power. I rate a punch 0% if only the hand is used, 50% if the hips are mobilised and 100% if the power is generated from the ground up in one kinetic chain. Kihon develops muscle memory, hand eye coordination, strength, cardiovascular endurance and lean body mass. Practising kicks and punches is a great fat burner!

I view Kata as the “art” in martial arts! It is a series of forms performed in a flowing pattern. Some advanced Katas have 60+ steps, including crouching stances and mid-air spins. They are as beautiful to watch as they are taxing to perform.

Finally Kumite or sparring teaches a student to face adversity. The goal is not to win or lose, but to face the challenge. I call it adrenal stress response training, or being deliberately put into a stressful situation and being taught to deal with it in a calm and collected manner. No fight was ever won in a heightened state of emotion, be it anger or fear.

Due to mushrooming karate schools in Calcutta, each with its own version, karate has lost its importance to many. Introducing karate as a part of school curriculum, although a noble idea, has also diluted its impact. A 45-minute session, once a week with a student teacher ratio of 1:50 (average), is just not enough. But, if taught well, karate is an invaluable skill. For some, it is a way of life!

Always consult a professional before starting on an  exercise programme.