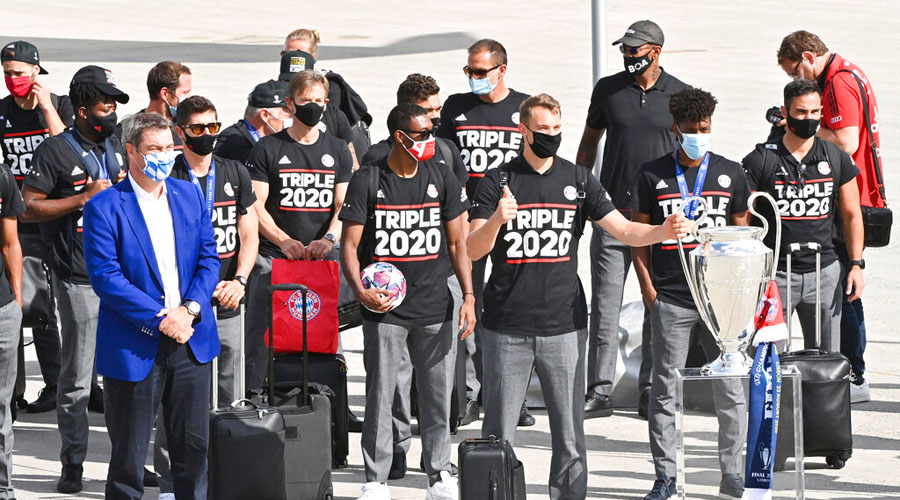 Beating a drum, his Bayern Munich jersey replaced by a “Champions of Europe” T-shirt, Joshua Kimmich wanted to savour the scene of glory.

Ninety minutes after setting up the goal that won Bayern’s sixth European Cup, Kimmich returned to the confetti-covered pitch where Paris Saint-Germain had been beaten 1-0 on Sunday night. Soon he was joined, sitting in the centre circle, by Bayern teammates David Alaba and Serge Gnabry. Before long the lights went out on the Stadium of Light.

In the darkness of the Lisbon stadium, the players remained in celebration and contemplation.

On a continent where more than 200,000 have died from the coronavirus, the longest and most disrupted of peacetime men’s European football seasons ended in emptiness and near silence.

“When you win a title like this with brothers on the pitch,” Kimmich said, “that’s the maximum you can ask for.”

Just a few hundred people were allowed into the Benfica stadium to see PSG academy graduate Kingsley Coman head in the winner from Kimmich’s cross in the 59th minute. While Bayern won its first final since 2013, PSG has yet to lift the European Cup despite more than $1 billion being spent on players in nine years.

More than $500 million was spent on Neymar, Kylian Mbappé and Angel Di Maria but PSG looked far from formidable or threatening against the Bavarian giants who felt more assured on European club football’s biggest stage. As the costly front three were frustrated in front of goal, it was instead a winger who was born in Paris and started his career at PSG who inflicted the blow. Coman scored Bayern’s 43rd goal of a perfect European campaign that has seen Bayern become the first team to win all 11 Champions League matches.

“I feel a lot of happiness, but also sadness for PSG,” said Coman, who left his boyhood club in 2014 — first for Juventus — after feeling undervalued. “It hurts my heart a bit.”

The win capped an incredible transformation this season under Hansi Flick, who emerged from the shadows in November, with a promotion to the top coaching job with Bayern fourth in the Bundesliga. The European Cup joins the Bundesliga trophy — won for an eighth successive season — and the German Cup.

“We all know where we’ve come from this season,” Bayern forward Thomas Müller said. “There are no secrets, we just kept moving forward. Obviously we have a lot of quality in the team, but we also have the spirit. The boys are prepared to suffer. ”

The season is now over — three months later than planned due to the pandemic pause in play — with Bayern treble winners just as it was in 2013.

“We weren’t clinical enough,” PSG coach Thomas Tuchel said. “We want Kylian and Ney to always score, but you can’t ask for that.”

It was the first final to end 1-0 since Real Madrid beat Juventus in 1998 which was also the last final to feature teams who qualified as domestic champions.

Not that PSG lacked chances to take the lead at a final that should have been played in Istanbul in May, rather than the Portuguese capital in late August when seasons usually begin, not end. Only the presence of “Istanbul” on the match ball that Neymar struck at Bayern’s goalkeeper-captain Manuel Neuer in the 18th was a reminder here of the pandemic-enforced change of location.

Perhaps the only surprise was that there was no 56th goal of the season by Bayern forward Robert Lewandowski. For once his scoring contribution was not needed as this season like no other ended with a 21st successive win for Bayern as part of a 30-game unbeaten run.

“So many people deserve credit for this victory,” Flick said. “You saw during winter how much determination we have in this team, which is obviously something you wish for as a coach.”