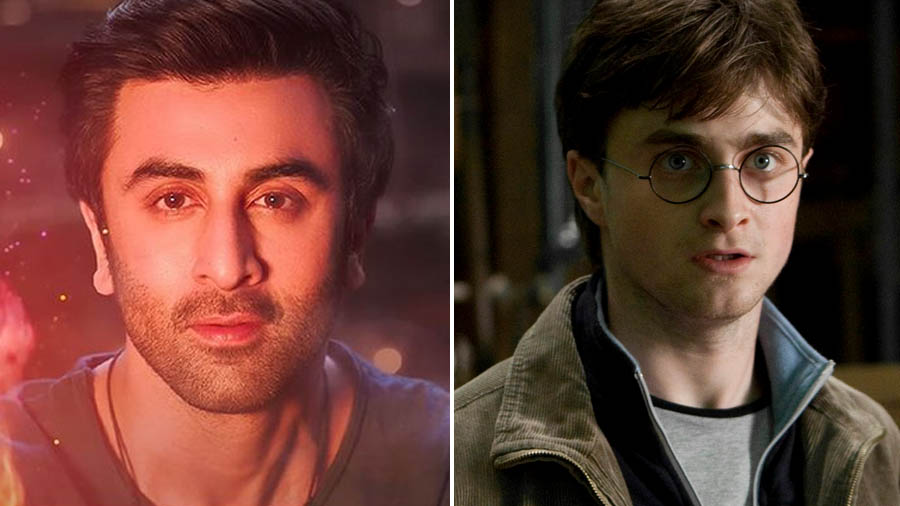 “You are protected, in short, by your ability to love!”

Albus Dumbledore had famously said these lines in Harry Potter and the Half Blood Prince. The power of love was described by the wizard as the strongest magic of all, which even the Dark Lord Voldemort didn’t understand, and despised. But it was Lily’s love for her son, Harry, that shielded him from the death curse. In short, the Potterverse rests on one simple talisman — love triumphs all hate in the world. This seems to be the crux of Ayan Mukerji’s latest visual fantasy Brahmastra - Part 1: Shiva.

Brahmastra, running successfully at theatres, tells us the story of ancient Indian Astras (weapons) and the wise sages who controlled them. Each of these Astras harnesses the power of some element of nature — fire, water, wind, or even animals like the monkey or the bull.

The Astraverse that Mukerji has created is built around the age-old paradigm of love. Shiva (Ranbir Kapoor) discovers his ability to control fire at a Durga Puja pandal, after he meets Isha (Alia Bhatt) for the first time. It is Isha’s presence that ‘switches on’ this strange power in him. As the hunt for Brahmastra progresses, their love blossoms and becomes a pillar on which rests the fate of the whole Astraverse.

As I sat in the theatres, packed among hundreds of other fans, hooting and cheering for Shiva in his battle against evil, a sense of deja vu gripped me. Do not get me wrong, Brahmastra is not an Indian version of Potterverse, far from it. But the similarities are striking. Mukerji has heavily drawn inspiration from J.K. Rowling’s classic fantasy series in spinning his own world of Indian mysticism. And at the centre of it all is the message: love is the strongest magic of all.

Story of an orphan

Brahmastra is a story of an orphan, just like the Harry Potter series. Shiva lost his mother to a fire tragedy when he was a toddler. He occasionally gets flashes of that fateful night in his nightmares. Rings a bell?

Harry Potter’s parents were killed by Voldemort, and the Dark Lord was vanquished as he tried to kill baby Harry. He was raised by his aunt Petunia and uncle Vernon. He was told his parents died in a car accident, and often saw a green light in his nightmares — a grim reminder of how his parents died.

In the wizarding world, the innate magical powers start showing when kids turn 11. In Harry Potter and the Philosopher’s Stone, we witness how he speaks to the Boa Constrictor at the zoo. He had even performed some tricks subconsciously when he was bullied at school. It was this ‘abnormality’ that Uncle Vernon despised. The word ‘magic’ was forbidden in the Dursley house. This is the reason why Uncle Vernon tried to hide the letters from Hogwarts that Harry had received. All in vain, though. Finally on his birthday, Hagrid reveals to Harry that he is a wizard.

In Brahmastra, Shiva nearly meets with an accident during a Dussehra event. As the effigy of Ravan explodes after being lit on fire, it has a mystic effect on Shiva, who faints instantly, remaining unscathed, though, from the flames. As Shiva admits, he has a weird connection with fire. Like Harry, he believes this is an abnormality, which he hides even from Isha. It is only when he meets Guru (Amitabh Bachchan) that Shiva finds out that he is actually Agni-Astra.

Hogwarts Ashram and our very own Dumbledore

Fans of the Harry Potter universe swear by Hogwarts. It is home to people who are different. It is where one can truly be themselves. Hogwarts is comfort. It is also the school of wizardry. And Albus Dumbledore is the principal who guards the castle like a family patriarch. The school is located somewhere in Scotland, among the mountains, hidden from plain view. In Ayan Mukerji’s Astraverse, we have the Ashram, somewhere in the Himalayas. It is also guarded from public view through spells and magic. The guardian of this secret hideout is Guru – the head of Brahmansh, the clan of sages protecting the world.

Secrets of the past: Harry was a Horcrux, Shiva is Agni-Astra

Harry, as we all know, was destined to vanquish Lord Voldemort. As the prophecy said, either must die at the hand of the other for neither can live while the other survives (Harry Potter and the Order of Phoenix). In the last book of the series, Harry Potter and the Deathly Hallows, it was revealed that Harry was a horcrux — Voldemort had transferred a part of his soul, unknowingly, when he cast the Death Curse on him. Hence the lightning-shaped scar, and Harry’s ability to wander into Voldemort’s mind.

In Brahmastra, Shiva initially believes he is an orphan. However, Guru later reveals to him that he is the son of Amrita and Dev — both of whom were part of Brahmansh. Dev was ambitious, and wanted to yield control over Brahmastra, in order to become Brahma Dev, the mightiest of them all (much like Voldemort’s wish to become immortal).

But that’s besides the point. Dev is the OG Agni-Astra, and parts of his powers were transferred to Shiva when he was conceived. Because of this connection, Shiva becomes the new Agni-Astra. He also gets flashes of the secret shrine where members of Dev’s cult are trying to resurrect him.

From darkness to light

Throughout his journey of self-discovery, Shiva is torn by a dilemma. He is coming to terms with his power to control fire. But deep down, he feels responsible for his mother’s death, assuming that he had inadvertently caused the fire that took Amrita’s life. He is fearful of the devastation that fire causes.

It is Isha, who makes him appreciate the fire as a source of light. Just like Albus Dumbledore had told us in Harry Potter and the Prisoner of Azkaban, “happiness can be found even in the darkest of times, if one only remembers to turn on the light”.

Mukerji has saved the story of Amrita and Dev for the second part of his trilogy. It is easy to guess that Shiva is wrong about his mother’s final fate. That Amrita died in a fire tragedy has been established in this part of the series. But what caused the fire, still remains a mystery.

I have no qualms in sticking my neck out to say that I believe, like Lily, Amrita, too, sacrificed her life so that Shiva could live. Love casts a protection so strong that the strongest of wizards fail before it. Voldemort had never known love. Lily’s sacrifice had reduced him to rubble.

In Brahmastra, Shiva’s willingness to sacrifice himself for Isha accords similar powers to him, allowing him to channelise even the destructive forces of the mightiest weapon ever known to mankind. Love wins. Always!