The duo danced on the terrace of a house for a party sequence for the film Switzerland, directed by Sauvik Kundu 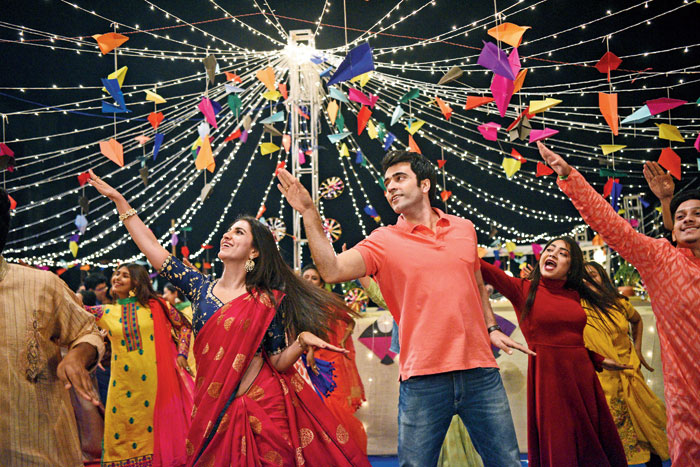 Abir Chatterjee and Rukmini Maitra (playing Shibu and Rumi, a married couple) had a blast dancing on the terrace of a house for a party sequence for the film Switzerland, directed by Sauvik Kundu, on Monday. The Telegraph chats with the duo…

What’s your take on dancing in films? We had seen you dancing in Prem By Chance…

Then there was Katmundu. And there was one more film, which I cannot recall right now. I have done choreographed sequences… this song sequence is also very slice-of-life. We are inhibition-free at a party… so we wanted that vibe in the steps here. Throughout the film we have created some touching moments. In the song also, I wanted to deliver that only. Today, I told Rukmini and the AD team that I am not my natural self (smiles). I told them, ‘You may feel that I am getting irritated.’ But that’s not the real me. This is because I am a bit tense! Before the song shoot, I was trying not to think about this. That’s the only preparation I had (smiles).

Tell us about your character Shibu?

He is a middle-class guy; has a happy family. He is sweet, cute… has an impish side to him also. He is a very regular guy. I was impressed by his values. That appealed to me. Shibu (short for Shibashish) and Rumi represent the archetypical middle-class family. They have the basic values intact. They are happy with whatever they have. Sometimes there are temptations but they come out of it. Sometimes there are misunderstandings and struggles. At the end of the day their bond is very tight. There is a Shibashish and a Shibu also, we get to see both sides. Shibashish has his aspirations. Shibu is the middle-class guy. He is a hero because he knows what is right, and he will fight for it. He will do anything to uphold the values. This guy is very sweetly romantic. It is a very sweet film, and may remind you of films like Yes Boss.

How is it like working with Rukmini? After Dev, you are the first star paired with Rukmini now!

The expectations are really high! She is very hardworking; very dedicated. At the mahurat she came all ready, having done her homework. She was carrying her script and a writing pad. Every script page had notes.... And our characters are heavily in sync. I was working with her in a film for the first time. She was prepared. I got the vibe in our photoshoot only. Incidentally, we had done an ad three-and-a-half years ago.

What does Switzerland mean to you?

You are wearing the sindoor once again after Chaamp…

(Laughs out loud) Whenever I get a new hero, I first get married… and then we go in reverse. Then, you know, we pull out the guns (smiles)! So I can tell where Abir and I will land up eventually (laughs out loud). But it first starts off on a very good note!

You started off dancing barefoot (for the Switzerland song), then you wore flats while dancing…

For the first few minutes I was barefoot, and then we decided that I can put on some flats. Everyone else was wearing heels and shoes… but I was not. However, I am actually more comfortable dancing in heels. It gives me the feel and stature also… I feel much more stable surprisingly. On a normal day also, I am much more comfortable being in heels rather than in flats. Maybe because I have modelled for so long.

He is so helpful, technically sound. It has been two years for me in films, and he understands me… he is very helpful, to the extent that he is also willing to share food (smiles). He is so successful… he comes as a team player… and gives you your space.

How do you feel wearing the sindoor look?

It does not evoke any emotions of marriage in the near future (smiles). It is not just about the sindoor I am wearing on my forehead. It is about how you build the character. One has to feel the vibe of the character. If I am convinced that this is the person I am playing, then I am absolutely convinced wearing my sindoor. That’s why I enjoy the shuffle. It’s more about believing in the character. The rest is external; of course it adds. Talks were going on for the last two films (with Jeet’s production house), which I unfortunately could not do. This time when I got the call, I said, ‘Let’s just do it’. Third time is the charm. Jeet and his family are such warm people... the way they took care of us.

Are you missing Dev in this film?!

Like I said, I am very much convinced that I am married to Shibu (in Switzerland)! It is not about missing. Of course he is always there in the capacity of my friend and family. He is my go-to person anyway. For Switzerland, he had said that it was a lovely script and that I should go for it. Of course, my mom also felt the same. If there are any problems regarding the character or if I cannot crack a certain scene, I do go to Dev. I ask him what he feels, and I discuss. Somehow or the other he is there, not necessarily on the set, but of course…

Yes! For the past couple of days, I have had no make-up on. I used to walk into the sets and I would take 15 minutes to change. Today I got to dress up, a tad. But again, I am sticking to the character. We planned the sari look around the character I play. We are keeping Rumi’s aesthetics in mind… that’s how we have built the look.

What does Switzerland mean to you?

How do you see Rumi?

Can you connect with the character on some level?

I am very protective about my near and dear ones. I am an extremely family-oriented person. I like taking care of my people. Rumi is also there for her own people. I have done a workshop with Sohini Sengupta for the film. She has been a great help.