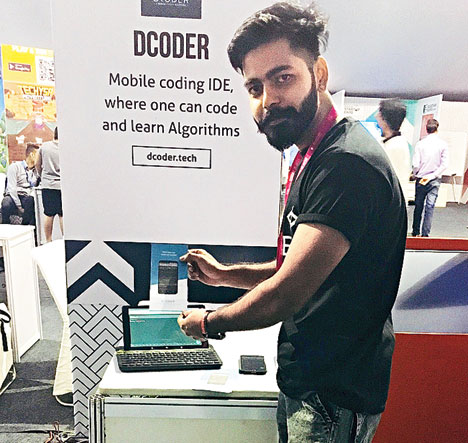 Did you know that Facebook, Google, WordPress and Snapchat were all started by students? Starting a business while still at school or college isn’t easy, but it provides the best building blocks for any future entrepreneur. While working for others will give you experience, hands-on learning is always best. And when your brainchild also becomes your source of income, the dedication you put in is not clocked by office hours — that is where success lies.

Abhik Saha is only 16 but he has already developed eight apps (available on Google Playstore) as well as Origgon, a search engine that gives personalised and human-curated results by using social media. His introduction to web design at school when he was 13 sparked off his interest and he taught himself programming. With a little help from online tutorials, he built basic software, learnt app development and tackled logical problems. He then decided to create a personal programming language, which he calls lino.

While researching for lino, he realised that he spent more time looking for appropriate information than learning — a problem many of us can identify with. He built Origgon as the solution. “The aim was to build a search engine that reduces spam and irrelevant content, and also values good content from smaller websites.The use of AI [artificial intelligence] along with human ranking signals was the concept behind the development of Origgon,” says Abhik, an alumnus of Don Bosco English Medium School, Oodlabari, in North Bengal.

Origgon had its early beta launch in 2017. Now, his search engine gets a daily traffic of at least 5,000 visitors, mostly from abroad.

Ankush Chugh, 24, is the CEO of Dcoder — a mobile code compiler where one can execute code snippets and learn algorithms on one’s mobile. While he was studying engineering in Jaipur, Ankush felt the lack of a laptop to practise his coding on. That is when he came up with an  app through which you can learn to code anytime, anywhere. With Dcoder’s compiler, one can learn programming in more than 13 programming languages.

“Since everyone owns a mobile and my app allows people to code on the go, this will save time and be convenient,” says Ankush, who joined a firm after graduation but left soon after to invest time in developing his app. Right now Dcoder has 8.5 lakh users, mostly from abroad.

Somrwita Guha started her business at 19, while still a student at Jadavpur University, Calcutta. Papercup is a product design company that sells a variety of things — from notebooks to fridge magnets, fashion accessories to home decor items and coffee mugs to hand painted kettles — online (www.papercuponline.com). Started as a hobby, she grew increasingly serious about the business and went for a course in Entrepreneurship Management to XLRI, Jamshedpur, after graduation. “It was a diverse batch of budding entrepreneurs and established ones, including a 54-year-old classmate from whom I learnt a lot,” says Somrwita.

From poetry slams to exhibitions, campaigns to charity events, Papercup goes beyond the usual to sell their products. They have also started retailing through some bookstores and cafes in Calcutta.

Siddhika Ghosh Chaudhuri started the Wise Owl Cafe in Calcutta when she was 21 years old, right after graduating from the Indian Institute of Hotel Management in the city.

“When I was working on the idea of the cafe, there weren’t many coffee shops in Calcutta that provided breakfast, lunch and dinner. I wanted to offer fresh food as well as a place where you could chill, without having to burn a hole in your pocket,” she says.

While recruiting for her coffee shop, Siddhika found that most hotel management graduates were not interested in joining a stand alone restaurant. They were only interested in five star hotels — possibly because these paid handsome wages. So Siddhika set up her hospitality institute, Krystal School of Excellence, that had very reasonable fees. She hoped that would encourage its passouts to accept the moderate pay at stand alone restaurants.

Kanav Singla, the CEO of Adloid — a platform for augmented reality technology — started his business when he was 21 and a student of IIT Delhi.

While helping out friends who owned a start-up, he got to meet a lot of people in the e-commerce and business sector. He realised that these people needed a platform to showcase their innovative products but no one had put that technology on the map for them. So he decided to start his own augmented reality platform where you could visualise your future product in a real environment to see if it would be worth the purchase.

“In college I got a lot of exposure to big CEOs of huge corporations since many IIT alumnus are in big positions. I had personal access to them so I would keep in contact and ask them about their business and knowhow. That helped me a lot,” says Kanav.

Rahul Maheshwari, 23, started his first venture while still studying at Hansraj College in Delhi but did not find his niche until he joined the match-making industry.

“I worked in the dating space for quite some time and I figured out a loophole. I realised that many people like to meet prospective dates and have a one-on-one conversation instead of interacting virtually as is the norm these days. That is when I decided to start Speed Meet and give people that space and that chance,” says Rahul, who has organised 85 speed dating meets till date.

Speed dating is a new way of meeting like-minded people. At these meets, you are introduced to single people of various age groups. There is a strict screening process that allows the right sort entry while keeping out the creeps, the bane of most match-making sites.

All these youngsters found a gap in the market and innovated to fill it. A smart way of doing business.