Bhot is the matter

Elections past, their beauty, duty and humdrum humour 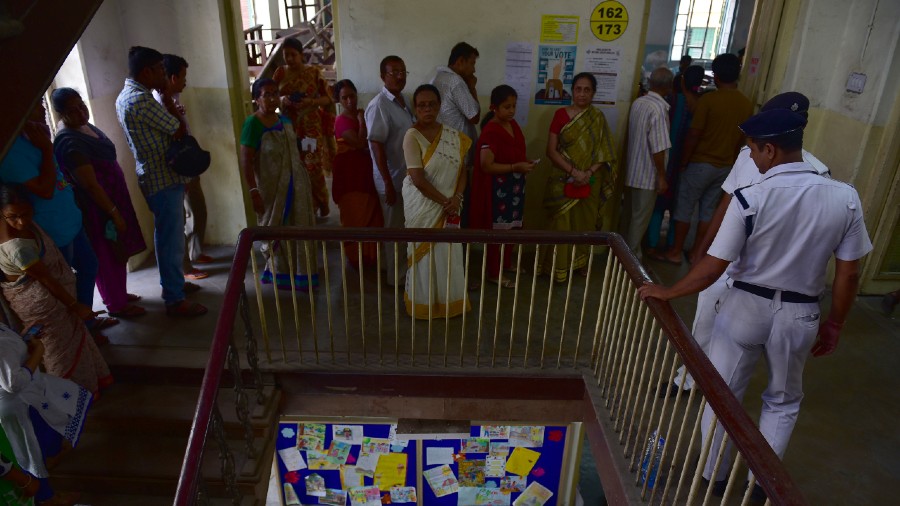 Which Indian bird is the earliest riser among avians? Is it the rooster? The crow? Or the mynah?

The answer is NOTA. None Of The Above.

Decades ago, to my young eyes, India’s early bird, metaphorically speaking, was Chandidadu.

Each day, this wingless septuagenarian would get up before the rooster crowed, complete his ablutions, eat a quick, spartan breakfast, pick up his medical bag and be off examining “worms” — his beloved patients.

But on one particular day every five years — Election Day — Chandidadu would rise even as the rooster snored. This day, he would spend some more time in his bath, emerging with a dab of talcum powder still visible near his ears, choose — with great care —  a crisp, milk-white panjabi and a dhuti and be off — this time, to be the earliest voter at his designated polling booth.

If he was ever asked to explain what his hurry was, he would reply, with great satisfaction, that it is the responsibility of every citizen to check the pulse of democracy.

Democracy’s pulse could be diverse; but its rhythm was always enchanting.

An elderly member of my clan, a victim of displacement during the partitioning of Bengal before Independence, spoke little about the riots in the Calcutta of the late 1940s — he had found shelter in a burning Manicktala — but he never tired of speaking about 1957: the year of India’s second parliamentary elections. There could be no greater proof of a young nation’s commitment to embrace people who had lost their roots, he said to me many years later, than that ink stain on his finger.

“Bhot” set the pulse racing for didas too.

An apocryphal story that I had heard from another branch of my family concerned an elderly, shy, illiterate matron whose husband was a devout Gandhian. This dida had been taught by her husband that the two most sacred things of life were truth and the vote. The lady honoured both principles in an ingenious way. She did not miss voting in a single election — big or small. But on each occasion, she would return and lock herself up for a few days, opening the door a little to accept meals and water. That way, she would not have to answer or, horror of horrors — lie — when her relatives pestered her with questions about her political allegiance.

Para lore — a rich source of life and times of a vanishing Calcutta that, alas, is yet to be archived — had also lent immortality to another bhotdida, but for entirely different reasons.

This woman, the mother of a daughter, was known for her formidable ability to hold up a voting queue. No, she wasn’t trained in the dark art of capturing booths. (The comrades held doctoral degrees on this subject, especially in Bengal’s villages at the time.) The dame’s claim to fame was her unmatched ability to fuse the personal with the political. She would crawl — tortoise-like — taking one cautious step at a time, scanning the chiselled, fair faces of the jawans on election duty, taking copious notes in a little red notebook. She was on the hunt for a jamai for her daughter among the sentinels who guarded democracy. No amount of requests or barbs from the long line of sweating voters trapped behind her could bring a spring to her steps.

The word on the street was that her daughter went on to marry a rather portly, dark man. Dida, her heart in pieces, continued to vote — she moved far quicker than before.

Such is democracy’s spell on the elderly.

But is the spell weakening?

A survey conducted before the last Lok Sabha elections found that 45 per cent of young voters had decided not to travel home to vote. A significant number of millennial voters had also reported to have doubts about the EVMs.

I wonder what our bhotdadus and bhotdidas would make of the apathy of young voters towards that magical indelible ink as Calcutta heads towards the EVMs. Or the fact that this septuagenarian democracy’s compact with its foundational vision of an inclusive, pluralistic, secular polity is now fraying.

Chandidadu may not have had a poultice to cure the disease that has afflicted our democracy. But he wouldn’t give up without a fight. If he were around, I am certain he would wake up all the neighbours in that early light and herd them towards the booth to resuscitate democracy.