The Telegraph tunes in to an exhibition of sounds 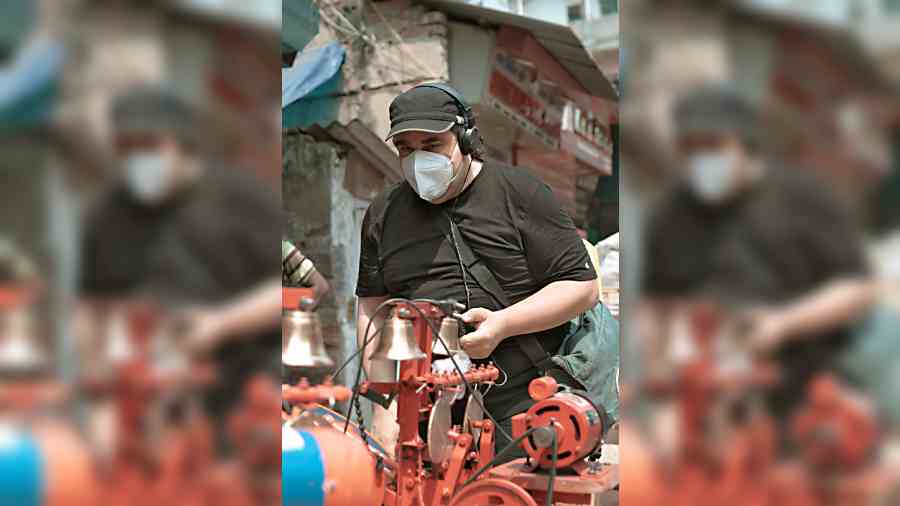 Around 40 people sitting in a dimly lit hall filled with familiar sounds — the chugging of a train, the tinkling of the tanga bells, the buzz of a marketplace, the rickshaw-pullers’ crring crrrring, all of it emanating from an ektara, a ghatam, pakhawaj,  daf, manjira, morsing, violin, synthesiser and more. There is a vocalist, too, adding little touches. On the large screen in front flit city stills.

“The music is a mere translation of what an eye from outside has seen and heard,” says sonic artiste Ignaz Schick. He continues, “The visual elements are called graphic scores. So the architecture I come across, the advertisements that I see, the colours that I come across are all translated into musical scores.”

The event is City Sound Project. The venue, the Goethe-Institut/ Max Mueller Bhavan in Calcutta.

Schick, who is based in Berlin, Germany, has been to Calcutta twice this year — once in April and now, in December. He has been on what he calls “an audio trek”, which is really all about listening to and recording the sounds of the city at different times of the day. He had done something similar in Moscow in 2018, where Astrid Wege, the director of Goethe-Institut/Max Mueller Bhavan, Calcutta, was posted. “This time, the project is happening in three places — Calcutta, Colombo and Dhaka,” says Wege. He adds, “The project is all about diving into the fabric of the city.”

Says Desai, “We followed visual cues given by Schick. The clues were an indication of the kind of noise, tone, length and volume at which we were supposed to play. Within these parameters, we had the freedom to experiment.”

Schick had explored many a nook and corner of the city. He went to the flower market of Howrah, wherein he absorbed not only the sounds but also the vibrant colours all around. He took a boat ride on River Hooghly, travelled in local trains and trams. “I explored the market in Burrabazar; I went to a jute mill and listened to the sound of the machines. I sat listening to the sounds in a garage as they fixed cars and bikes,” says Schick. He has also visited mosques, the temple in Kalighat, the idol-makers of Kumartuli and the Botanical Garden.

He has clicked hundreds of photographs of the city — clothes drying on the iron guards along footpaths, the high towers one can see from the EM Bypass, the marvels of Vivekananda Setu, an electric pole with a ganglion of wire.

Says Schick, “For you, those wires might mean something else but I used them to create graphic scores. The wires were a signal for the musicians to play a glissando (musical scale). The blue coloured shapes that I came across everywhere — possibly it has political meanings — meant a pattern, a colour code that I translated into a crescendo in my composition.”

Orange, blue, black, white, grey, yellow and green are some of the colours Schick picked from what he found across the city; he assigned a colour to each musician. They would follow the colours and play when their turn came.

“The dynamics of this city is quite interesting,’ says Schick. He continues, “It has a strange combination of energy and a laid-backness that came to be converted into music. Its food and colour, its crazy sounds and noises. I often used to get annoyed by the senseless honking on the roads but that is what it is. A pattern.”

The sound of hammers falling on marbles and granites near Nakhoda Masjid and of animals being butchered in Beckbagan. Schick says, “The city lends itself to so much sensual stimulation, not only to the ear but the eye as well. There are many layers.”

He says, “Calcutta is just one city I have explored as of now. I want to go to Mumbai and Delhi. India has a wild character, quite different from that of Berlin, where everything is regulated.”

Schick has not got the opportunity to explore the nightlife of Calcutta. That is for another time. Maybe, when he is going to come back in January for the final show of this project. Maybe they will call the night project Notes from the Underground.