Advertisement
Home / Culture / Twin plays based on the journeys of women

Twin plays based on the journeys of women

SPCkraft and Blooming Eye, presented two plays — Youniverse and Talking Wombs in association with The Telegraph 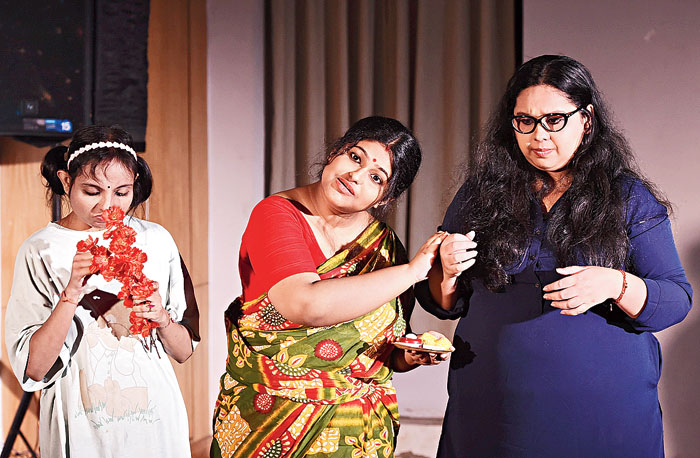 "Youniverse was about a point of time when I had never travelled alone and there was a pre-conceived notion in my family that a girl should not travel alone because the world is harmful," said Shweta Dey, the writer of both the plays.
Pictures: B. Halder
Priyanka Roy   |     |   Published 02.10.19, 02:05 PM

SPCkraft, an interdisciplinary art collective led by Sujoy Prosad Chatterjee and Blooming Eye, presented two plays — Youniverse and Talking Wombs — in association with The Telegraph at ICCR. Both plays mentored by Sujoy, were written by Shweta Dey.

Youniverse was a travel-solo and was performed by Shweta and narrated in the form of a monologue mostly but was accompanied by a few actors and a montage displaying pictures of her travels within Bengal, highlighting the transformation it brings about in a person. Shweta took us from Burdwan’s terracotta temples to Bandel’s churches and the synagogues of Calcutta, as she went on a soul-searching journey. She wove her narrative with a more personal journey of heartache and the lessons she learnt in the process. The religious iconography that peppered her travels taught her lessons and evoked various realisations within her — her travel through Burdwan taught her to not wait too long in life for anything, the churches of Bandel taught her the essence of forgiveness and the synagogue gave her a realisation of how places have memories. Her narration also drew attention to issues concerning women and certain socio-religious practices. 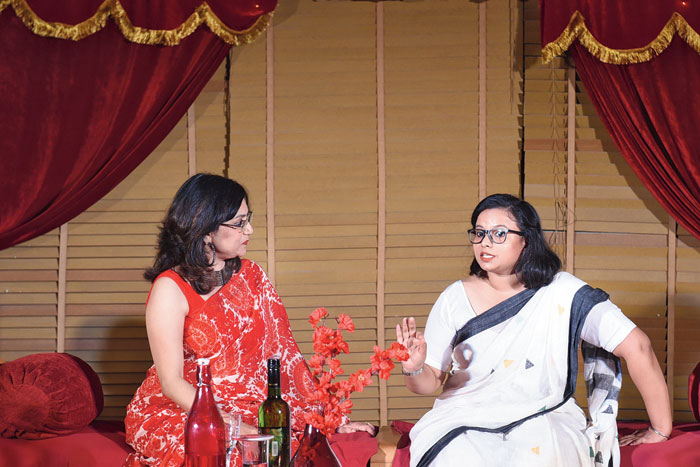 “I have had a lot of fun directing it, but I am a bit nervous about presenting it also. These are very well-known characters and bringing them back to life and talking about them in the context of women’s emancipation was a very challenging thing for me,” said Madhuwanti Basu, who directed the play Talking Wombs.
Pictures: B. Halder

While Youniverse was a cathartic narrative of self-liberation through self-realisation, Talking Wombs was a non-proscenium act based on the concept of social issues, with a focus on women’s liberation. Directed by Madhuwanti Basu, the play brings in various characters of history and the recent past like Gauri Lankesh, Rohith Vemula, Kamala Das, Ismat Chughtai, Noti Binodini, Noor Inayat Khan and Jaddanbai, to show the fight some waged against narrow-minded social practices. The act unfolded in Sujata’s drawing room where she arranges a Red Tent party with her friends but instead slips into a nap, as her friends are unable to arrive on time. In her sleep she encounters each of the aforementioned characters, who with their stories of individual battle, inspire her to fight for her rights as a woman, be it in the framework of contemporary problems such as sexism at the workplace and the repressed desires of a woman.

Just like the first play that shows a woman’s transformation brought about by travelling, the second one shows the transformative aspects of a woman as she takes on various social malices.

The background score for both the plays were by Sharmi Chakraborty and Madhwanti Basu and scenography and lights by Ayan Mukherjee. Raising significant questions on prevalent issues through experimental theatre, both the plays ended with loud claps and cheers from the audience.