FLO members have a tryst with the city’s architectural heritage 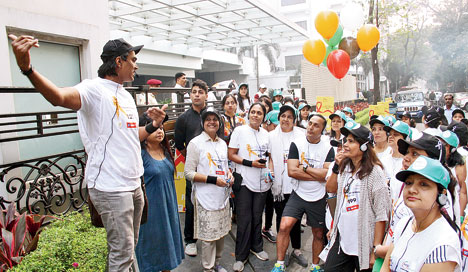 It was a Sunday morning with a difference. At least for a group of 200 women, all members of the Ficci Ladies Organisation (FLO) Kolkata. They were up and ready to hit the road at 5.30am, some even warmed up at an early Zumba session, with a single agenda on their mind — to know the heritage of our city better.

The occasion? A Colonial Heritage Walk to raise funds for cancer patients, organised by FLO Kolkata in collaboration with Kanoria Foundation, Kotak Mahindra Bank and SREI.

OF THE CITY, FOR THE CITY

For over a decade now, I’ve had the honour and privilege to take visitors from across the globe around the various wonderful parts of this crazy city. But nothing warms my heart more than watching Calcuttans enjoy the city as much as, or sometimes even more than, the visitors.

So when Sunita Kanoria of FLO Kolkata got in touch with me about partnering for their big event, we at Calcutta Walks were all excited. This was a great opportunity to share the city with its residents who would have a much more profound sense of revelation when we acquaint them with stories of old Calcutta.

The area chosen for the day was Dalhousie Square, which the colonisers referred to as White Town — an area non-Europeans were always wary of setting foot on. A Sunday morning Dalhousie Square is a wonderful experience as you can enjoy the city with as scarce a population as there probably would’ve been under the British.

For them the city began and ended with White Town and therefore had bedecked it with as many amenities and facilities as possible — street lights, benches, sewage system, large pavements, the works.

THE HOTEL THAT HAD IT ALL

We started off with acquainting the bunch of more than 150 FLO Kolkata members along with Bolly actor Rahul Bose with the Great Eastern Hotel’s long and glorious history. The walkers chuckled when informed that legend has it that if a man visiting the hotel decided to get married to a barmaid (who were all sailed in from England), he could do his entire shopping inside, hold all his functions inside and walk out from the other end married, as every conceivable item of luxury was available within the hotel’s compound. From shoemakers to musicians, bakers, jewellers… you name it.

ALL EARS TO HERITAGE

This was a really enthusiastic group and was holding on to every word we were speaking, based on the many stories of colonial Calcutta. One of the walkers squirmed when told that there was a guillotine parked in front of the Lalbazar Police Headquarters where Indians were routinely chopped up for transgresses against the British, merely to set an example for others planning to dare.

The walk route had several stops and many a stop-by. From one heritage structure to the other, everyone keenly listened to the history and folklore, going click-click with phones and DSLRs to make memories. On the map were the famous Peliti’s restaurant, the Raj Bhavan — both the East and the North gate, the Rangers’ Club, the Esplanade Mansion built by the Ezra family, Currency Building, St. Andrew’s Church, Writers’ Buildings, Laal Dighi, old Fort William, the GPO and St. John’s Church.

LION GATE AND OTHER STORIES

The story of Raj Bhavan and its ‘lion gate’ or shingha dwar caught the fancy of many. When they came to know that the British soldiers did not like it when the local population replicated the lion motif of the gate in their own homes, they seemed very excited as many of them have seen such shingha dwars in their parts of the city and at that point had learnt the origin of those gates — the Raj Bhavan gate made in 1797.

We also spoke about the history of the Writers’ Buildings and how the current government has been working on restoring its original glory. The Laal Dighi was another source of amused conversation as the explorers came to know how this promenade used to be a courtship ground.

THE PRIDE OF NOSTALGIA

A sense of pride swelled in people’s hearts as they finished the tour, learning about Calcutta and her past glory. How Calcutta has many firsts — it was the first city in Asia to have gramophone records, a tramway system, the first fingerprint bureau of the world, the first piped water supply, ambulance services… all these harked back to a golden era of Calcutta.

That’s the best part of getting to know your city better and learning about her heritage I feel, as it’s the pride that people feel in invoking that nostalgia that counts in the end.