Whisper of the wild in Alaska’s Denali 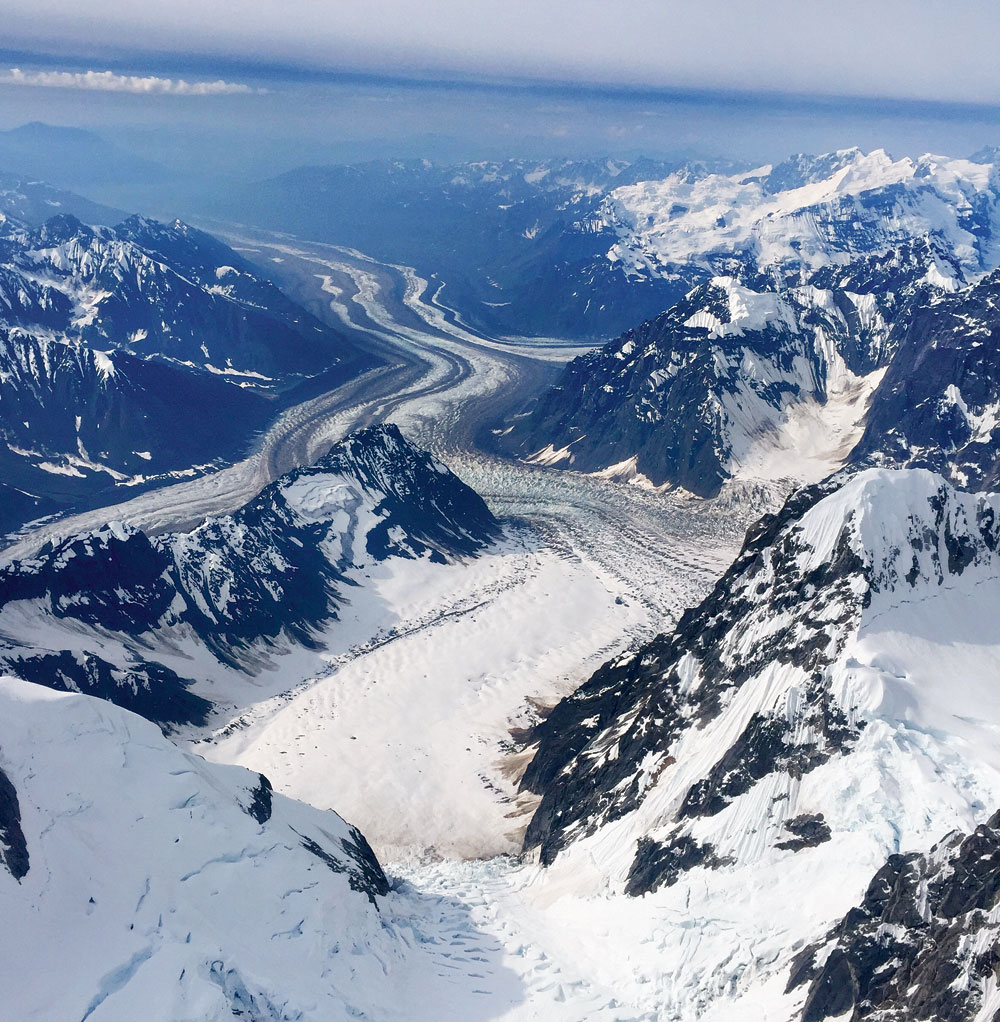 Denali National Park can be reached by road, rail or air — Fairbanks being the closest airport, located 125 miles north of Denali. However, the journey from Anchorage to Denali by Alaskan Railroad is one of the most scenic rail routes in the world. The Gold Star service carriage with its glass dome ceiling is a little more expensive but is highly recommended, given the once-in-a-lifetime experience of the breathtaking views. The journey time is four to five hours and it stops at Denali Park Visitor Centre, before continuing to Fairbanks. Anchorage can be easily reached from other US cities that have international flight connections; and therefore the railroad was a natural choice for our return trip.

I remembered the start of our journey — from Kenai Fjords, located along the southern coast of Alaska. Kenai Fjords is accessible only by the sea route that goes from the port of Seward through the glaciated fjords of Resurrection Bay. We stayed overnight at Seward, before we had made our way to Denali by road. That seemed a long time ago but in reality the length of our Alaska trip was only eight days. The landscape in Kenai Fjords was in sharp contrast to Denali — abounding sea life with different species of whale and the glaciated rainforests lined with verdant lichens and moss. I realised that Alaska had several inside stories — it was like discovering a new experience each time, Denali being perhaps one of the best.

Fishing in the picturesque Wonder Lake
Picture by Chandana Ghosh

A bear spray clutched in one hand and a trail map in the other, I started my solo trek to Quigley Ridge. Birds chirped from the bushes alongside, butterflies flitted past and colourful wild flowers lined my path. As I gained height, I paused to view the Denali National Park and Preserve in Alaska. Its natural beauty had me in its spell for a few minutes. I could hear my laboured breathing in the overwhelming sound of silence as I followed the uphill trail marked on the map.

It was mid-morning and I had covered less than half the trek to Quigley Ridge when I sighted a mound of droppings behind me while posing for a selfie. I could hear in my head the warning voice of our guide: “When droppings are there, beware a bear or moose maybe near.” My newfound courage and confidence slowly ebbed and reality beckoned me towards the lodge… with my unused bear spray.

Denali National Park and Preserve is the third largest national park in the US. Stretching across six million acres of wilderness, the land of the midnight sun is home to the tallest peak of North America — also known by the same name — Denali or ‘The Great One’. Previously known as Mt McKinley, the US Senate officially renamed it in the native dialect in 2015. Summer months, from mid-June to mid-August, is the best time to visit the place. Wild flowers colour the undulating valleys and the hillsides wear carpets of violet fireweed that springs to life during these months. Braided streams and kettle ponds punctuate the tundra vegetation that is fed by the melting permafrost. Snow-capped peaks rise up from the valley floor, creating a pretty panoramic picture. A variety of wildlife and birds reside in this park… spotting them can be both exciting and unpredictable.

This was not the first time in Denali that I had a “bear scare”. Earlier that morning, I awoke to the sound of excited voices outside my log cabin. We had been warned that we might encounter grizzly bears on the property. As a safety measure, the practice was to keep the cabin door unlocked, so that it is possible to slip into any of the nearby cabins if that were to happen. I gingerly opened my door, excited and apprehensive, that we had a grizzly visiting our camp.

But it was a different kind of a surprise.

In Denali National Park there is only one road and only the shuttle service park buses are allowed to ply along this 92-mile road. It was along this park road that we had several encounters with wildlife.

“Grizzly bears, commonly found in Alaska, thrive on berries to be found aplenty during summers,” our driver-guide introduced us to the wildlife in the region. “Caribous, wolves, moose, Dall sheep…,” he suddenly stopped and veered the bus to a complete halt on the edge of the mountain road and motioned us to remain silent. On one side, there was a steep fall to the valley floor, on the other side we were flanked by the mountain slope, sprayed with white and yellow wildflowers.

In front of us there was a huge brown grizzly bear, on all fours, with his back towards the bus. As instructed, we were rooted to our seats, in silence, totally motionless. It took me a few seconds to spot a lone cyclist — frozen in action, wide-eyed with a look of fear on his face. Camouflaged in the colours of the flora at the far end of the road in front of us, he was just a few yards from the bear that was facing him. I held my breath and could feel a tightness in my chest as the bus veered to a complete halt, carefully balancing its weight on the edge of the road. The grizzly turned his attention towards the bus and started making his way towards it. As the bus diverted the attention of the bear, the biker slowly slipped past unnoticed. The grizzly bear strolled alongside the bus and down the mountain slope. I was silently relieved that during my solo trek, I had “bearly” missed a similar adventure.

A moose coming down the mountains
Picture by Chandana Ghosh

Being a clear day the pilot had decided to fly us over the Alaskan mountain range and give us a close view of Denali. Flightseeing is more common from the quaint town of Talkeetna, located 150 miles south of Denali, than from inside the national park. Strong mountain winds and unpredictable weather conditions make the ascent from inside the park difficult. Since our scheduled flightseeing from Talkeetna had been cancelled the previous day, this came indeed as a surprise. According to local folklore, you have to be the “Lucky One” to sight the “Great One”.

Kantishna Air Taxi was located a stone’s throw from Denali Backcountry Lodge where we were staying. Our weights were checked and headgears with microphones adjusted as the pilot decided our seating arrangements. The 90-minute flight held memories of a lifetime. Swooping down on the Denali National Park, dotted with myriads of kettle ponds, following the McKinley River and then tracing it to its source — the Muldrow Glacier. But the most memorable moment was when the pilot held us suspended mid-air — face-to-face with Denali, more than 20,000 feet high, a monolith of ice glowing in the rays of the sun.

As we descended, Ruth glacier looked like freshly scooped-out ice cream with the lateral moraine strewn across like chocolate chips. The flight time being the same, you can choose to be in the air or make a descent on this glacier, but, of course, the pilot always has the last word.

Flightseeing was only one of the many activities in Denali National Park. Others included wilderness camping, trekking, ATV tours, berry-picking trails, gold panning along the river, fishing in the picturesque Wonder Lake, cycling and mountain biking. Every evening the guide-in-charge would brief us on the following day’s activities and accordingly we signed up for our preferred activities. That day I had signed up for two activities — flightseeing and Quigley Ridge trekking. Signing up for two activities was less common and there was a chance that I might end up trekking alone. Realising the implications of that, however, hit me later in the trip.