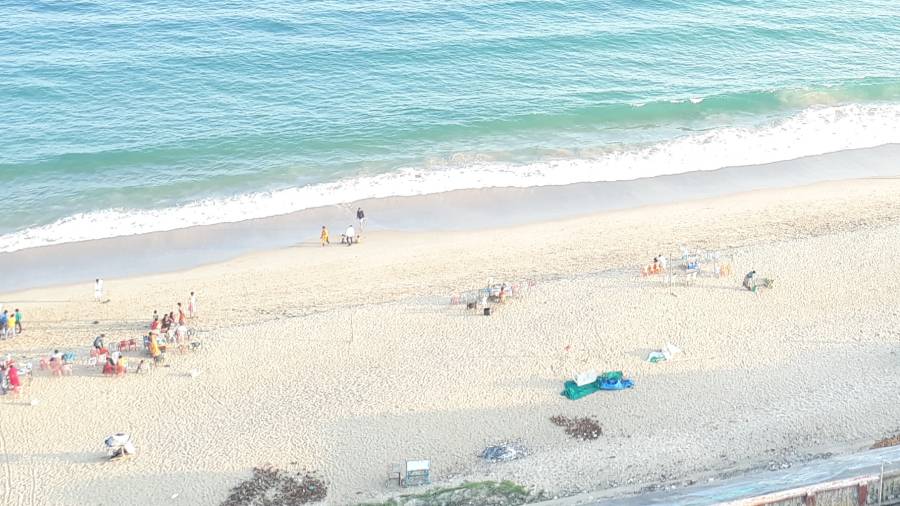 View from the lighthouse at Gopalpur
Telegraph Picture
Sudipta Bhattacharjee   |   Published 29.11.20, 12:10 AM

Mask, face shield, a PPE outfit for the middle seat and we were set for the 45-minute flight to Bhubaneswar. Air turbulence, usually a major worry every time I fly, was negligible in comparison to the utter discomfort of travelling the “new normal” way.

The three-hour drive from the Odisha capital to Gopalpur-on-Sea was a breeze. The lush, rainswept landscape, past the unending expanse of Chilika Lake, brought us to our staycation, a sprawling beach resort. We longed for communion with the sea, but Covid-19 protocols ensured a prolonged entry procedure. A full PPE-clad reception committee created an extra-terrestrial ambience. Thermal screening and shoe and baggage sanitisation over, an oxymeter was clamped on the forefinger and the Aarogya Setu app checked. Finally, we were allowed to check in digitally.

The view was spectacular. The fact that we were standing there gazing spellbound at the aquamarine expanse of the Bay of Bengal was all because an Italian, Signor Maglioni, established the resort in 1914, making it possibly the first beach resort in the country. Not surprisingly, its architecture has a distinct Mediterranean flavour. After Maglioni, however, the building was left in ruins till a big hospitality chain took it over in 1947 and hosted VIP guests, including several prime ministers. Battered by the forces of nature, especially the super cyclone in 1999, it was closed down in 2002, but taken over and renovated by another group in 2011.

We lapped up these nuggets of history from our genial host, Saroj Solomon, as we dined on fabulous baked crab, never mind the pocket pinch. Having left home early, with hardly a morsel en route, we ate ravenously, and then headed for the beach, strict social distancing enforced at every step.

Just to close one’s eyes and hear the surf was therapeutic enough to drain the dregs of the six-month lockdown from our system. The sun was about to set behind a cluster of minarets to our right, even as fishermen prepared to go out to sea for the night’s catch.

Usually, resorts are packed with noisy tourists and serenity is a far cry. But one of the fallouts of the pandemic is the apprehension about travel safeguards, keeping most vacationers away. That proved to be a bonus in this picture-perfect location.

To our left was a red-and-white lighthouse. I have been fascinated with lighthouses from the time I was a child, ever since I read the story of Grace Darling, the daughter of an English lighthouse keeper, who saved the lives of the survivors of the shipwrecked Forfarshire in 1838. We headed to the Gopalpur lighthouse the next day, only to find a “No entry” board and a warning that trespassers would be prosecuted. Befriending the German Shepherd guarding the gate, we sneaked in. The gentleman in charge explained that a radar was installed at the top and no one was, therefore, allowed in. The view from the top of a lighthouse is exhilarating, we know from experience, especially after the steep climb up a spiral staircase. A pity that it is no longer permitted!

We also visited the Taratarini temple on the Kumari hills on the banks of the Rushikulya river the next morning, thanks to our host. It is a Shakti peeth in distinct Kalinga architecture which at “normal” times would be teeming with devotees. The drive through the sylvan Ganjam countryside was a panacea for our lockdown-shackled senses.

Back at the resort, we made the most of our fleeting stay. Walking barefoot on the lawns was a delight. The strolls on the edge of the breakers made us wish we could stay on forever. Covid-19 seemed such a far cry. A quaint stall, serving free masala tea and muri to guests every morning and evening, stood at a corner of the property on the beach, adding to the charm of the twilight. Its kettle-shaped board was telling — the resort’s Tea Stall, est 1914!

As a final tryst, we were fortunate to visit the sprawling Gopalpur Military Station, which includes the army and air defence colleges, chatting late into the evening with a friend by the sea, watching the lights twinkle at the distant harbour. Listening to the waves crash on the shore, inhaling the ozone and gazing at a moonlit sky, thoughts of the pandemic and Darwin’s theory receded into the far recesses of the mind, knowing full well that it would surface with added vengeance as we left for the airport and back to home hibernation.