What to eat and where to stay in Istanbul 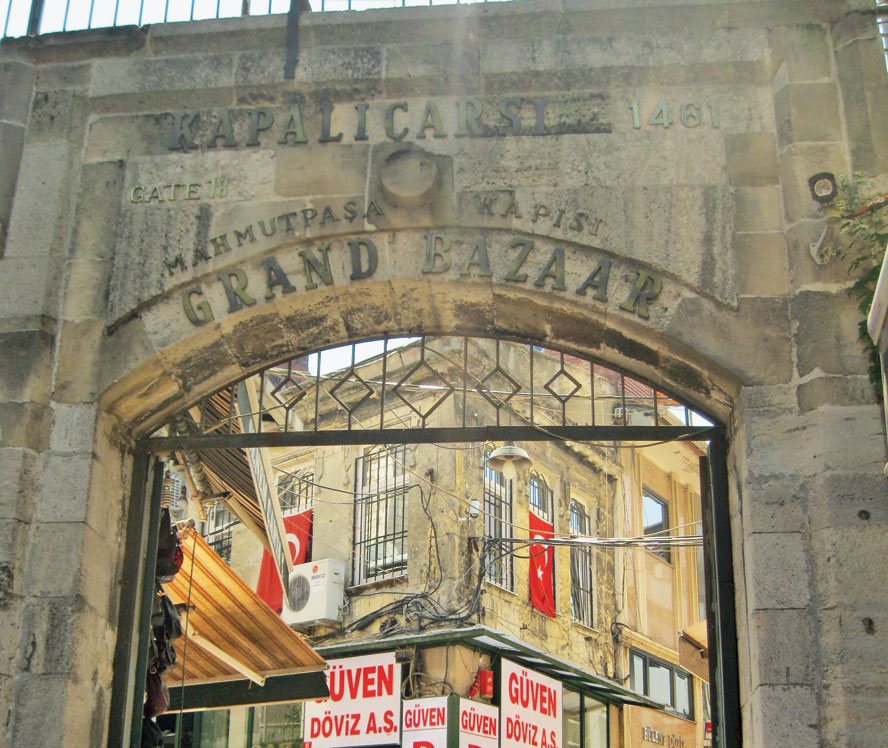 Grand Bazaar may be a tourist trap but it’s an enchanting one with alleys of shops and cafes selling everything from hammam towels to silver coffee cups, gold and textiles
Picture by Karen Anand
Karen Anand   |   Published 09.03.19, 05:21 PM

Stay in Istanbul ranges from boutique hotels to decidedly upmarket ones. Sirkeci Konak Hotel is a lovely one with 52 rooms overlooking the Topkapi Palace gardens, now called Gulhane Park. It is quieter than a lot of hotels in the Old Town and has a very respectable restaurant serving Turkish regional specialities. The Hamam (Turkish bath where much scrubbing and soaping happens) and swimming pool are great bonuses.

On the top of the scale is the Ritz-Carlton. If you are in need of real luxury, perfect location and meticulous service, then this is the place. The front rooms have unparalleled views over the Bosphorus. The Club floor pampers you with complimentary breakfast, snacks, a light lunch, tea and evening drinks… as well as plenty of Turkish delight and tea at any time of the day or night. Their restaurant, Cintemani, on the ground floor, serves classic Ottoman and Turkish fare — it’s a bit old-fashioned but it works. If you want to try a hammam experience, you can supplement it with a fabulous massage. You can even have a couple one — something which is not possible in traditional hammams in the city. Taksim Sq, Istiklal Caddesi, the Dolmabahce Palace and many other attractions are just a short walk.

Istanbul is a large city of 13 million people and is a unique mix of European and Asian cultures. In recent times, as historically in the past, the city has had its share of unrest and bad Press. It is Turkey’s largest and most monumental city as well as the commercial hub, but it isn’t the capital (if you are wondering, the capital is Ankara).

If you walk down the Istiklal Caddesi, one of the main streets, in what is commonly known as the Beyoglu (the ‘g’ is silent) any evening, you will get a feel of the energy. It is almost like being back in India. No guidebook can explain this frenzy. The taxi drivers here range from “distracted” to “dangerous”.

The Asian side of Istanbul is known as Anatolia. It’s the “ethnic” or more traditional side of the city. Food follows similar patterns — spicier with bolder flavours on the Asian side and subtle, Greek-like on the European side with much talk about their Ottoman ancestry and recipes dating back to the 15th and 16th Century Ottoman court.

If I were to choose one great stand-alone restaurant in Istanbul, I would go to Jash situated in a street in the Beyoglu area. Owned and run by the utterly charming Dyek Miricanyan who looks more like a well-seasoned actor from The Godfather than an entrepreneur, Dyek is Armenian in origin and serves what he calls “Istanbul cuisine”, which is, I suppose, a mix of all the communities and styles that have made this city into the cosmopolitan place it is. Greek, Armenian, Jewish, Anatolian and a smattering of French.

You’ll find all the regular Turkish dishes here such as the famous Turkish cheese plate and all the appetisers — a superb Imam Bayildi (eggplant cooked in olive oil with onions, garlic and tomato), dolma-stuffed mussels, topik (an Armenian appetiser made with mashed chickpeas), Circassian Chicken (poached chicken served with walnuts and garlic and the best taramasalata, a paste of smoked fish roe made with breadcrumbs and olive oil)… the best I have had in many years. Main course dishes are many but the lamb stew served on a smooth eggplant puree, which is I believe traditionally Armenian, is pretty special. The restaurant is intimate in size, with an interesting collection of antiques and they also serve excellent raki.

Antiochia is a small, trendy restaurant in Beyoglu, which is a bit of a trek to get to but it’s worth it: The executive chef of the Ritz-Carlton told me that this was one of his favourite places. Here the food is from Turkey’s Hatay region. For starters, they serve Nar Eksili Cevizli Kozbiber, a relish of red and green peppers in a pomegranate dressing, topped with crushed roasted walnuts; Muhammara, a thick spread of walnuts, red pepper, spices and pomegranate extract; and Kekik Salatasi, a meze of green olives, fresh thyme and olive oil. Antiochia’s main course dishes were simple and elegant. The specialty (and what you find everybody eating here) is the ‘sis’, actually a lamb seekh grilled over a charcoal fire with onions and tomatoes and topped with pomegranate molasses, Nar Eksisi. They also sell the pomegranate molasses in bottles here — definitely worth picking up since this quality is difficult to find elsewhere.

Palatium Cafe is right down the road from the gorgeous Four Seasons hotel with its yellow facade in the Old Town of Sultanahmet. Although it looks a bit cheesy and potentially a tourist trap, the food was pretty good… and very reasonably priced for the premium location. You can sit outdoors or wander down to the Roman ruins. You can also indulge in nargile or a hookah in the evening. 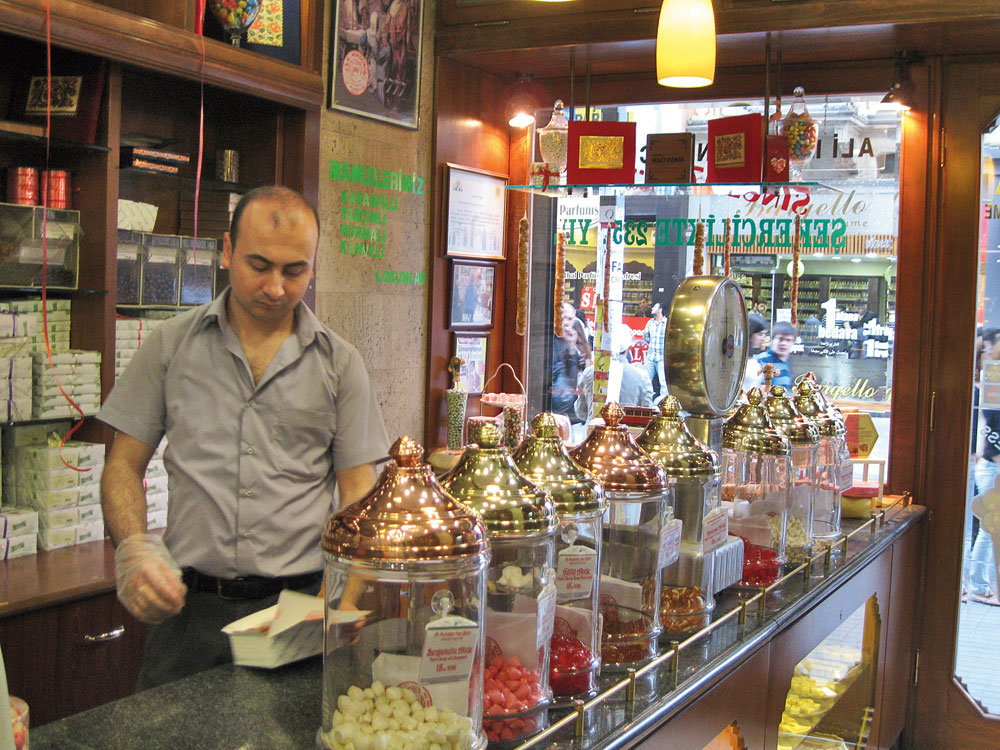 Grand Bazaar may be a tourist trap but it’s an enchanting one with alleys of shops and cafes selling everything from hammam towels to silver coffee cups, gold and textiles. More than the spice market, which can get crowded, noisy and sweaty, the Grand Bazaar is really a lovely way to spend an afternoon. Ignore outdated maps that tell you that the bazaar is divided into neat section. The shops are all a wonderful messy maze today!

If you have time, rather than a whole day tour of the Bosphorus, which can be a bit monotonous, take a boat trip to any of the Princes’ Islands in the Sea of Marmara. Boats run from Kabatas on the European side almost every hour. They do get quite crowded on weekends and Friday evenings, so go early and avoid rush hours. During the Byzantine period, princes and other royalty were exiled on the islands, and later members of the Ottoman Sultan’s family were exiled there too, giving the islands their present name. Later the islands became a popular resort for Istanbul’s wealthy and Victorian-era cottages and houses are still preserved on the largest of the Princes’ Islands.

Today, many people from Istanbul have their weekend and summer homes here, which range from apartments to mansions. No cars are allowed on any of the islands —it’s horse-drawn buggy, foot or bicycle. There are three other islands where you can stop off. I liked Burgazada (stretches about 2km across) which reminded me of the South of France many moons ago — pristine beaches, little local cafes, one family-run restaurant perched on a rock on the edge of the island and apartments to rent in summer. Everyone has their take on this popular tourist destination. This is mine.

Empress Zoe is a historic boutique hotel right in the heart of the old city. Converted from old Turkish houses, the restoration and interiors have been done with great care to preserve and respect local tradition. It has just 25 rooms, all decorated a little bit differently and all very comfortable, with Islamic folk art and Turkish textiles; some with a small private hammam, some suites and a lovely double bedroom with a terrace overlooking the old city. Quite enchanting really! You can sit in the courtyard that has fountains overlooking the ivy-clad ruins of an ancient hammam. The lobby has old walls and barrel-vaulted passages. There’s even a stretch of Byzantine palace wall incorporated into the reception. The only drawback is that there is no lift, only a narrow staircase if you have a room on the upper floors (there are garden room and suites too). But they do tell you this when you book and on the website.

Hotel Splendid Palace is a turn-of-the-century building on the seafront in Buyukada, the largest of the Princes’ Islands. It’s like something out of an Agatha Christie murder mystery. The kind of place old ladies come to in summer “to take the waters” and the sea air. They do full board and have colonial-style rooms and personalised service. In fine weather, you can sit on the terrace and watch the horse-drawn buggies cavalcade by. It reminds me of the Willingdon Club in Bombay. A great escape from the hustle and bustle of Istanbul on an island where the only mode of transport is horse-drawn buggies. 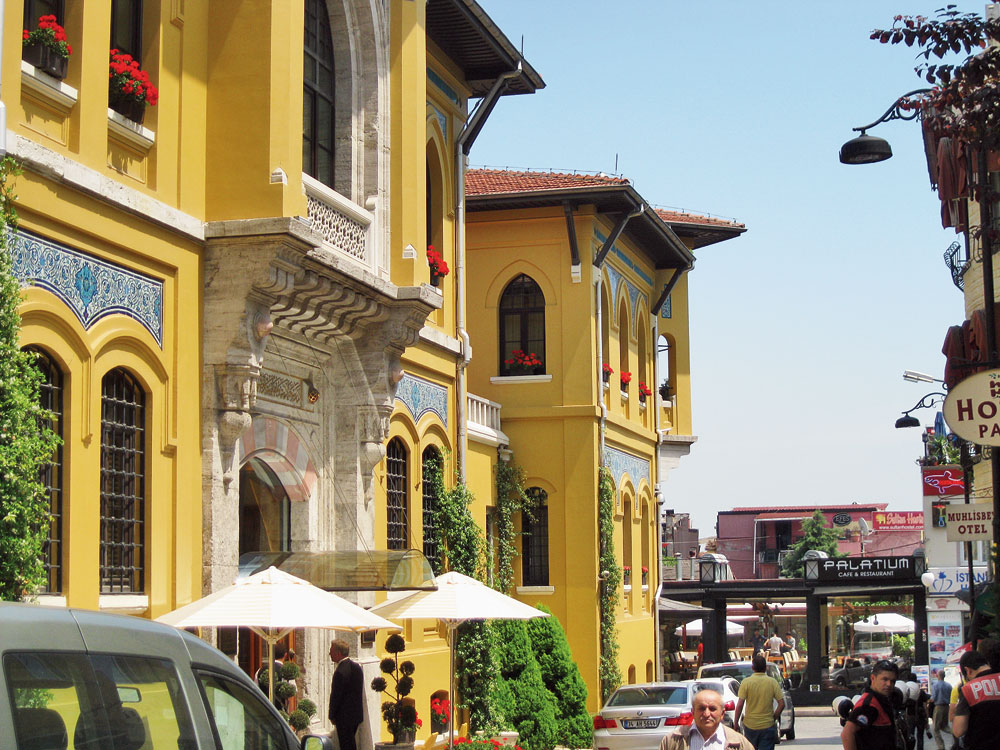 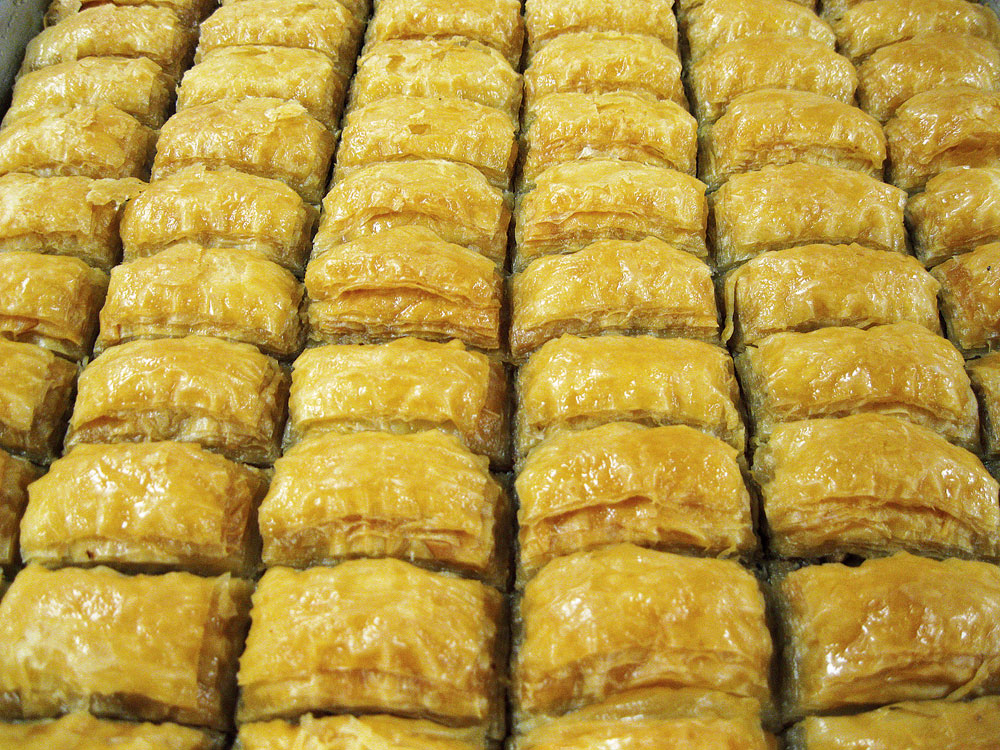 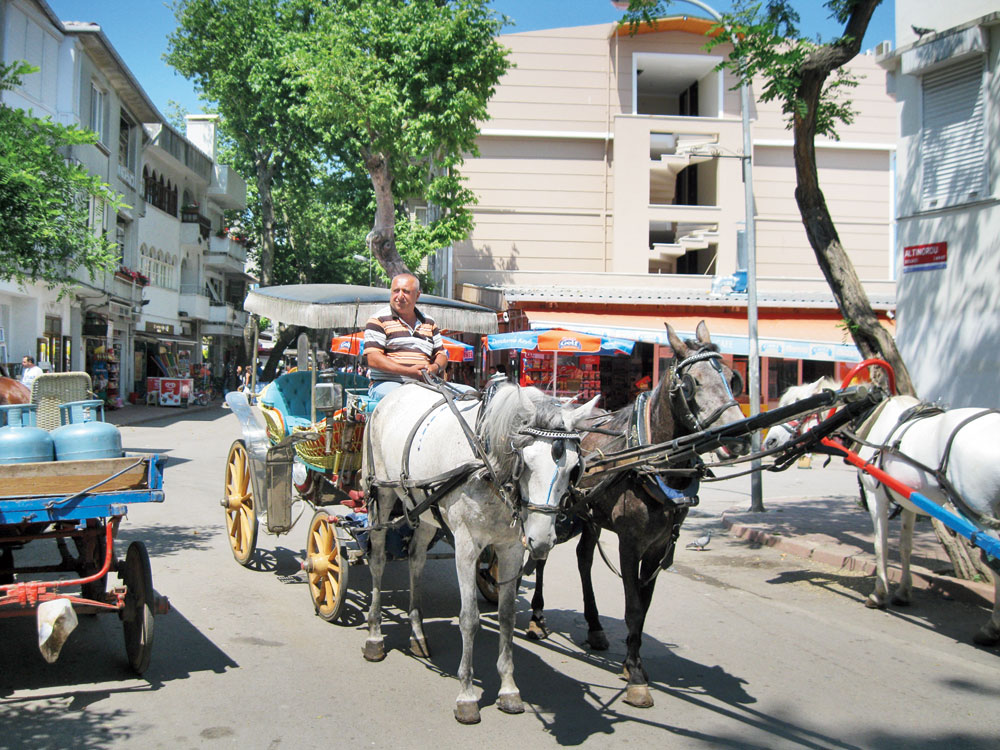 A horse-drawn carriage on Princes’ Islands
Picture by Karen Anand 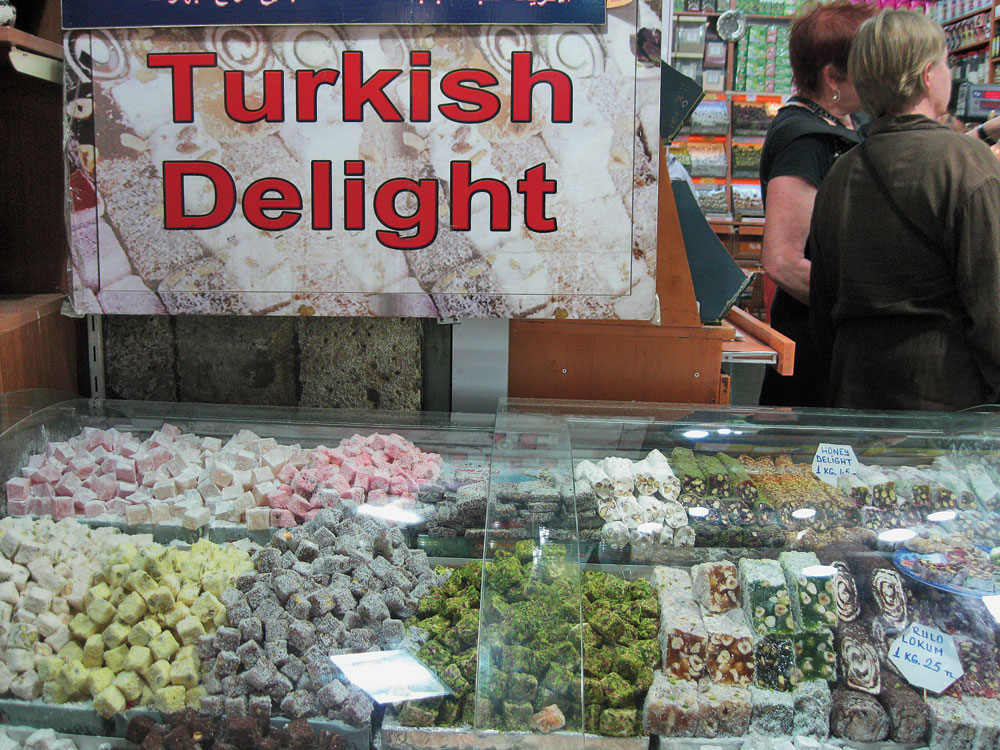 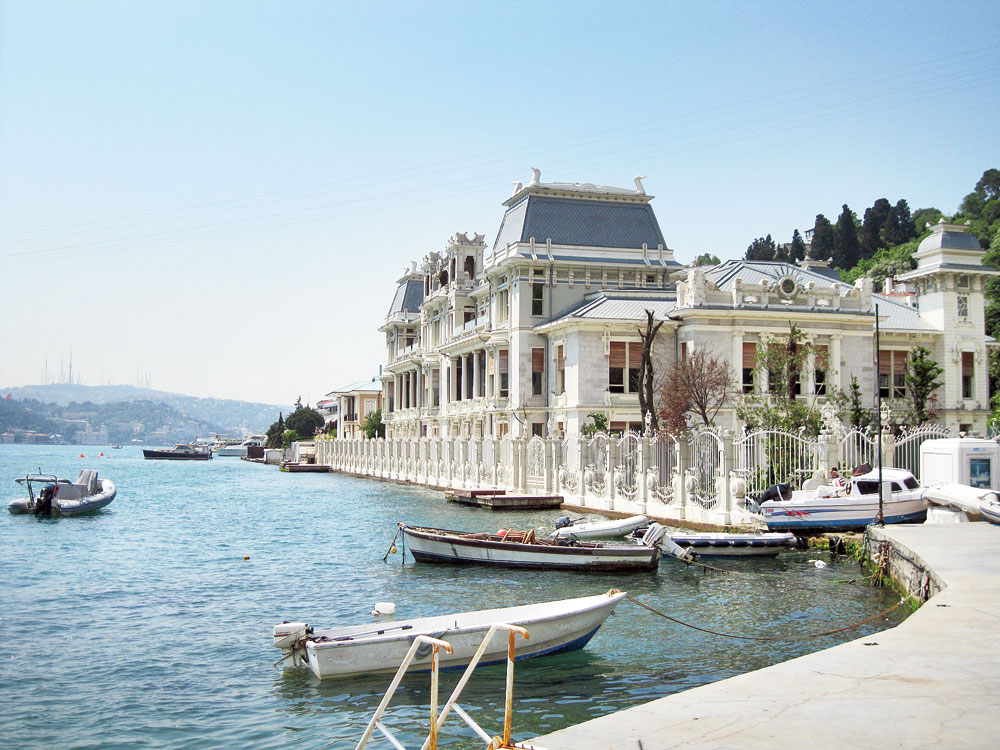 Shop around the corner

I always head to shop for food first and I am not disappointed. Namli Gurme is a gourmet store selling fantastic local products and a small selection of imported ones. Avoid the cold cuts and meats — the Turkish ones seem to contain a fair amount of colour and something which tastes quite artificial. Instead, go for the cheeses — fresh with herbs, the regular very salty Turkish cheese that you find everywhere and a plaited one that tastes a bit like halloumi. Cheese in Turkish is peynir which is quite handy, really! They also have huge block of honeycomb and honey, a large selection of olives, pomegranate, molasses and vinegars, olive oil, nuts (especially those lovely salty, shelled pistachios) and dry fruit. You can pick your choice of meze under the counter and eat there or take away. They will vacuum-pack anything to take abroad.

Next door is Gulluoglu, famous for pistachio and walnut baklava, and spinach, peynir and minced lamb borek. Turkish delight is available in many shops in the Old Town including the spice market. We also found a couple in the seaside town of Ortakoy, but the best is reputed to be Haci Bekir, an old, unassuming small store with a cafe at the back where you can eat and sample. Buy your lokum or helva by the kilo or in pre-packed wooden gift boxes. Double pistachio lokum and chocolate-covered almonds dusted in dry cocoa powder are the must-buys. 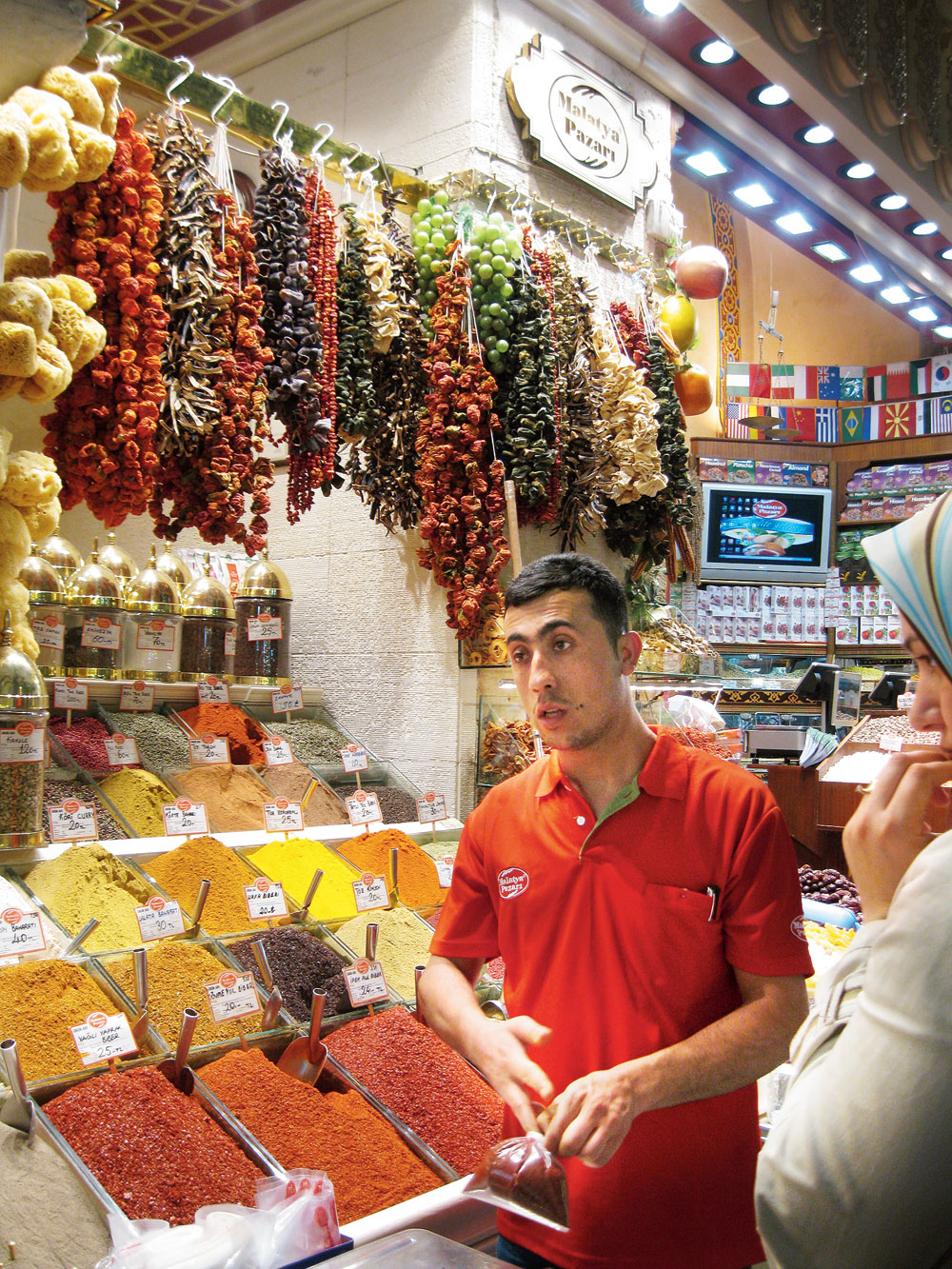