Time stands still in the heart of UAE 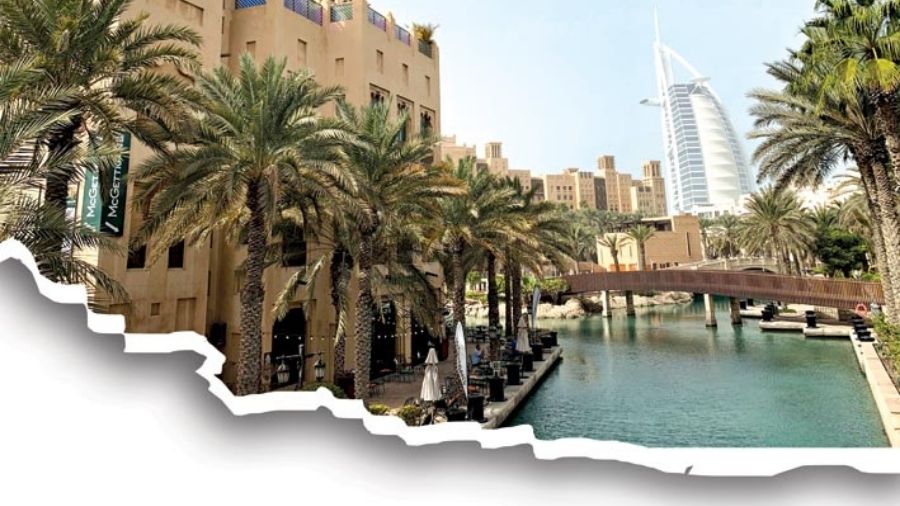 Sitting and idling away your time at Souk Madinat Jumeira, is a beautiful way to spend an afternoon with a few beers.
Shrestha Saha   |   Published 05.02.21, 12:44 AM

Sitting on an abra or the traditional wooden boat used to ferry people across the Dubai Creek from the historic Bur Dubai side to Deira side, I caught a glimpse of the city horizon and felt a strange calmness. It felt like a peek into the future from a place where time stood still. I was on a walking tour with Frying Pan Adventures, stumbling along the souks (markets) of Dubai — spice, textile, gold. The Emiratis and their rich cosmopolitan history ensure their food is the best of different cultures, served into one dish. Munching on an Anda Parotta is different from our roadside bread and omelette because here, it comes with a layer of cream cheese, spicy sauce and Chips Oman, the staple crisps packet that every Emirati kid would swear by. Men bustled along the streets with heavy ware in the souk, pausing for a breath and a cup of Karak Chai from Al Jah S coffee shop, run by a man from Kerala. The scene unfolding around us was drastically different from the Dubai we witnessed on the drive from the airport to our hotel on the beachside of La Mer. And that is exactly how Dubai is — the perfect preservation of the old with striding steps into the future, armed with technology and an undeniable vision.

A traditional abra ferrying locals on the Dubai Creek.

Jumeira Beach Residency with a stellar view of the Dubai Eye.

The lounge overlooking the beach from Rove at La Mer.

The indoor aquarium at The Dubai Mall.

The opulence of Dubai is staggering but it doesn’t let you lose yourself by keeping you rooted with little pleasures that make the 9 to 5 worthwhile. Staying at Rove in La Mer, my room opened up to the sea and the beach, with the gorgeously-lit beachside of La Mer stretching out on my right. A first-of-its-kind mid-market range hotel at the iconic La Mer beach by Emaar and Merass, the 366 room hotel has one belief — hospitality in uniformity, within a budget. All the rooms were identical! Sitting outside in the patio restaurant at The Daily, my five days in Dubai were spent eating breakfast with the sight and sound of waves in front of me. In Dubai for the famous Dubai Shopping Festival with crazy discounts and shows in all parts of the city, I continued to witness two different sides of the city that I perhaps truly reflected at the giant 150m structure that is the Dubai Frame. It is famously said that the architect who built the structure, has said “There is so much beauty in the city, why not frame it?” And thus was born this golden building in the shape of a photo frame that houses a museum inside and view of old and new Dubai on either side. Stained glass with motion sensor on the floor of the building goes transparent on being stepped on, giving you a clear view of the 150-odd metres drop below. It took the Dubai Frame to discover my fear of heights!

The museum inside tells you the history of the Emiratis and one can spot a picture of the first flight that landed in UAE belonging to Air India. The building is divided into past, present and future and the vision of the future is sure to grab you by the lapels and drag you into a state of wonder!

Burj Khalifa stands tall with twinkling lights in the evening.

Dubai spice Souk is a collection of spices from around the world.

A quintessential Anda Parotta from Deira.

Standing ‘At the Top’ literally at The Burj Khalifa, a stray thought occurred to my mind. As I stared at the world below, I realised I had chosen a favourite. The Burj Khalifa might be the tallest building in the world and an architectural marvel, my heart lay at the Dubai Frame. Drinking a cup of coffee, staring at the desert at the distance from the top of The Burj Khalifa, I felt ecstatic and alive and a lot had to do with having watched Mega Structures: Burj Khalifa the night before my visit. There are perhaps four or five spots in Dubai from where you can not see the Burj and I am convinced of finding all of them in my next trip!

While Deira and old Dubai was replete with cultural moments, a walk down the Jumeira Beach Residency is the complete opposite of it. In a tax-free, duty-free land, bright shops shone at us with the best eateries serving up various cuisines with flair. A Syrian perfume seller proposes marriage to me, deducing my singlehood upon learning that I was travelling alone. And a meal at Bombay Bungalow serving up plates of delectable Prawn Malaicurry and Chicken Biriyani follows this glorious walk by the Bluewater, as Dubai Tourism conducts a surreal drone show in the skies. One can see the Dubai Eye in the distance, prepping to open doors to tourists and residents again soon and there is soulful Arabic music in the air. Window shopping at JBR, we looked at the discounts on some favourite brands and made a list in our head of things to buy in Dubai for the next day was reserved solely for shopping at The Dubai Mall.

It is advisable to download The Dubai Mall app before going there because I can promise you three hours of frantic walking around after being lost inside the giant place. During one such frantic walk to get to Zara, I walk past the aquarium where people stand watching fish of all shapes and sizes float around in a majestic setup. Done with my shopping, I realise it’s late evening and I step out of the mall to the water fountains in front of the Burj. Adele’s Skyfall keeps playing as I stand at stare at the marvellous show in front of me. Dubai is a myriad of emotions. A walk down Broadway is a brilliant mix of lights and sense of fancifulness while the mind wanders to the scenes of the old souks in Deira, right across the creek. Dubai has something for everyone.