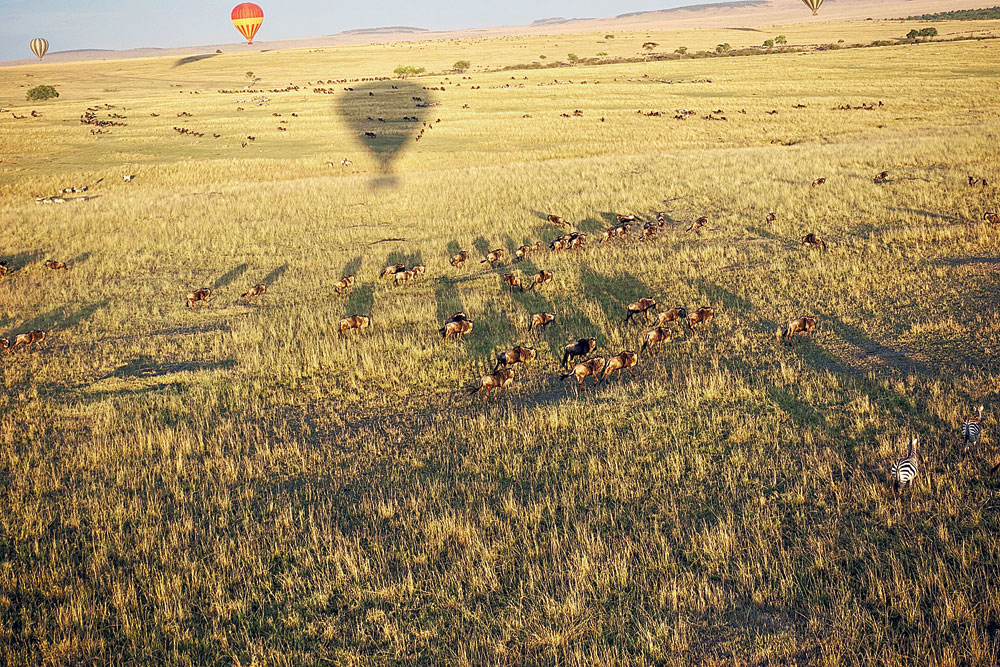 Our hot air balloon swooped down for a closer view of the zebras, gazelles and wildebeests.
Picture: Chandana Ghosh
Chandana Ghosh   |   Published 01.06.19, 11:34 AM

I seated myself for a late lunch on the well-laid table, on the lookout balcony of Asilia’s Rekero camp. This was perhaps one of the best locations in Mara, overlooking the Talek River. In comparison to Mara River, Talek can at best be called a stream. That, however, did not prevent us from watching the migration from the camp deck. Zebras, gazelles and wildebeests leisurely strolled across this shallow riverbed. Fearlessly they even paused to nibble on the green grass alongside the rocky outcrops.

The camp, however, was some distance from the Mara River — and unlike the Serengeti plains, it would not be possible to make multiple trips to the riverside. The plan for the day was to go there and wait. Alternatively, one could also witness the migrating herds from a hot air balloon. Mara was one of the best places for this activity, as it was possible to track the moving beasts right up to the waterfront. My excitement was, however, dampened by the advice of the local voices of experience, who proclaimed it was not a value-for-money option given that there was really no guarantee of catching the migrating herds in action. Over and above, the take-off time of the balloons was scheduled before sunrise and reaching the launch pad in time to complete all formalities would take another hour, perhaps two. This made my decision seemingly more difficult. In spite of this, I decided to take the chance and go for it.

I reconciled to a sleepless night and a hole in my pocket. But that was soon forgotten as our hot air balloon gained height the next morning and the golden rays of the rising sun bathed us with fresh energy. We were happy basking in the pristine morning light and admiring the extensive landscape below us, when the pilot chanced upon a migrating herd. He swooped down for a closer view of the zebras, gazelles and wildebeests. The aerial view was very different from the ground view — I could see the geometric patterns created by the beasts that were on the run. It was like in a choreographed dance sequence. Yes, we were lucky! This was certainly not what the locals had predicted. And this was just the beginning of our hour-long balloon ride. Before we descended at the other end of the river for a champagne breakfast, we had actually spotted the Big Five from our balloon — yes, the lion, rhino, leopard, elephant and the African buffalo.

Nothing had prepared me for this ‘reality show’ — the sound of a million hooves, the fear in their eyes before they crossed, the display of bravery as they jumped over the menacing jaws of the crocodile
Picture: Chandana Ghosh

My gaze was riveted on the helpless bodies trapped in the muddy riverbank. Their struggle for life was brutally ended as the slithery tracts of mud slowly swallowed the wildebeests that were trying to cross the Mara River. Well, not quite! The mud-caked surface along the water edge suddenly sputtered and heaved. The head of a beast nudged up, covered in clay. Kicking desperately to escape the sinking mud, he finally emerged, balancing himself on all fours — a young calf, wet, muddied and dripping. Several safari vehicles had lined up along the Mara River to witness this spectacular river crossing. They broke out in a thunderous applause, cheering the young survivor.

It is that time of the year when millions of wildebeest, along with zebras and gazelles, cross over from the Serengeti plains in Tanzania to Masai Mara in Kenya, in search of greener pastures. The Great Migration is actually a year-round phenomena and the herds complete a full circle — starting with calving in the Ngorongoro crater in January to the Grumeti river crossing along the western corridor around May-June. By the time they reach the Mara River, it is usually end-July-August. At this time, the water level is lower and it is a dramatic sight watching them cross over the flowing waterbody infested with crocodiles — plodding up and down the banks to gauge the depth of water, prodding and jostling one another as they follow the leader of the pack, escaping the many challenges that pose a threat to their lives and finally taking the great leap of faith — as they jump to safety on the other side of the river.

Unfortunately, many lose their lives during this process — apart from crocodiles, drowning and being trapped in the muddy riverbank are common hazards. The weaker ones become easy prey to lions and other predators that quietly lie in wait for them near the riverbanks. Post-October, the herds make their way back to southern Tanzania — crossing the Mara River a second time to enter the grassy plains of Ndutu and Ngorongoro — as they ready themselves for the calving season.

The Serengeti plains are famous for their mobile camping accommodations
Picture: Chandana Ghosh

The balcony of Asilia’s Rekero camp is perhaps one of the best locations in Mara, overlooking the Talek River
Picture: Chandana Ghosh

Land of the wild

If you are a wildlife enthusiast, then Serengeti-Mara plains is the place to visit during your lifetime. And in case you are not, then again this is the place that will convert you into a wildlife enthusiast for life. Migration is like an annual event, however, witnessing the routine yet intriguing lives of the wild animals is a rare privilege. The African grasslands offer a kaleidoscope of experiences — the lion families bringing up their cubs, the predators hunting down their prey, the cheetahs chasing their kills, the hippos sharing the waters with the crocs and the giraffes and elephants displaying their size and height. This inside view into the lives of the beasts is even more fascinating, than just sighting them.

We had countless such experiences but the one that stuck in my mind was an orchestrated river crossing in Masai Mara, on our last day before we took our flight back to Nairobi. Thousands of wildebeests, flanked by a group of zebras and one hippo stoically standing guard by the river bank to keep the hungry crocodiles at bay. Yes, that was a happy ending indeed.

Earlier that day we had been hustled to the riverbank to witness the famous Mara River crossing. Our mobile camp was located not very far from the river. As we rushed out in our safari jeep, we passed hundreds of wildebeest racing towards the riverbank. Fathers, mothers, aunts, uncles, children — they seemed like one large family, spanning across generations, programmed to think in unison and reluctant to be separated from each other. They branched out in different directions to allow our jeep to pass — only to converge again in a single file, with the sole objective of crossing the river.

By the time we reached the riverbank, there were several of them queued up already. Their indecision to cross was apparent as they paced up and down along the riverbank.

Our driver-cum-guide informed us that witnessing the actual river crossing is often a matter of luck, given the indecisive nature of the herds. Sometimes it may take a whole day or two for them to make up their minds and the wait becomes quite excruciating. Much to our disconcertment, he directed us away from the migrating herds to a wooded spot for an open-air breakfast spread.

Just as we had cosied ourselves in the shade, with a hot mug of coffee, muffins, toasts and a variety of condiments, there was a crackle on his walkie-talkie… and it was time, for the crossing! With coffee flying out of our mugs in one hand, and half-eaten toasts in the other, we clambered back into our jeep. Breakfast was soon forgotten as our jeep bumpily sped along unmarked tracks, tossing us in our seats like a salad mix so that we could get there in time.

The Serengeti plains are famous for their mobile camping accommodations. These collapsible camps move with the migrating herds and therefore provide great opportunities for migration viewing. During July to October they are located very close to the Mara River, which makes multiple trips to the riverside possible. Some of the well-known names include Asilia, &Beyond, Nomads and Sayari. Needless to say, this “being very close to nature” experience comes at a hefty price during season time.

I must have witnessed the Migration several times over, in movies, documentary programmes, video clips, just to name a few. I had thought I had seen it all. But nothing had prepared me for this “reality show” — the sound of a million hooves, the fear in their eyes before they crossed, the display of bravery as they jumped over the menacing jaws of the crocodile. At that time it did not matter that I was one of the many spectators, in the line-up of jeeps along the Mara River, watching perhaps one of the greatest spectacles on earth — it was like an Olympic event, of a different kind. The magnified viewing lens of the camera or binoculars would often pick up the details missed by the naked eye, to complete the narrative of the river crossing.

Much in the same way, I spotted the muddied calf that had survived the sinking mud on the riverbank. By the time he emerged, the herd comprising thousands of wildebeests had already crossed over. He was left with the daunting task to cross the raging Mara River… alone. Will he be able to join his family on the other side? Will he be able to survive the predators? We all waited expectantly in our respective jeeps. The young calf gingerly traced his steps back along the slope of the riverbank and decided to take a plunge further downstream. We watched his little body bobbing up and down in the fierce current of the Mara River. As he galloped to safety on the other side, unharmed, the audience broke into raptures that resembled a football stadium, cheering for their home team.

Sixty-five per cent of the Mara River is in Kenya and the balance 35 per cent in Tanzania. However, only a small segment of the same is in the path of the Great Migration. The herds can be viewed crossing the river from both Serengeti and Masai Mara National Reserve. The landscapes and the camping facilities of the two regions are different.

The Serengeti Plains or the Savanna grasslands of Tanzania stretch endlessly, covering more than 30,000sqkm. The Masai Mara National Reserve is only 1,500sqkm. The rivers Mara and Talek run through this grassland that is punctuated with acacia trees. Understandably, the concentration of wildlife is higher in Masai Mara and therefore it attracts a large number of tourists from around the world. The extensive plains of Serengeti, on the other hand, have their own charm and they offer a more luxurious experience in the midst of wilderness.

I chose to follow the migration from Tanzania to Kenya. But crossing over from Serengeti to Mara is far simpler if you are a zebra or a wildebeest. The available connections between these two contiguous parks is much more convoluted for human beings — and there is a lack of accurate information on the same. The border crossing point is Isebania but since each country has its own airfield connection and ground transportation, you end up taking two separate flights (Kogatende to Tarime and then Migori to Ol Kiombo in Mara), and three legs of ground transportation. The flights are more like small chartered planes and the price varies based on the number of passenger bookings, adding to the challenge of crossing over.

However, once you reach your destination in Mara, it is a very different story.