The untrammelled charm of the Amalfi Coast 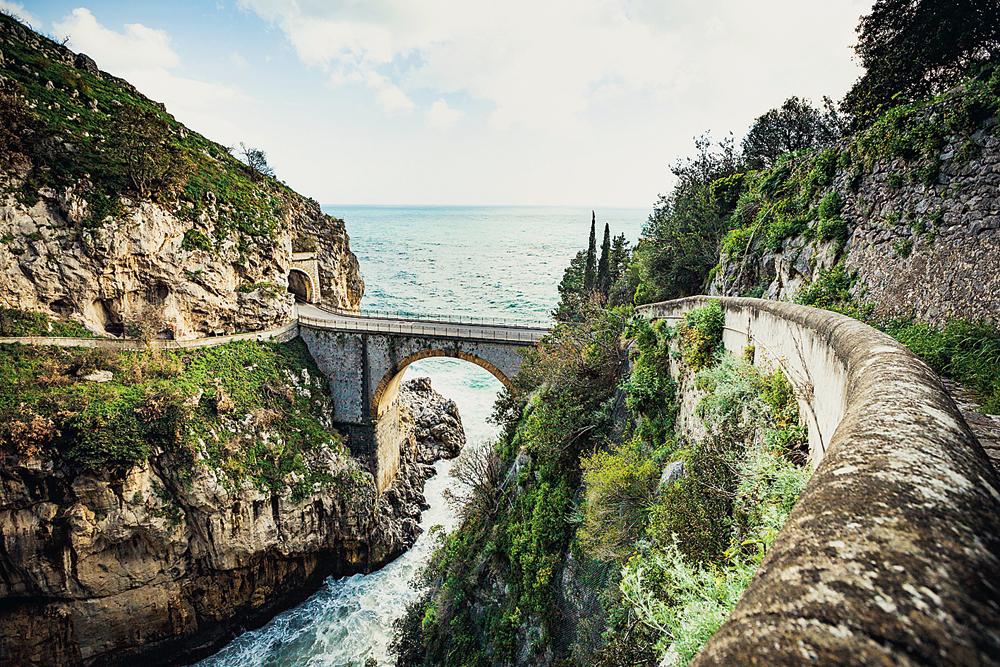 As I sipped strong Italian coffee, the sun played with the clouds against the Neapolitan sky. Breakfast was served on the terrace of our hotel, hemmed in by lemon trees, laden with fruit, which made the experience enjoyable. Now and then a stray sunbeam would light up the huge mosaic dome of the basilica. The sun was in its elements. We had planned a visit to Costiera Amalfitana, arguably the most beautiful coastline of Italy and bad weather wouldn’t do at all. The day before, we had taken an hour’s train ride from misty Roma Termini to Napoli Centrale.

Normally left out of the tourist triangle of Rome, Florence and Venice, Naples is a potpourri of beautiful churches, like Santa Chiara and Cattedrale di San Gennaro, budget shops, designer boutiques and amazing street food and pizzerias. There were buses plying from the main bus station, but having only a day to experience the coast, we had opted for a private tour. A short walk from our hotel to Piazza Garibaldi, our eight-seater picked us up and headed southwards, out of Naples via A3.

With my husband, I was part of a quintet of sorts, led by our guide Marco Bottazzi and driver Pascal. We left the tortuous streets of Naples, many of which are lined by tall buildings. We hit the highway. And soon on our left was Mt Vesuvius in all its majestic splendour. “If it were not shrouded by the clouds, you could have had a ringside view of the volcano that devastated Pompeii in AD 79,” said Marco. He came with the typical Italian zest for la dolce vita and his enthusiasm was infectious.

As our vehicle started ascending Monti Lattari, the Sorrentine Peninsula revealed itself in a mass of rugged cliffs, fringed with parasol pines. The road climbed steadily till we reached the small town of La Vico Equense. Originally built on the site of a seventh century pre-Roman necropolis, the town was popular among Roman patricians. Their lofty villas still stand witness of the glory under which the town once basked.

We continued, the road now descending. Soon our car turned a hairpin bend to reveal our first pit stop, Sorrento, the gateway to Amalfi Coast. Founded by Romans as Surrentum, it is now a postcard of colourful houses encircled by the glittering ocean, 160ft below. It looked like a magical place.

“Sorrento is immortalised by the siren Parthenope,” said Marco. Parthenope and her sisters used to reside at the Li Galli islands near Sorrento. According to legend, Parthenope cast herself into the sea when her songs failed to entice Odysseus. Her body washed ashore at Naples. Marco brought us back to reality by some finger-kissing praises of Orangello, a limited-edition liqueur made from the famous Sorrento oranges. “Along with Limoncello, best savoured ice-cold, try some pistachio liqueur. This is a seasonal speciality of our region,” he added.

After exiting the tongue of land stretching to the sea, we stopped by the wayside and Marco pointed towards a pristine white villa framed by dark green trees. This belonged to another siren, a real one, Sophia Loren! The Coast was certainly a huge draw for celebrities — reclusive or otherwise. Bidding goodbye to sirens, old and new, we headed out on the stretch from Sorrento to Amalfi. The car turned and twisted along the ribbon-like road — hanging between steep cliffs and burnished blue Tyrrhenian sea far, far below.

Giving us no time to recover from the siren song of Sorrento, Positano emerged in a kaleidoscope of ochre, orange and peach houses in about half an hour. John Steinbeck had written: “Positano bites deep.” And it did. Positano’s name is variously attributed to Poseidon.

Presided by blue-and-yellow majolica-tiled Church of Santa Maria Assunta, the posh village is packed with confetti-coloured houses, clinging to the cliffs at impossible angles. Perpendicular steps replaced roads. Cute boutiques and narrow cobbled streets, opening to great views of the sea charmed us. Apart from simple mementoes, you could get a custom-made Roman sandal with pastel straps to roam the Marina Grande beach. Dotted with colourful umbrellas, favoured by the rich and famous, it is a big draw for tourists, making it the most expensive beach in the Amalfi Coast.

We bid Positano farewell and continued on the Strada Statale 163 Amalfitana. The SS 163 seemed custom designed because no two similar cars could pass side by side without one clinging to the edge! Every spine-chilling bend rewarded us with breathtaking views of the sun-kissed sea merging with the brilliant blue horizon.

“We are approaching Furore, which has 10 inhabitants. They, however, have a private beach,” declared Marco. The village is located in a fjord, a large cleft in the mountains, complete with a suspension bridge, which we crossed. The road broadened to reveal Conca dei Marini, or cave by the sea. Here we stopped for lunch at a restaurant located above an art-shop cafe, Allere. Limoncello, colourful pasta, spiced olive oil and other things reminiscent of sun and sea. Feeling like Alice in Amalfiland, I settled for a ceramic landscape of Positano and some hand-painted wine stoppers. A winding, steep stairway, carved out of rock, led to the restaurant. The Calajanara perched on a rocky outcrop gazed into the sea.

Boasting an open-air latticework roof supported by white columns, its brightly-painted tables were laid with crisp white cloth napkins and large wine goblets with promises of the good things in the offing. On one side was a quaint arbour of climbing plants and lovely red torch-like flowers.

Framed by flowers, the Lattari mountains, the green gold coastline and the shimmering blue of the Tyrrhenian looked ethereal, a vision which would have attracted sailors.

The lunch of crisp salad, generously drenched in olive oil, and spaghetti carbonara, was followed by Lacryma Christi (tears of Christ), a rare wine produced by vineyards on the high reaches of the Mount Vesuvius. “This is the true wine of the region,” our guide confirmed. Refreshed, Grotto dello Smeraldo (a undersea cave), called us. Next, it was time to head for the town of Amalfi.

Ravello, the place to visit

Soon, Amalfi emerged on the horizon, looking every bit the image promised on the Internet. Town seems a euphemism for such a glamour hotspot! The selection of white houses with red terracotta roof rising out of cobalt-blue sea has been subject of many a picture postcard. A maritime power in the ninth century, the town’s connection with sailors is strong, which was evident looking at the statue of Flavio Gioia, who is said to have perfected the sailor’s compass.

“I am leaving you to your own devices,” our guide Marco declared, for he also had catching up to do in this delightful town. We headed up the steep road leading to the town. The broad steps on our right took us to Amalfi Cathedral. I was simply lost for words.

However strong my love for churches, blue skies beckoned and we had a lovely time in Amalfi. We headed for Piazza del Duomo, the heart of all the action. A lady invited us into her shop, smiling and talking all the while. Lemon-shaped soaps in a twist of chiffon seemed the most popular memento. What followed was bliss as we watched the colourful piazza while having limoncello gelatos as life rolled by. After some shopping it was time for the 13th century Museum of Paper. The ancient but fully functional paper mill is recommended by Lonely Planet. Soon it was time to leave for the last stop of the day.

Our car negotiated a steep rise of 6.7km to Ravello and stopped at innocuous steps cut into the hillside. We climbed into a narrow alley lined with shops selling delicate lace dresses and doilies and colourful ceramic bric-a-brac. The afternoon sun was high and hardly any people were around as sleep was on their mind. Suddenly the alley opened out into a huge square.

It was the Piazza Vescovado, the main square presided by the Duomo di Ravello, on the left. On the right was the piazza terrace, invitingly laid with tables under umbrella pines. Terracotta boxes of yellow and purple pansies stood amid tables. Further right, beyond the cafes, the piazza dipped away in a steep incline, overlooking a road leading into town and further down, where Amalfi lay in peach-and-white hues.

When you read about a place, which has, over centuries, courted iconic names like Graham Greene to E.M. Forster and John Maynard Keynes to Greta Garbo, a picture unfolds in the mind’s eye. I confess, nothing prepared me for this quiet yet obviously sought-after village on the hilltop.

Beyond the piazza to the left, the cliffs ended in a sheer drop into the blue waters. We posed below orange trees and plucked some. Marco had told us: “You can take all you wish,” and this advice we followed. “We will blame it squarely on Marco if we are caught,” someone said. And I thought what if we were caught? An Italian prison on the coast may not be such a bad option and then we headed for Villa Rufolo, the place to see in Ravello.

The sun-bleached villa, covered in cypress and lime trees, was built by the wealthy Rufolo family and the initial layouts date back to the 13th century. The Rufolos were “merchants wealthy enough to put the most of the wealthy to shame”. The lavish scale of the Moorish-style villa overshadows Ravello. Renaissance writer Boccaccio mentioned the place in his Decameron. And here, D.H. Lawrence worked on Lady Chatterley’s Lover. Also German maestro Richard Wagner found inspiration to complete his opera Parsifal here. In homage, the city hosts annual summer concert series on a specially built stage jutting out into the Mediterranean Sea. The festival has earned Ravello the name “la citta della musica” or the city of music. In the 19th century, Scotsman Francis Neville Reid bought it and effected a lot of changes and beautification.

The view from the terrace, with a lonely parasol pine, magenta azaleas and smooth honey-toned byzantine towers framing the sapphire blue sea, is the signature image of Costiera Amalfitana. Heady with the view, we walked back to Piazza del Vescovado. A few revellers had started gathering at the cafe tables. While wine glasses clinked and conversations started floating across tables, a pleasant sadness enveloped us. The car soon meandered back, via a different route, along the mountains. As we approached Naples I realised the images of the shimmering sea merging with the horizon, the confretti towns would stay with us, more real, more alive than when we were actually there.