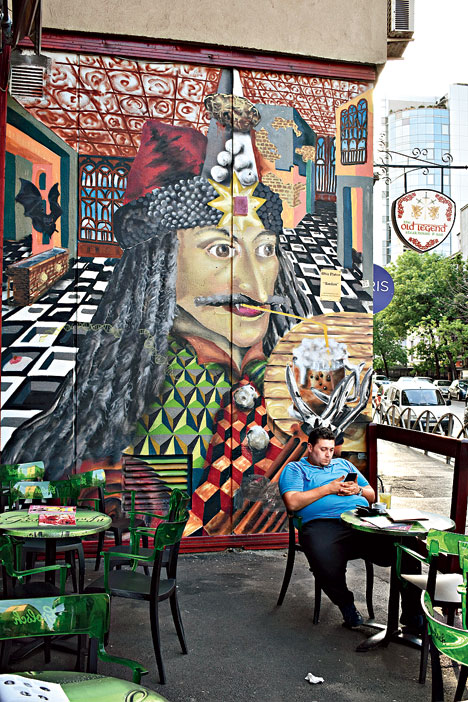 Travelling through Romania is a lot like learning to cook the country’s traditional dish Anghinare Umplute (stuffed artichoke). It brings conflicting questions to the mind regarding the main ingredient: Is it a flower from the East or a vegetable from the West? What are the scrumptious bits and how much must be left untouched?

One of the first things I noticed when I landed in the capital city Bucharest was the size of billboards because advertising is somewhat restricted in the EU. Romania, however, always marched to a different tune composed by Russia. From 1947 to 1989, during the country’s Communist era, Romanians weren’t allowed to travel outside. When people took holidays during the era, they practically lived and ate in their Dacia or Lada cars. This the second thing I noticed — comfort factor regarding one’s vehicle is evident especially with haphazard parking, picnics in cars, incessant honking and intermittent roadblocks.

Vestiges of an Orwellian life during the Communist dictatorial rule of President Nicolae Ceausescu (1974 to when he and wife were executed in 1989) are still visible in Bucharest. The billboard culture, it appears, was introduced by the dictator, who was a great fan of American TV soap Dallas, about a feuding, backstabbing, oil tycoon called J.R. Ewing.

One fine evening in the ’80s, Romanians tuned into an otherwise glib broadcast station to see what the outside world looked like through the characters of Dallas. The series was used as propaganda by the regime to show evils of capitalism and as a master stroke, the dictator paid the lead actor, Larry Hagman, copious amounts of money to shoot a giant portrait which was displayed in the city centre and so, the culture of advertising continues. Today it’s mostly cola being provocatively advertised everywhere and it is widely believed that the TV show, which ran for 11 years, had the exact opposite effect and ended up toppling the dictator, eventually ushering capitalism.

The city itself hems and haws architecturally; there is a lacuna in the conservation efforts regarding old buildings. It is mostly heavy concrete patchwork along the lines of a facade, but leaving out figurines from the original ornamental stucco and plaster frieze, giving it a grandma-in-stilettos kind of feel, still standing but conspicuously.

While visiting Bucharest, the grandeur of a bygone era is often visible from the inside, especially of Eastern orthodox churches and hotels like the Athenee Palace. Ceausescu demolished churches and whole neighbourhoods to make way for standardised residential buildings, which led to the coining of the neologism Ceausima — the demolition of Bucharest. Current-day Bucharest has bits sticking out in glass and steel that will remind you of Gurgaon and other parts that look like Jordan took a winding road to meet Prague in secret because there are hidden pockets of splendour, such as the Atheneum (seat of the Romanian Philharmonic) with massive Corinthian columns which hold up domes that can easily fit like a cloche on a football field. In stark contrast are the grey, paint-chipped Communist-era cement towers, cloning blocks and blocks of the city centre in their dense mass, inhabited by people struggling to make a living.

There is no doubt that life during the Communist era made Romanians resilient, access to utilitarian things, let alone bread, being difficult.

So they handmade objects for daily use and this is best reflected in the crafts markets of Old Town Bucharest, with a redeemed aesthetics for the millennium. Here one finds traditional items such as lead-glazed pottery or wooden artefacts that have been given a modern twist and definitely worth investing in as a tourist.

Bucharest also has one of the world’s poorest neighbourhoods, Ferentari ghetto; home to the Roma gypsy… this is where the Indian connection kicks in. Roma migrated from Sindh and Rajasthan to Europe in the 11th century. They brought with them their music, arts and crafts. Although marginalised and living on the fringes of society, it is easy to spot them with their cheerful disposition, dark hair and embroidered clothes.

Spring is in the air

Romania has a Grecian summer and a Russian winter and if at all there is a good year to visit, then it is now and in the spring. The country is celebrating its centenary year of unification of all the major provinces — Transylvania, Banat, Crisana, Maramures, Bessarabia, and Bukovina — with the old kingdom of Romania. There are a few concerts and art shows planned in an attempt to condense and curate the previous 100 years of a politically tumultuous country. The big reveal, however, will be the People’s Salvation Cathedral, currently under construction at the cost of 250 million Euros and once completed in November 2018, will be the largest Orthodox Church in the world.

The cathedral situated right next to the Palace of the Parliament, the second biggest administrative building in the world. Both are worth a visit while in Bucharest and best accessed through the Cismigiu Garden, a great park to observe local life while eating at one of its many restaurants. Romanian food is palatable to Indian taste buds; there is wide variety to choose from — rice and meat wrapped in grape leaves (Sarmalute), roasted aubergines with tomato and bell peppers (Zacusca) and plenty of breads.

Romania is slowly opening up to tourism but tour operators are quick to warn travellers that conditions are not exactly optimal. “We want to consider ourselves as a European city and we’ve been petitioning the government for a hop-on hop-off tour bus. The government has promised this service for years. As a travel agent; I am obliged to make private reservations for sightseeing, this shoots up the price point although Romania is still one of the cheaper destinations in Eastern Europe

(1 Euro = 4.60 Lei). The government could plan a tourist circuit and offer better services if they are serious about developing the industry, as of now they spend tax payers’ money building churches,” said Mihaela Ionescu, a tour operator.

This general apathy to tourism is visible in the condition of the roads and connectivity to one of Romania’s biggest cultural export, Count Dracula’s castle. There is no direct connection from Bucharest to Bran, where the castle is located. There are train services to the nearest station Brasov, which is about three hours away from the capital and one must change two busses (plying every hour) to reach Bran around 25km away. The other option is to take a taxi to Bran, which costs around 80 Lei. Train tickets to Brasov can be purchased only from the main railway station Gara de Nord, and the train runs every hour from 6am to 8.30pm, costing 94 Lei for a return journey.

The beautiful Carpathian mountain range seals the horizon with its stony snow-filled cliffs enroute from Bucharest to Bran. The backdrop is a perfect lush green valley; the foreground however is derelict with back-to-back abandoned factories. There is a small Saxon village with German barn houses at a town called Cristian in Brasov County, which is unlike anywhere else in the region. As the story goes, Transylvanian Saxons from Germany brought stability to the region in the 12th century when Ottomans attacked Romania and as a result, Hungarian King Louis I gave them autonomy to build Bran Castle in 1377.

The castle only has tangential associations with Vlad the Impaler or Vlad Dracula, who became the ruler of Wallachia in 1436.

Irish writer Bram Stoker, who was researching for his 1897 book Dracula, had zeroed in on the bloody deeds of a Hungarian noblewoman Elizabeth Bathory, who is said to have drained the blood of several virgin girls and bathed in it in the belief that it would maintain her youth. But Stoker, who never visited Romania, became fascinated with Vlad after he found Saxon parchments in the British museum with horrific details of impaling.

The castle’s notoriety, or in this case larger-than-life attributes, truly comes from a work of fiction because in reality Dracula’s Castle appears to have been constructed on a tight budget, with tiny rooms and low ceilings. Inside the castle, there are a couple of rooms dedicated to the fictional part of Bran’s history but the main focus is on its 1920 resident, Queen Marie, primarily remembered for her work as a nurse during World War I. The castle was converted into a museum by the Communist regime and continues to attract thousands of people.

Bucharest is a city in transition, but Transylvania is unchanged and beautiful — the edible heart of the artichoke — and if Bram Stoker had indeed visited the region, looked out from of one the windows in the Castle tower, it may have mesmerised him into writing a different tale.