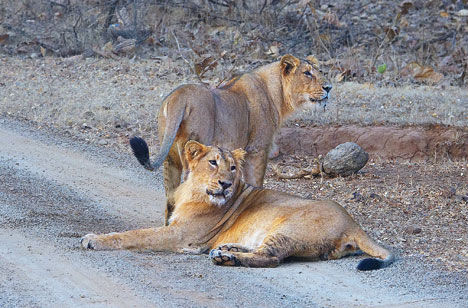 The last safari of the season for me , a wildlife enthusiast, ended with a four-night trip to Gir, Gujarat, in June (most national wildlife parks are closed from July 1 to September 30).

Gir National Park & Wildlife Sanctuary, also known as Sasan Gir, was established in 1965, with a total area of 1,400sq km. Gir is the only natural habitat of the Asiatic lion in India and it has witnessed a four-fold increase in the lion population in the last five decades, from only 50 in the early 20th century to over 475 lions at present.

In the 19th century, the rulers of the Indian princely states used to invite their friends on hunting expeditions. So, by the end of the 19th century, only about a dozen Asiatic lions were left, all of them in the Gir forest, which was a part of the nawab of Junagarh’s private hunting grounds. Today, it is the only area in Asia where Asiatic lions are found, and is considered one of the most important “protected areas” in Asia.

Though lions are the obvious stars of the sanctuary, many other animals prosper in the forests of Gir — 38 species of mammals coexist with the lions, most interesting of which are the leopard, sloth bear, striped hyenas, jungle cats, golden jackals, langurs, Indian porcupine, spotted deer, barking deer, nilgai, chinkara, gazelles and sambar. Apart from mammals, 37 species of reptiles inhabit the area, including the king cobra, Indian rock python and marsh crocodiles.

One of the lesser-known facts about Gir is that the region is a favourite destination for ornithologists. More than 300 avian species are spotted here (most of which are residents), including crested serpent eagles, vultures, paradise flycatchers, honey buzzards, Bonelli’s eagles and pelicans.

In the six safaris we took in the scorching heat of Gir, we were extremely lucky to sight lions in all the safaris. Having visited Masai Mara several times, I had always felt guilty about not visiting Gir — a forest in my own country and it can be rightly said that I earned my redemption on this trip. The highlight of the last safari, however, was a leopard stalking a prey for more than 20 minutes, though we were not lucky enough to witness the predator at prey, as we had to adhere to our time limit for the evening safari.

The forest is divided into eight entry zones for wildlife enthusiasts in the core area; the most sought-after is the No. 2 zone, which is presently home to three prides of lions.

A very interesting fact about the park is that the animals share their territory with the Maldhari tribe, a pastoral community of nomadic herdsmen. They breed and herd their livestock in the park, with the cow and buffalo forming an important part of the lions’ diet.

The Siddis, another tribe that resides on the fringes of the Gir National Park, are a community with African origins. Interacting with the Siddis gave me a feeling that I have only felt at Masai Mara. I also visited the veterinary hospital, Sasan Rescue Centre, which is close to the entry gate of the national park and it has perhaps one of the best veterinary infrastructure in our country.

For those not so lucky to sight the King of the Jungle at Gir, a lion safari in the Gir Interpretation Zone or the Devalia Safari Park has been created, which is a fenced-off area from the buffer zone of the forest. It guarantees a lion and a leopard sighting.

Resident of Gir National Park: The Asiatic lion (panthera leo persica)
Average life span: 14 to18 years
Weight: 300 to 500 pounds
Hunting: Female lions are the pride’s primary hunters
Connectivity: Sasan Gir or Gir National Park is well-connected by road from the Ahmedabad airport (a six-hour drive) and the Diu airport (a one-and-a-half-hour drive). Junagadh, 70km away, is the nearest railway station

The writer is a communication consultant and restaurateur. His passion for wildlife photography takes him to the remotest of jungles