Advertisement
Home / Culture / Travel / Sydney: A thriving coalescence of the old and the new

Sydney: A thriving coalescence of the old and the new

The Telegraph discovers the reality while exploring the rich culture, roots and traditions of the New South Wales capital 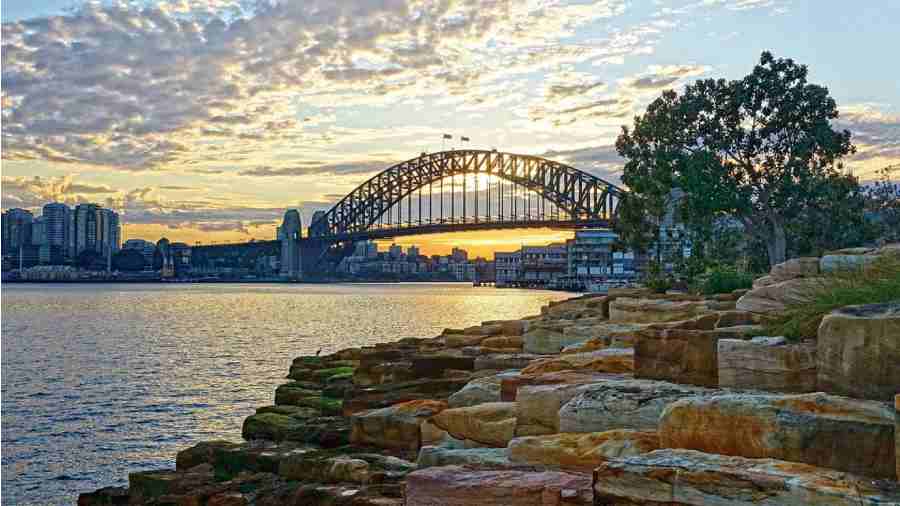 I don’t sleep well on the ground. So there is very little chance of me sleeping well, if at all, in the air. I once went through a 15-hour non-stop flight between New York and Mumbai without sleeping a wink. But this time, things were different. I slept for five out of the eight hours on my flight from Singapore to Sydney, even in the middle of some pretty bad turbulence. Reason? The super comfy flat beds in the Singapore Airlines business class are a dream. Just push your seat back to make it a completely horizontal bed and catch more than 40 winks!

Which, of course, left me fresh enough to hop off my flight in Sydney and start taking in the city and what it offers. Courtesy Tourism Australia, I had signed up for a week-long feel of the rich culture, roots and traditions of Sydney, a tour that probably many tourists — ticking off a must-do, must-see, must-eat checklist — in the New South Wales city wouldn’t opt for. I wasn’t disappointed. Not in the least. For Sydney has so much more to offer than just a view of the Harbour Bridge or a day out at Bondi Beach.

Back to the roots

Any attempt at understanding the culture of Sydney — and of Australia as a whole — is incomplete without travelling back, way back, in time to know about the country’s Aboriginal roots. Modern-day Sydney stands on the traditional Gadi land of Eora Nation, whose original inhabitants include the Gadigal people, among other ethnic groups. My first stop on the first of my two Aboriginal tours in Sydney took me to The Rocks where European settlers first stepped ashore in the late 18th-century, but which is now described as ‘a neighbourhood of historic laneways in the shadow of Sydney Harbour Bridge’.

A 90-minute tour with the affable Lindsay Williams — who looked less like a guide and more like Carlos Santana, right down to the fedora — gave me quite a bit of history of the very land I was walking on, even as Williams often stopped to pluck out stems of plants, like lomandra, a native Australian grass, or a batch of some lemon myrtle, asking me to either taste it or smell it. He spoke of his own nativity with a lot of pride (and rightly so) and about totems being assigned — based on gender, family, season, animals, plants and tribes — to an individual born to a clan, which becomes emblematic of their history.

I learn that the site of the Sydney Opera House, which I can see right in front of me as I walk along with Williams, was once a tram shed, and Williams keeps pointing out both art and architecture which have their roots embedded far back in Australia’s history.

At the end of the tour, Williams fishes out two kinds of boomerangs from his bag. One is the heavier hunting boomerang and the other — the one we are more familiar with with its curved head — that was used to frighten birds. It’s a lot of information to take in, and to be honest, I would often stop to just stare at the magnificent Harbour Bridge and miss out on parts of what Williams was saying. But this was one intriguing tour, whetting my appetite for the next one.

Boomerangs are a significant emblem of Aboriginal culture

One of the many interestingly painted walls at Chippendale

The site of my next Aboriginal tour, a day later, is almost in the same neighbourhood, but one which is more picturesque. For it really can’t get better than pristine white fairy wrens flying low over magnificently blue water. I am at the Barangaroo Reserve, Sydney’s newest Harbour foreshore park, where one of the city’s oldest industrial sites has been transformed into a spectacular, six-hectare headland open space.

Cyclists and joggers whiz past as I embark on my tour with my guide Sophie Campbell. She tells me that the land’s spirit was a Cammeraygal matriarch named Barangaroo, who at the time of early colonial settlement, was a key figure in local Aboriginal culture and community, and remains so even today. Campbell has a vast knowledge of Barangaroo and her bravery, and she regales me with stories, even as she pushes in some tough truths every now and then, like how the entry of the British changed the face of the land and its people. It is widely believed that Australia lost nearly 80 per cent of its Aboriginal population during colonisation.

Barangaroo Reserve is home to scores of native medicinal plants and holds a history rich enough to house a mini museum. I glance cursorily at the exhibits in the museum for I know that Sophie has more interesting things stashed in her bag outside. Like a leather-and-fur skirt harking back centuries, bowls and ladles which formed the lifeline of the natives and, of course, the ubiquitous boomerang.

‘In Just a Blink of an Eye’ is a jaw-dropping performance piece — featuring a real woman (yes, true story!)

Mini street libraries are a common sight at Chippendale

What I loved about my week in Sydney was that no two days were the same. One afternoon, I found myself in Chippendale, a neighbourhood known for its converted warehouses and cutting-edge creative scene. Contemporary galleries cluster around Abercrombie Street, while Kensington Street has cool cafes and hawker-style Asian eateries. The programme at the Seymour Centre encompasses experimental dance, stand-up comedy and Shakespeare. There is an art gallery at almost every corner of Chippendale, free libraries dot the streets and the facade of almost every house has an artistic story to tell.

But Chippendale was once a grimy industrial neighbourhood notorious for crime, from drug dealing to murder. Over the decades, the neighbourhood has turned itself around and become a hub of not only art and culture, but also inclusivity. My guide for the day is the rather hip-looking Gareth Ernst, an artist who has made Chippendale his home since the 1990s. Gareth’s loft is a piece of art itself, with a colossal painting of people — a happy splash of colours — in celebratory mode dominating an entire wall.

He regales me with stories about Chippendale and its changing socio-political landscape as we walk into a host of galleries. One has an interactive Super Mario-styled game spanning across two gigantic walls; another houses Xu Zhen’s ‘Hello’ — a large-scale kinetic sculpture that uses robotics to interact with viewers and whose form is that of a coiled snake, inspired by an ancient Greek Corinthian column.

But what really made my jaw drop was Xu Zhen’s marquee work. ‘In Just a Blink of an Eye’ is a performance piece where a girl clad in baggy street clothes leans back defying gravity as though frozen in time. The girl, who obviously leans on an armature hidden by her clothes, is real (surprise, surprise!) and that’s how she remains for a large part of the day. I stood there for at least 15 minutes, waiting for her to move, but apart from blinking her eyes, she was a picture of perfect stillness. The ‘exhibit’ instantly reminded me of Keanu Reeves’ Neo in Matrix leaning impossibly backwards without losing his footing in order to avoid Agent Smith’s gunfire. And yes, just looking at her gave me a backache!

How can one visit Sydney and not spend a day at Bondi Beach? Thanks to my stay at the spanking new Crown Towers Sydney, I found myself waking up to a view of the Opera House and the Harbour Bridge every morning, but Bondi definitely had to be on the list. A picturesque car ride took me to Bondi, a beach town crawling with happy families and hot bods, in equal numbers. The gorgeousness of the frothy waves was accentuated by the sight (for sore female eyes) of surfers sporting taut abs rising from the water. At one point there were so many surfers around that I half expected David Hasselhoff (or Pamela Anderson, depending on what your orientation is) to start running towards me in slo mo. But well, my gratification for the day was shopping at some cutesy boutiques in Bondi town and a delish Italian dinner. No, no surfers were in sight then.

My attempt at making a bowl

My time in Sydney also involved an introductory pottery course. I am not someone who gets terribly drawn to activities of this sort, but for some reason, I was instantly excited as I walked into Clay Sydney on a bright, sunny morning. Brimming with artistic energy, Clay Sydney is a happy space. Stacks of clay putty are on one side, half-finished bowls on the other and right in front of me, rows of pottery wheels. After a 10-minute demo, I slid on to a stool and rubbed some muddy clay between my palms. My brief for the morning? To fashion a bowl out of the gooey mess in front of me. I had no idea how to do it, but I plunged right into it and after 30 minutes, what I had in my mind was a slightly crooked bowl... but a bowl it surely was. Not only was I semi-proud of my ‘achievement’ but I also realised how therapeutic the session had been for someone like me who is rather low on patience. I made a mental note of signing up for a course when back in Calcutta. I haven’t yet, but I will (hopefully).

Pictures by the author and courtesy Tourism Australia