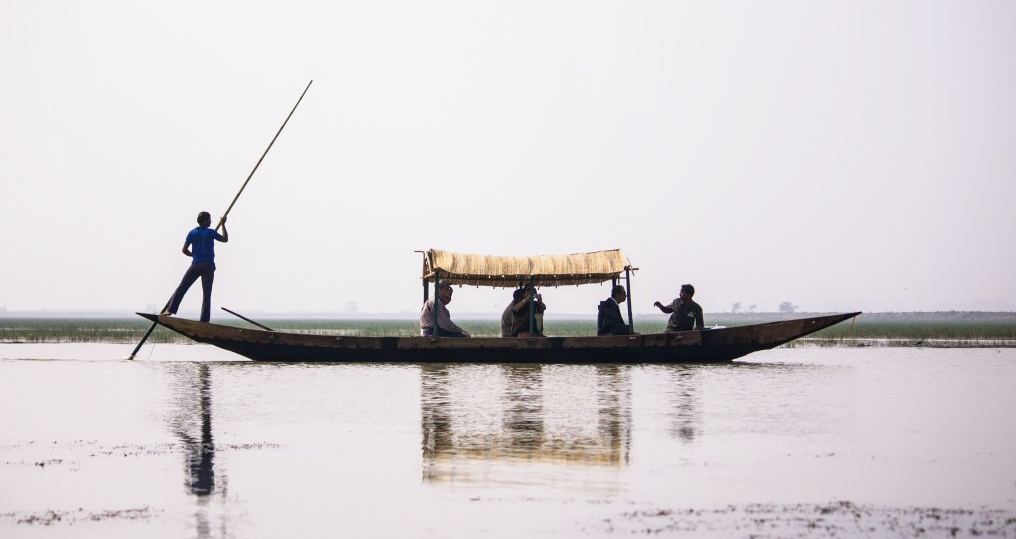 If by any stretch of imagination you think you are a birder or love shooting wildlife with a camera, then Mangalajodi is one place that you surely must visit in winter to see large numbers of migratory birds that head here during winter and other seasons as well.

This little village lies on the northern edge of Chilika Lake in Odisha, barely 70km southwest of Bhubaneswar. Surrounding it are vast stretches of marshlands that are home to a wide variety of resident birds and migratory ones as well. Also, since this is largely marshy land, it attracts mostly water birds.

While in winter the place becomes the resting place for visitors from northern climes, during the rains it gets migrants like the Jacobin cuckoo, the pied cuckoo and the baya weaver that generally arrive in India from Africa and other parts of Asia a little before the monsoons.

Chilika Lake with its water spread of around 1,000sqkm, is a wetland of international importance. It is home to 228 bird species, 139 of them being wetland birds.

This place is a heaven for bird lovers — whether you just love watching them or photographing them — and an unforgettable experience.

How to reach: Mangalajodi is approximately 68km from Bhubaneswar almost entirely along NH16. The nearest bus stand is Chandpur Tangi while those arriving by train will have to disembark at Mukateswar or Khurda Road and take a cab, which will charge about Rs 1,500 for the trip.

Where to stay: The main options at Mangalajodi are Godwit Eco Cottage and Mangalajodi Eco Tourism Centre (associated with the Odisha Ecotourism department). Both can be booked online and over phone.

What to do: The reason for visiting Mangalajodi are the birds and the way to see them is from a boat in the wetlands. The jetties from where they leave is about 3km from the places to stay — walk or take an auto rickshaw. A couple of kilometres down the road you’ll start sighting the birds. There are two jetties. One operated by Mahabir Pakshi Sanrakshan Samity and the other by Madhu Behra. A four-hour trip costs Rs1,200 per boat of four persons. This includes a guide and binoculars with a guide book for different species of birds that can be spotted here. One should take two trips — the sunrise trip starting at 6.30am and the trip that starts four hours before sunset. 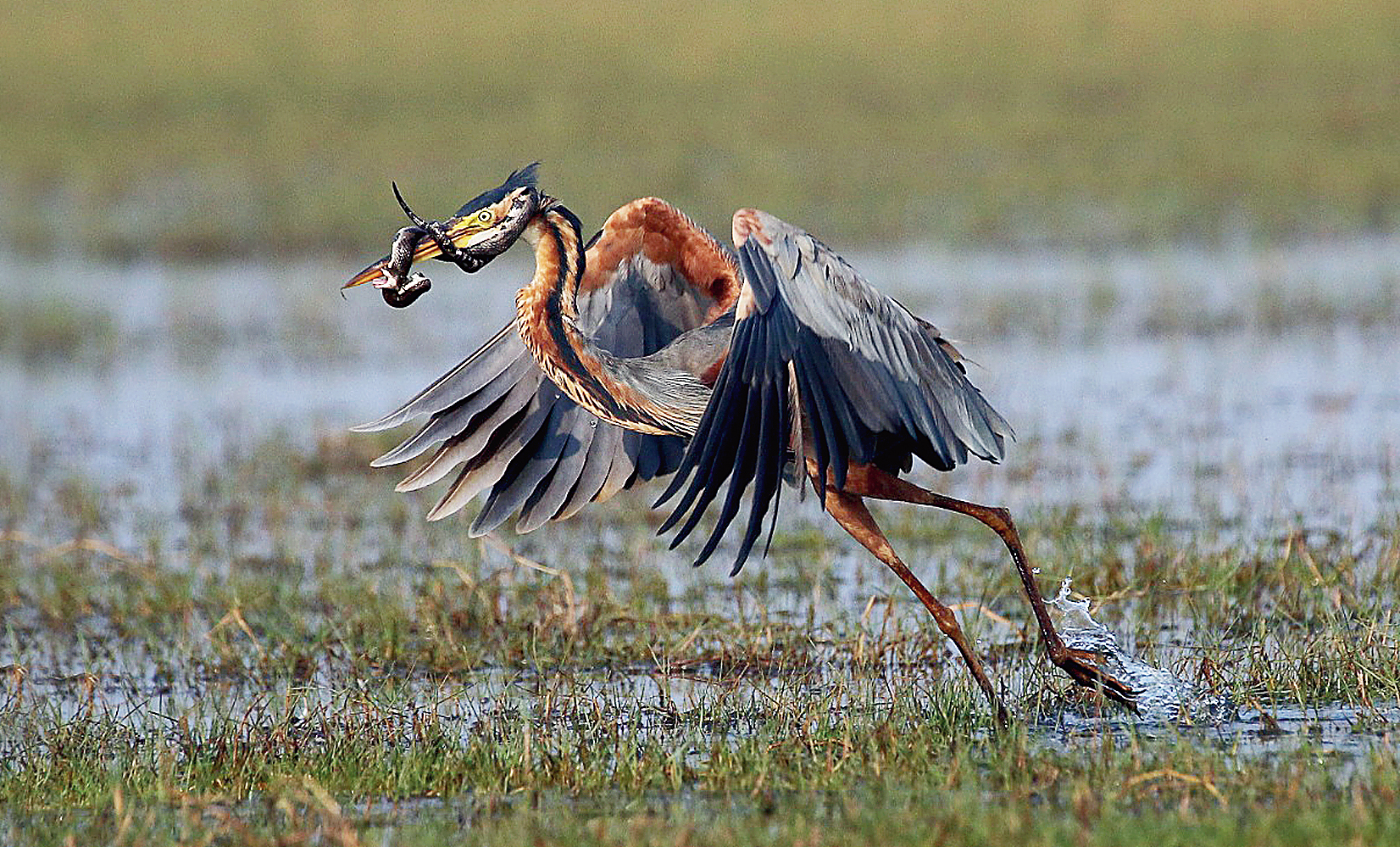 This was a great moment for us. We were travelling through marshy land when I suddenly saw the fight between a purple heron and a snake that had wound itself around the bird’s neck, head and beak. We were about 40m away from the spot where the tussle was happening. The heron is a fairly big bird and it eats fish, insect, frogs and snakes. Ultimately, we succeeded in getting close enough to photograph the duel. The purple heron is widely distributed and while there are migratory varieties in the West, the Indian variety is mostly resident, living in marshy land and in reed beds. Its nesting period is April to June. The purple heron usually breeds in colonies but sometimes the nests are solitary. It could even associate with other species of herons. 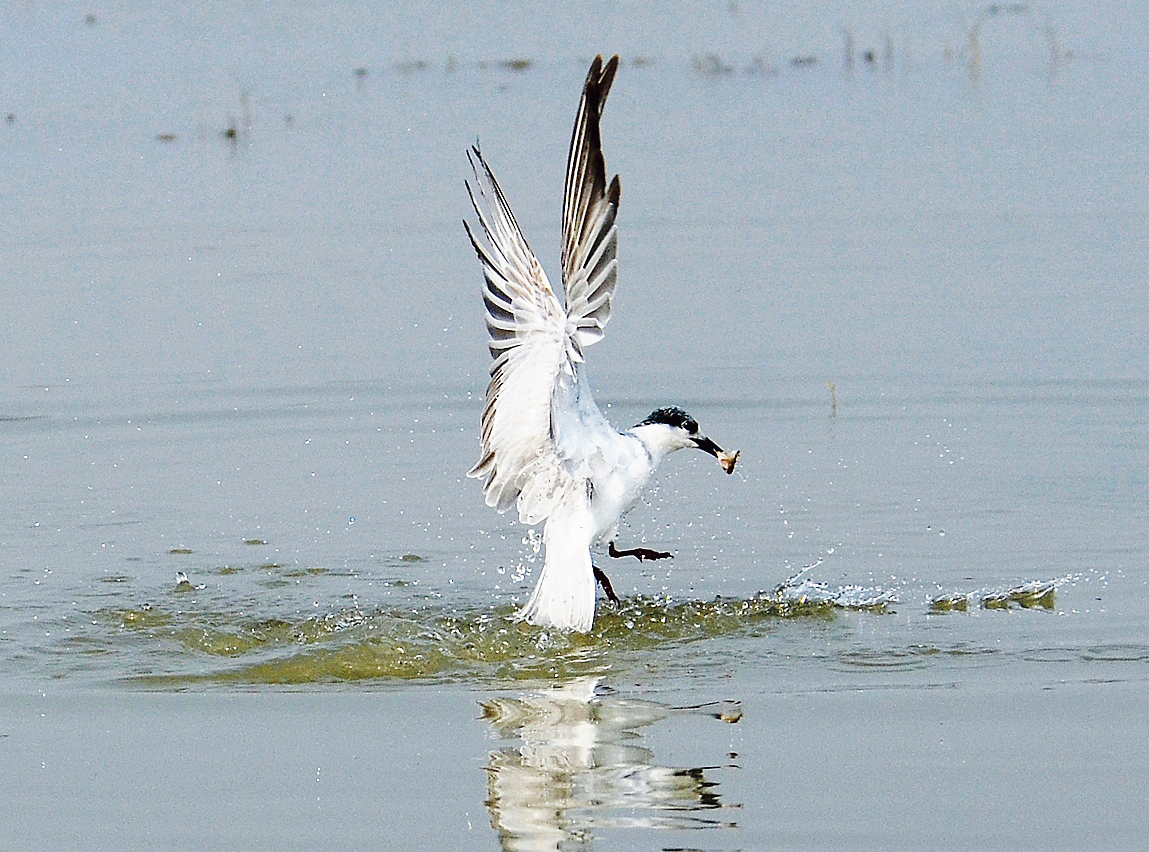 The common tern is a seabird that migrates from the sub-Arctic latitudes to the tropical and subtropical coastal regions in winter. Quite a few of them come to Mangalajodi in winters. Plunge-divers for food, this one here had managed to snag a prey and was pulling it out of the water when we spotted it. It eats mainly small marine fish, but will also eat aquatic insects and crustaceans. 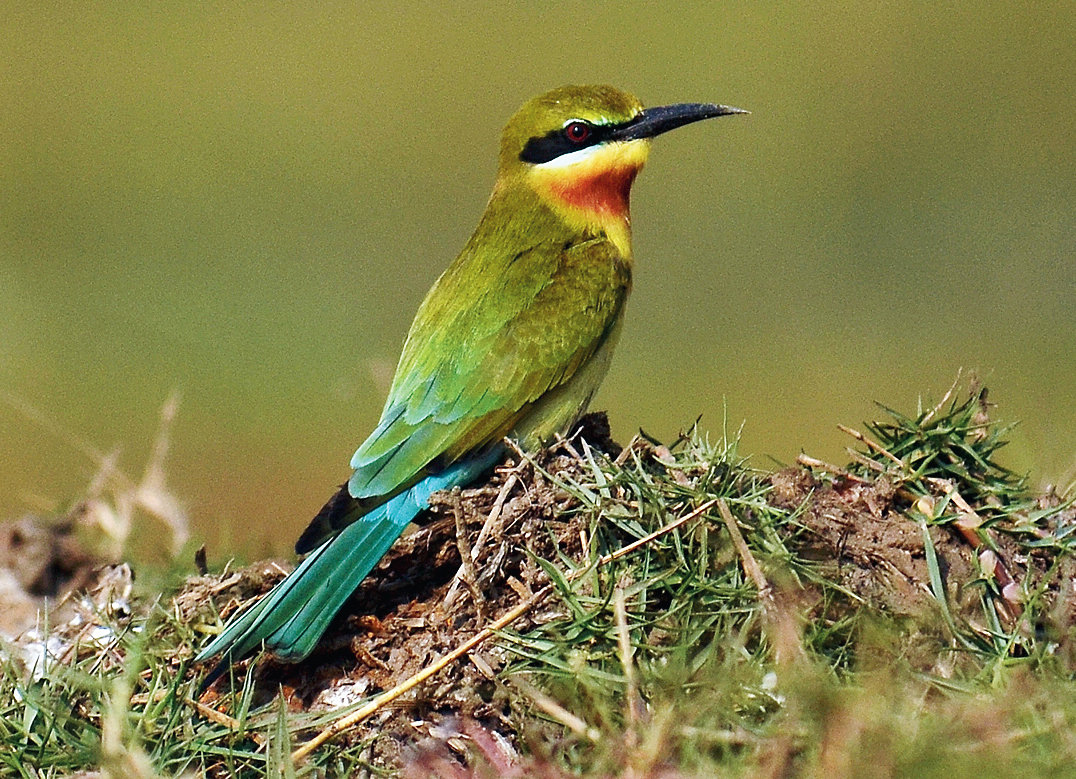 We were in a boat on the lake around 3.30pm when we spotted this rainbow bee-eater trying to catch its prey — mostly bees and wasps. It makes sorties to hunt in the air and that’s quite a sight. Its vibrant colours looked really stunning in the afternoon sun. It is a migratory bird but found mainly in South East Asia. Its nesting time is March to June and it nests in colonies in tunnels often dug into riverbanks. This bird lays four to seven glossy white eggs at a time. 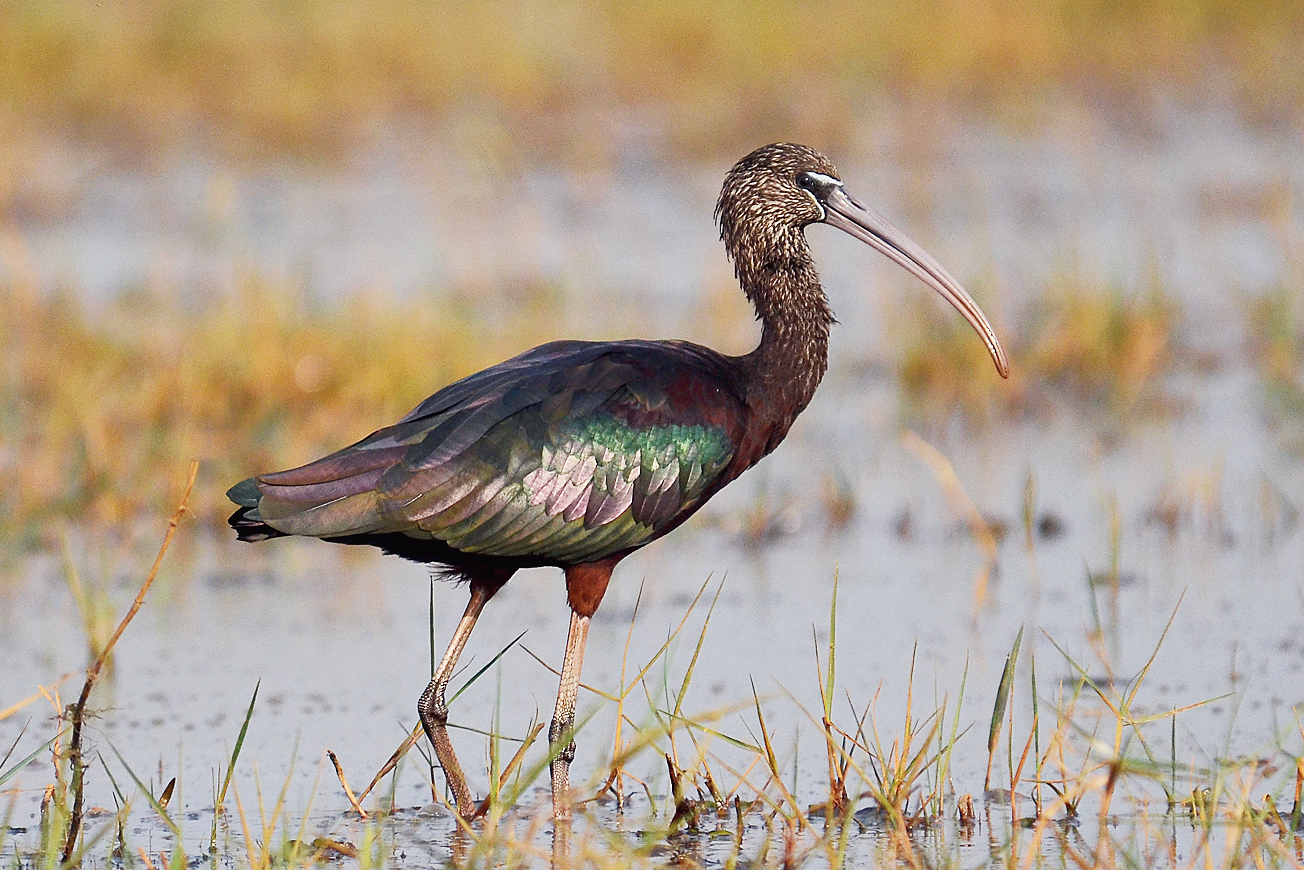 Another beautiful bird is Glossy Ibis. The adult is dark copper/brown in colour with shiny dark green wings. It is found in lakes, marshes and swamps. It is migratory and spends the winter months in Africa and Asia, building nests in low trees.

This is one of my favourite birds. It’s a migratory species and comes to India in winter from the temperate latitudes of Europe and Asia, where it breeds. It even migrates as far as Australia and New Zealand and has the longest-known non-stop flight of any bird. It migrates in flocks and stays near water. It is quite common in Mangalajodi in winter since some of its migration regions include coastal East Asia. In summer it eats insects as well as seeds and berries. In the winter and during migration, it wades in the water, probing in the mud with its long, thin bill for snails. 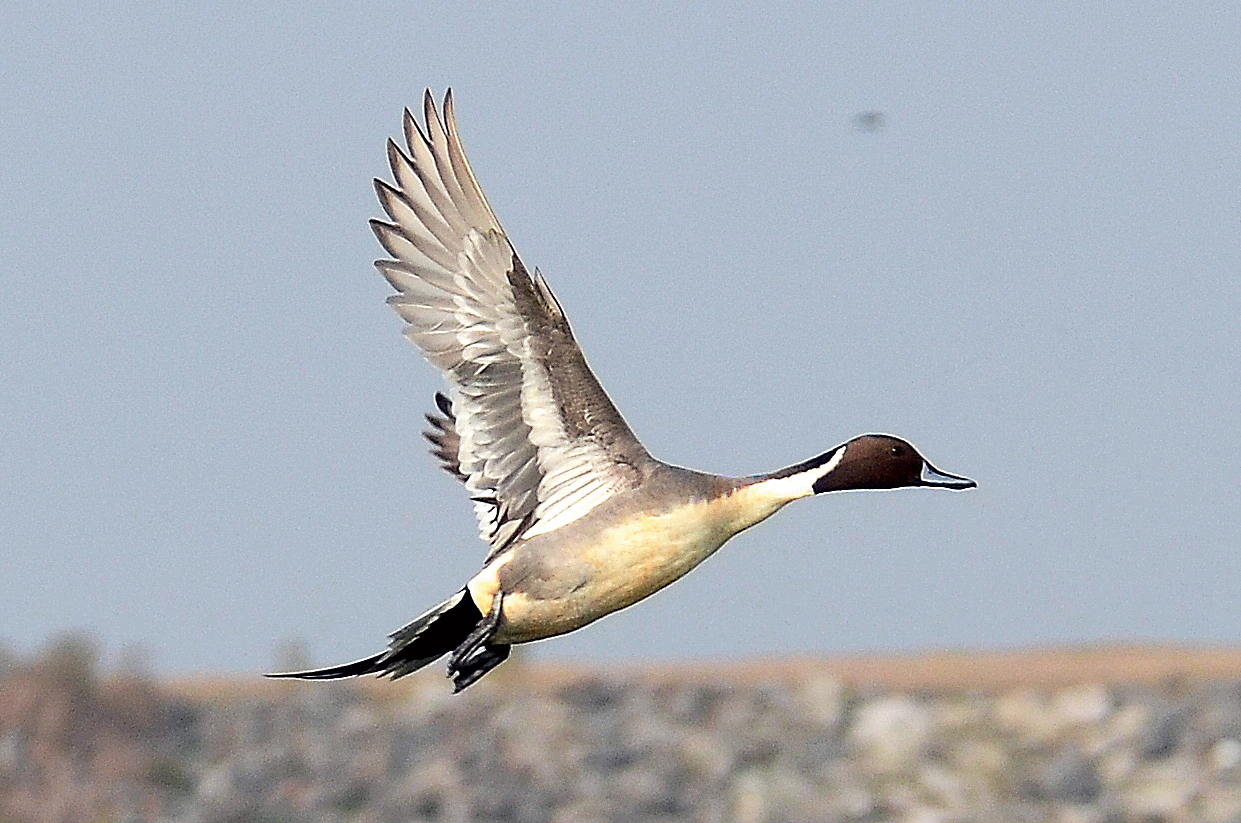 The pintail is a duck with wide geographic distribution that breeds in the northern areas of Europe, Asia and North America. In winters it migrates south up to the equator. This male had just taken off when we captured it on camera. The tail is long and pointed, but it is much longer and more prominent on breeding males. The pintail duck feeds on aquatic plants, seeds, grasses and pond weeds during the evening and at night. It is also known to eat frogs, insects and small fish. Its nesting period is April to June and preferred habitat is grasslands or wetlands. 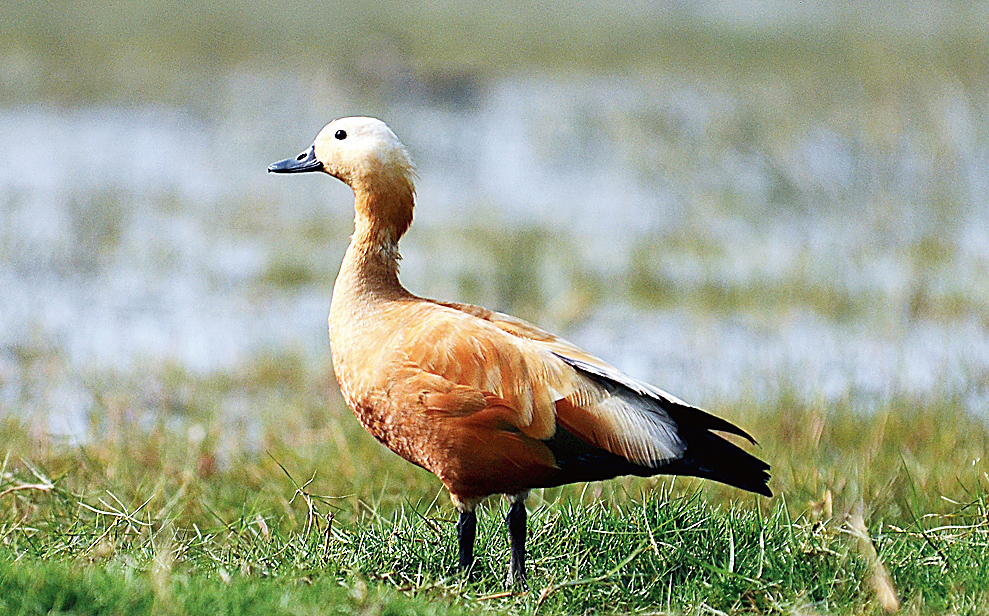 Another visitor was the migratory ruddy shelduck. This bird was wintering in India and had arrived from its breeding grounds in southeast Europe and central Asia. It has a loud honking call. The ruddy shelduck mostly inhabits inland water bodies such as lakes, reservoirs and rivers. In India it is known as the Brahminy duck. In Tibet and Mongolia, ruddy shelduck is considered sacred by the Buddhists. It eats plants, grain and water plants. 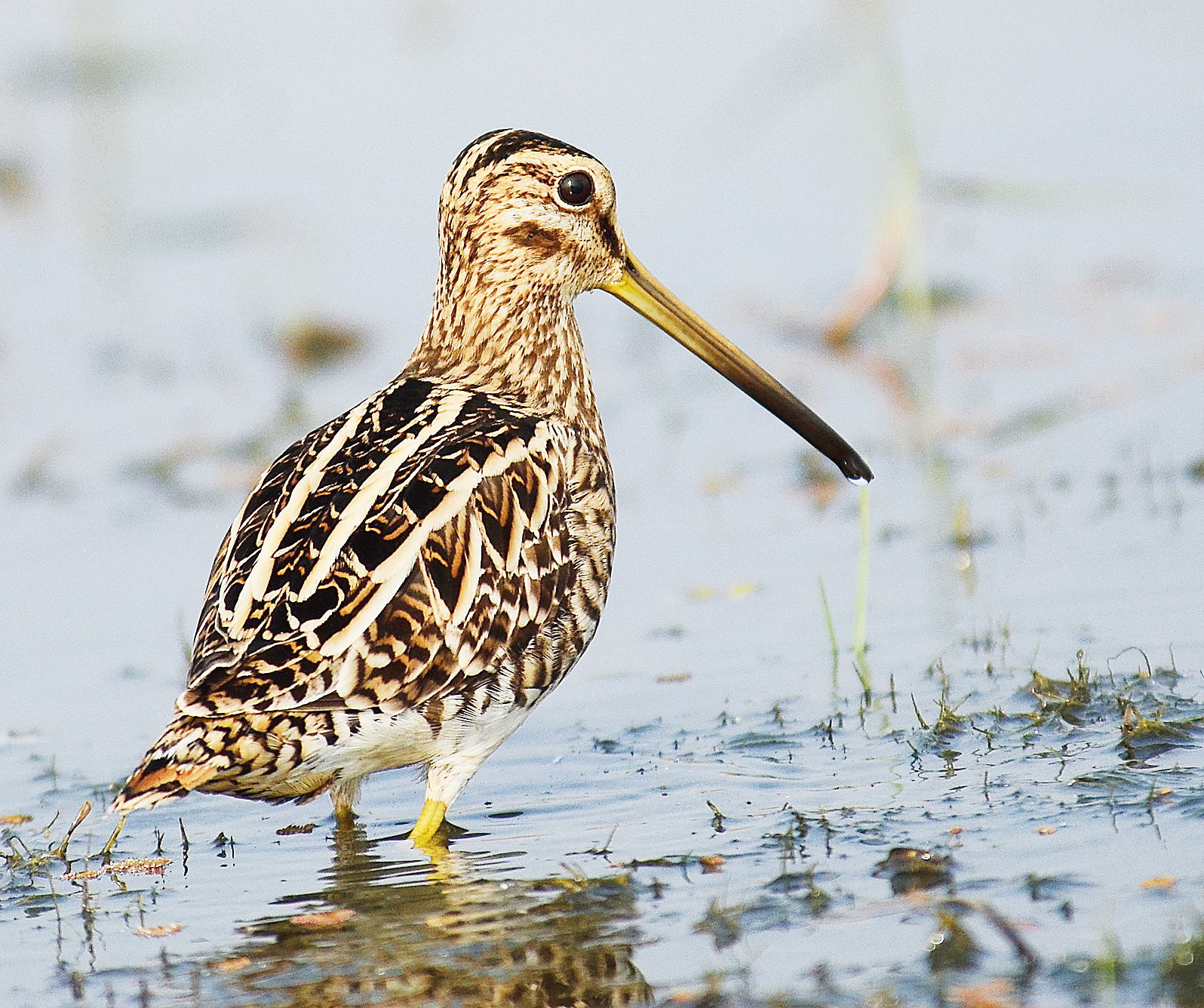 This bird is a native of northern Russia, where it breeds and migrates to southern Asia in the non-breeding season, which is also the cold season in the southern areas. It is a medium-sized, skulking, wading bird with short legs and a long straight bill. Both sexes are mottled brown above, with paler buff stripes on the back, dark streaks on the chest and pale under parts. Snipe eats worms and insect larvae which it uses its beaks to dig out, even when it cannot see them. The snipe builds a grass-lined shallow scrape for its nest, usually on dry ground within marshes, swamps, fens and wet meadows. 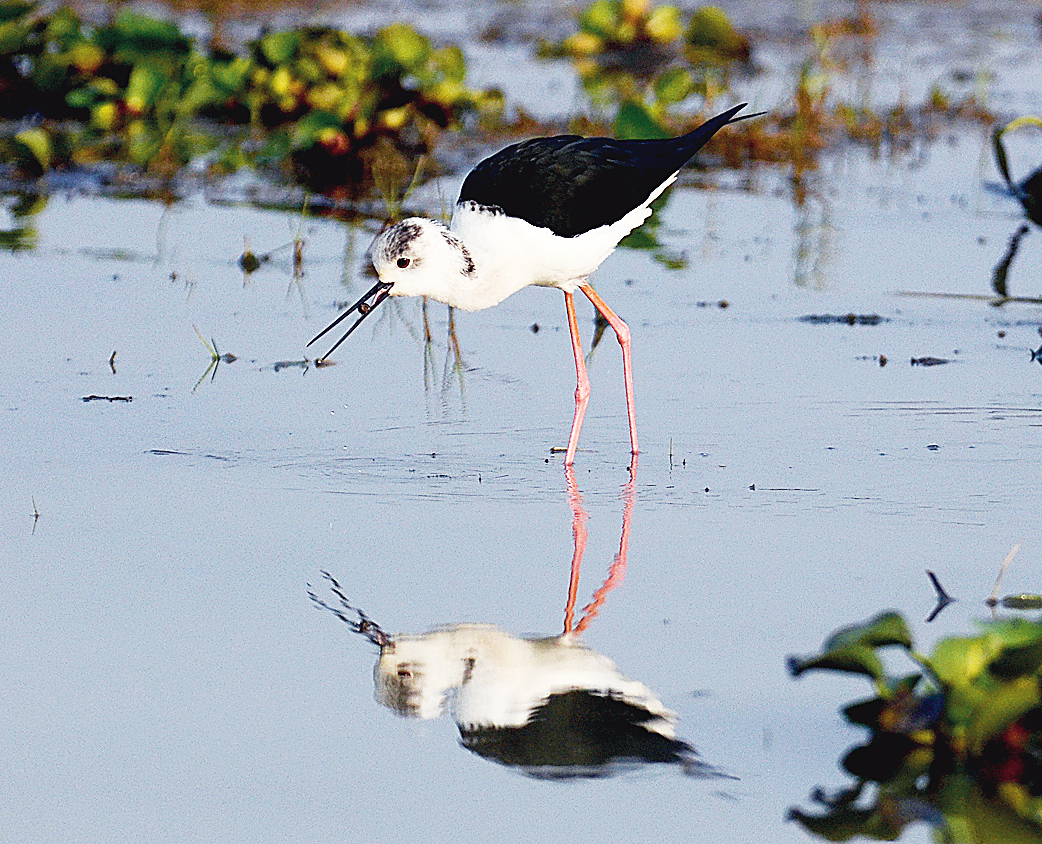 This wader with very long legs (hence the name) is found in brackish or saline wetlands in warm or hot climates. It has a long, thin bill. Stilt feeds mainly on insect larvae, snails, crustacea and worms. This bird is sometimes migratory and moves close to seas and oceans in winter.