The festival honours the birth of Indian scholar-saint Naropa

Lakhs of followers of the Drukpa sect come to Ladakh for the Naropa festival, known as the Kumbh of the region
Sourced by t2
Shrestha Saha   |   Published 01.11.18, 07:21 PM

The moment people around you hear you are taking a trip to Ladakh, well-meaning advice starts pouring in, along with a long list of medicines that must be carried at all times. Needless to say, this doesn’t bode too well with the excited heart that is jumping at the prospect of seeing the much-talked-about place for the first time.

As the flight from Delhi lands in Leh at 7am, the sharp dip in temperature catches you off-guard. The next thing that does is the first sight of the barren mountains in front of you. It is advisable to rest in Leh for a day after reaching so that your body acclimatises to the high altitude.

t2 was part of a delegation attending the Naropa Festival 2018, a Buddhist festival to honour the birth of Indian scholar-saint Naropa, in September. And as one had to restrict the exploration of the valley to sundown, our evenings were spent at a small hotel making new friends around a bonfire.

Popularly known as “Rancho’s School”, this was the setting for the famous scene from the Aamir Khan-starrer 3 Idiots where a very flustered ‘Silencer’ is almost electrocuted by some naughty students.

Druk Padma Karpo School was built as an experiment to bring in traditional Ladakhi culture into the modern education system. The goal was to prevent youngsters from leaving the region in search of a better standard of education. Built on an environmentally sustainable model, using local materials only, this school has received many national and international awards. It even has a separate Rancho section with Rancho’s Cafe, which is a great draw for tourists. The campus is on a low ground, with the mountains towering over it, all around. One can only imagine what a quick game of football must feel like in a place like that. 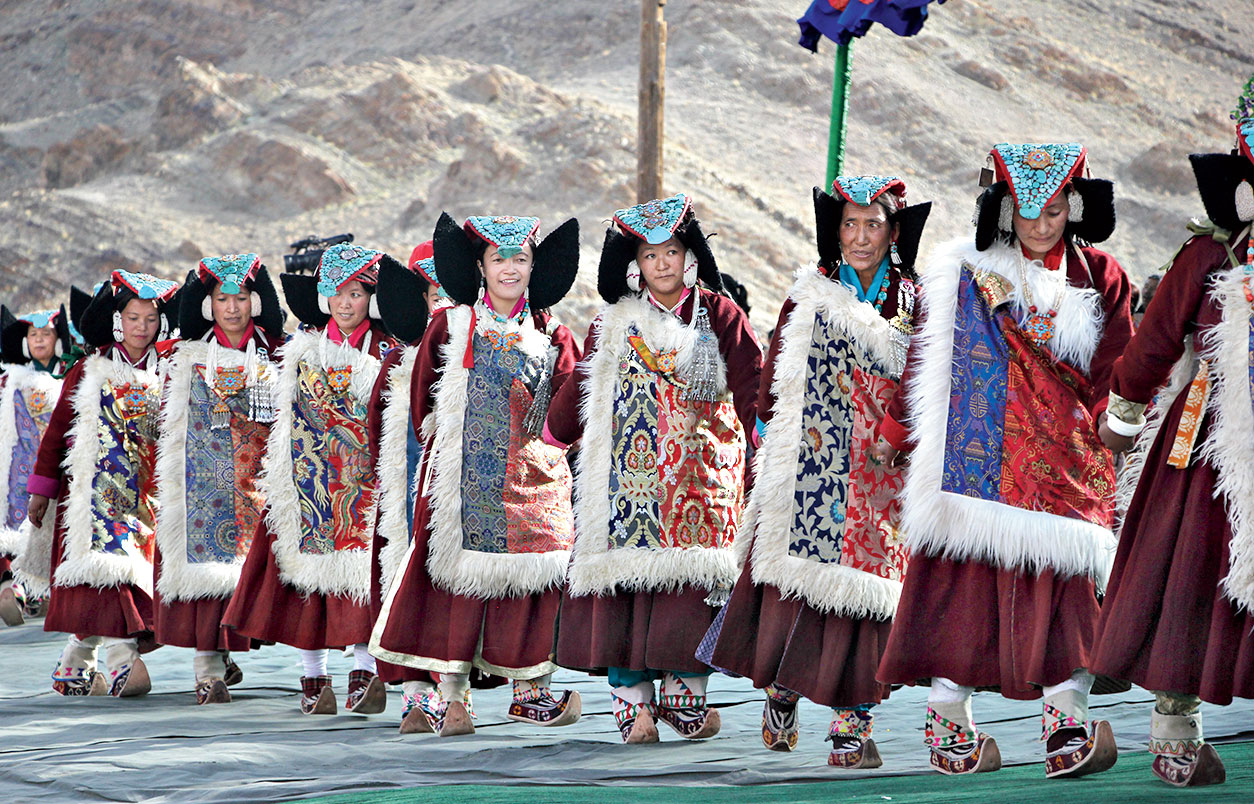 The Ladakhi dance, Shondol, being performed at Naropa Festival in Leh
Sourced by T2 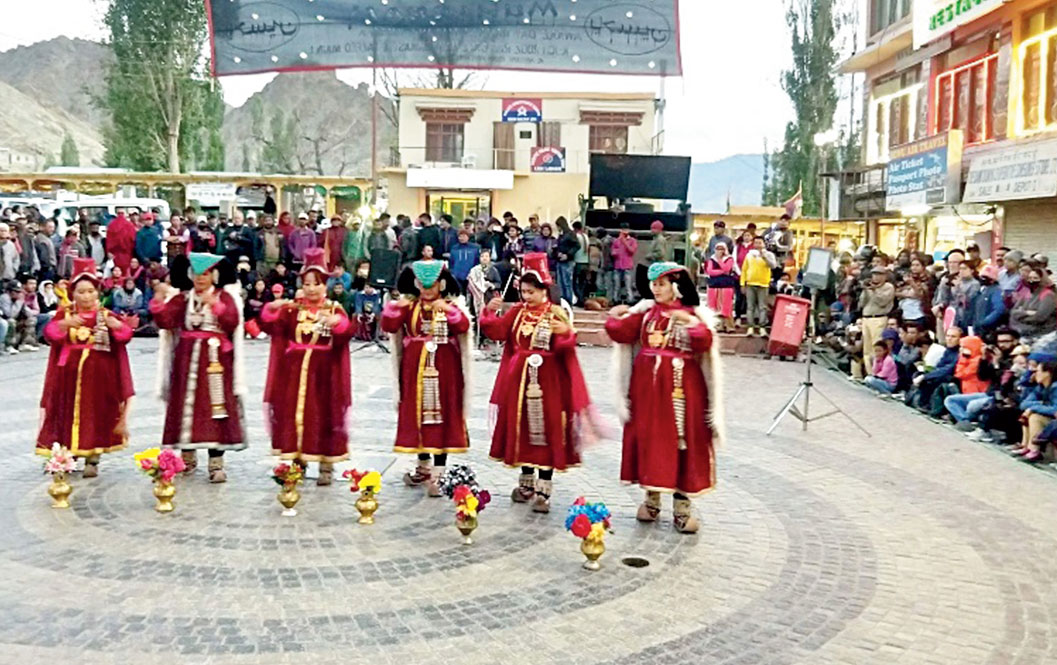 Situated at a T-shaped junction, Leh Main Market is a vibrant spot in the middle of Leh town, reminiscent of the bustling ‘mall road’ in Shimla, Mussoorie or Manali. From Tibetan Refugee Market stalls in one corner to rooftop coffee shops with a glorious view of the Leh Palace in another, the market is like a living, breathing, excitable human being, waiting to greet everyone with open arms. From dry fruits to clothes, everything can be purchased from stores or the street-side vendors. We were lucky enough to catch an impromptu Ladakhi dance performance here one evening. 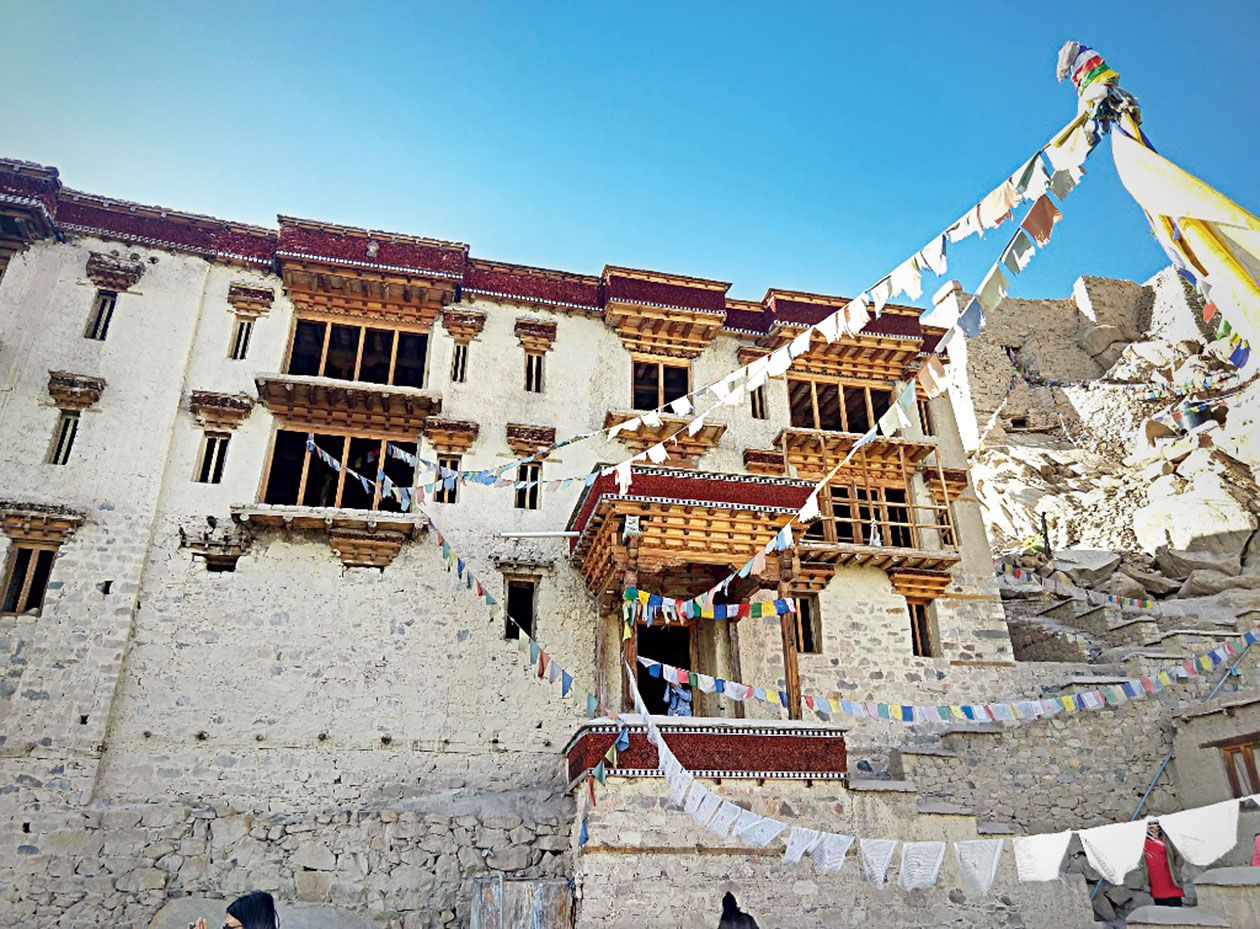 Situated at a distance of 12km from Leh, Shey Palace was home to the royals of Ladakh. Now housing a 12ft Buddha statue, the view from this monastery is one of the best in the east of Ladakh. Built into the mountain, there is a rustic charm to this palace which is now managed and cared for by the Drukpa Hemis monks. 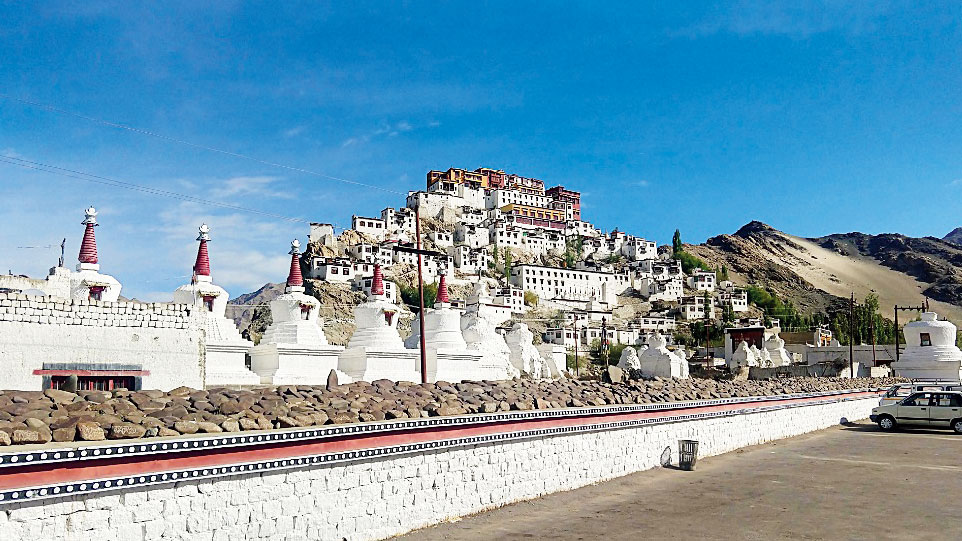 Thikse Gompa, a monastic complex at the top of a rocky hill
Sourced by T2

A monastic complex situated at the top of a rocky hill, reaching Thikse involved a treacherous trek once upon a time. Now, one can drive up to the Gompa doorstep and then climb the stairs that allow different kinds of view at each level. There are a few temples housed within the complex — dedicated to Tara, Maitreya and the ‘Protectors’. The intricate woodwork in the Tara temple is a sight to behold, with another large statue of Buddha seated inside the main complex area. The view of the sun setting against an expanse of land, from behind a prayer wheel, is unforgettable. 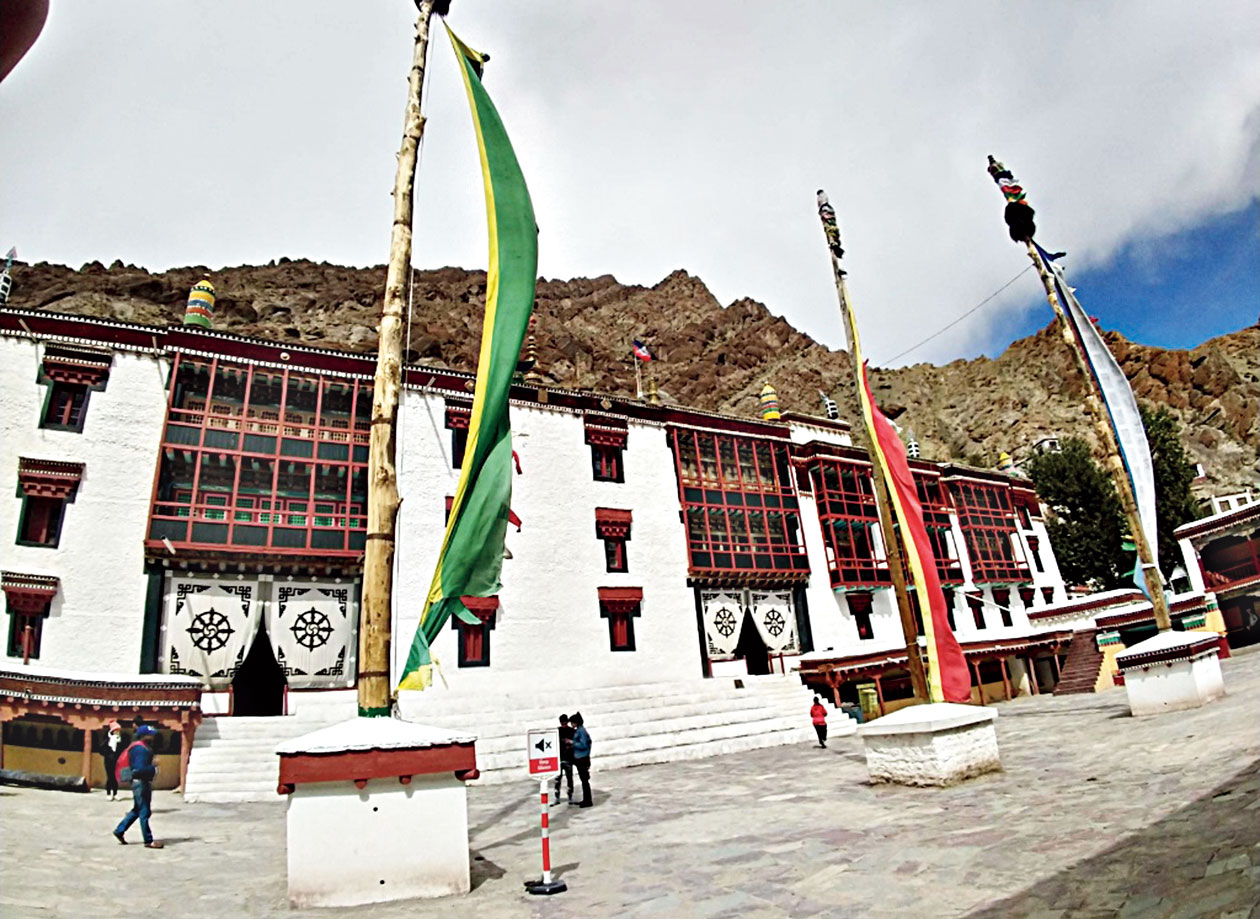 Located in a valley 40km from Leh, Hemis Monastery is a treasure trove of beauty and Buddhist artefacts, with a museum tucked away in the basement. It is supposedly auspicious if you visit the monastery and it snows. We witnessed light, unexpected snowfall in September. Photography is not allowed inside the museum but the gift shop is a great place to pick up curios as they are cheaper than those in the market.

Day 1 of the Naropa Festival
Sourced by T2 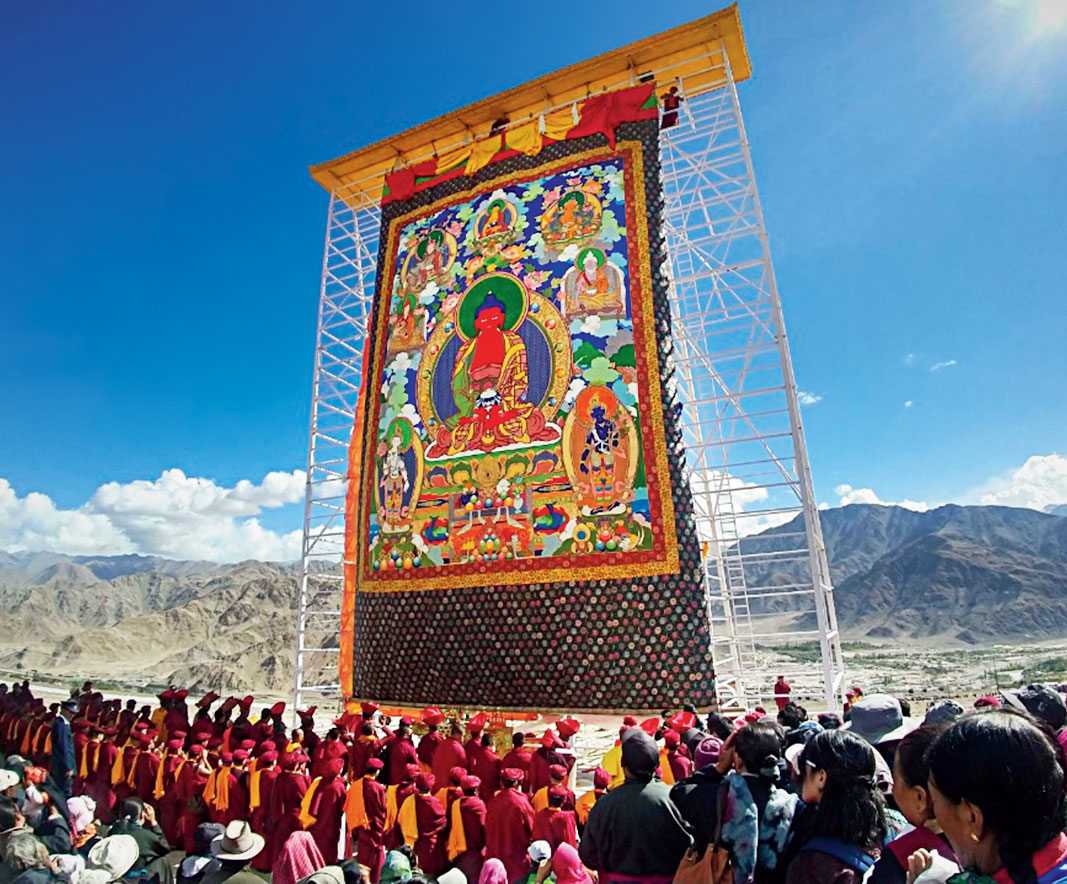 A surreal moment during the festival was the unfurling of the silk-embroidered brocade of Buddha, called the Thangka (it’s the largest in Ladakh) amidst chanting by the monks
Sourced by T2

Day 1 of the Naropa Festival saw the unveiling of Naropa’s crown ornament that was brought from Hemis Monastery to Naro Photang, where the stage was set for various Ladakhi cultural events. Live music acts by performers like Sonu Nigam and Akriti Kakar were lined up.

Day 1 also saw the inauguration of the Naropa Fellowship, which aims to mobilise the youth from the Himalayan belt and train them into entrepreneurs. The Naropa Fellowship faculty features Chevening scholars, CEOs, entrepreneurs, and professors from reputed international universities, curating and conducting this year-long programme.

A surreal moment during the festival was the unfurling of the silk-embroidered brocade of Buddha, called the Thangka (it’s the largest in Ladakh) amidst chanting by the monks. This became a part of the daily activities with the Thangka being unfurled every morning from 8am to noon. The festival enjoys the patronage of Drukpas worldwide. 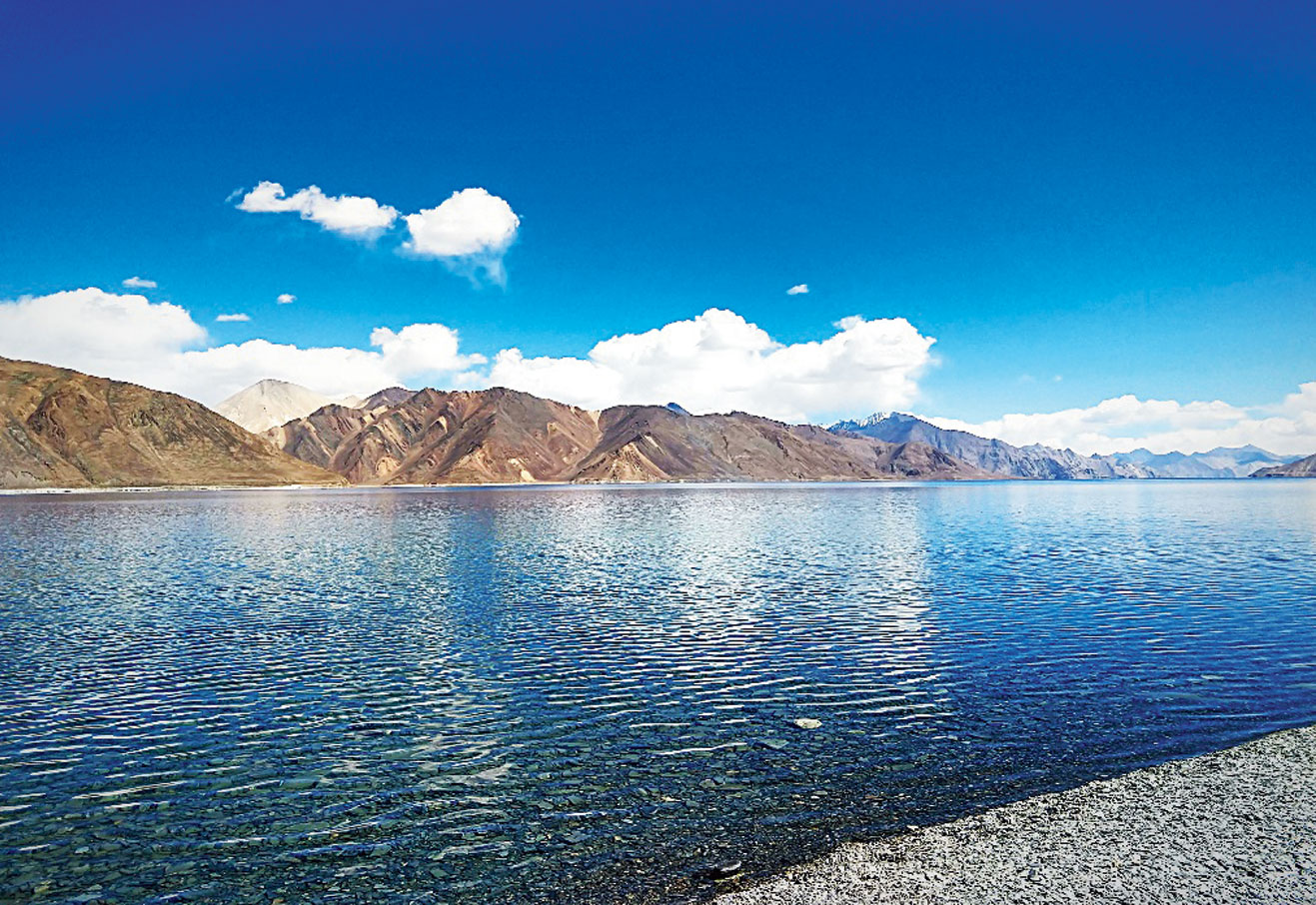 To reach Pangong Lake, one has to cross the second highest pass in the world — Changla pass — located at more than 17,000ft above sea level. The cold touches your insides while the warm thukpa from the Changla Cafeteria seems like a best friend you never thought you’d make. The road is treacherous in most parts and the sight of old, overturned buses lying at the foot of the cliff, covered in soot from over the years, makes your heart skip a beat.

The mountains are, however, a humbling experience. After crossing the pass, there was a stretch when the driver parked and we got down to meet marmots — the friendliest squirrel-like animals possible. Not only do they come out to greet human beings, they also pose for pictures! 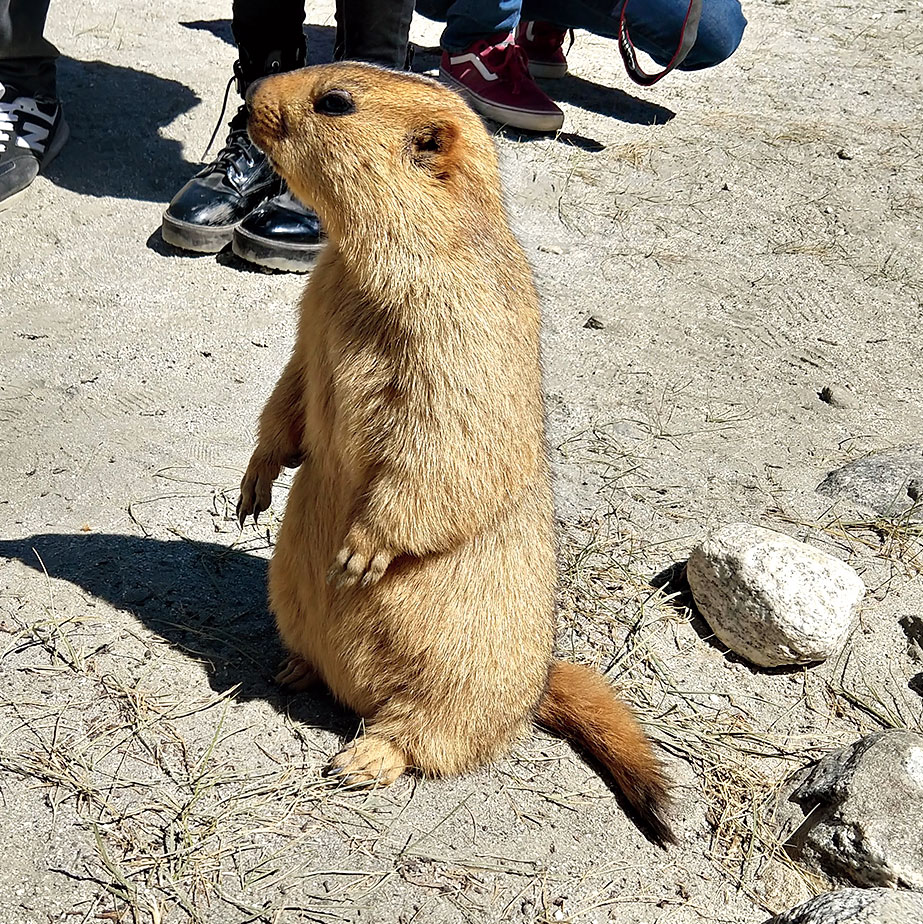 The drive from Leh to Pangong is about five hours and the first glimpse of the lake we got was when we were still a kilometre away, through a gap between two mountains. The blue of the lake and the skies stumps you into silence for a few minutes as you gather your thoughts and stare out of the window. Then comes the sheer expanse of the lake that the film 3 Idiots could not do justice to. We spent two hours sitting by the lake, learning to pile and skip stones, for Pangong lake demands and deserves your silence. The only flip side? Some props from 3 Idiots — Kareena Kapoor’s yellow scooter and the three famous bum seats — are placed there as photo-ops. A sore sight in the midst of such stark beauty. 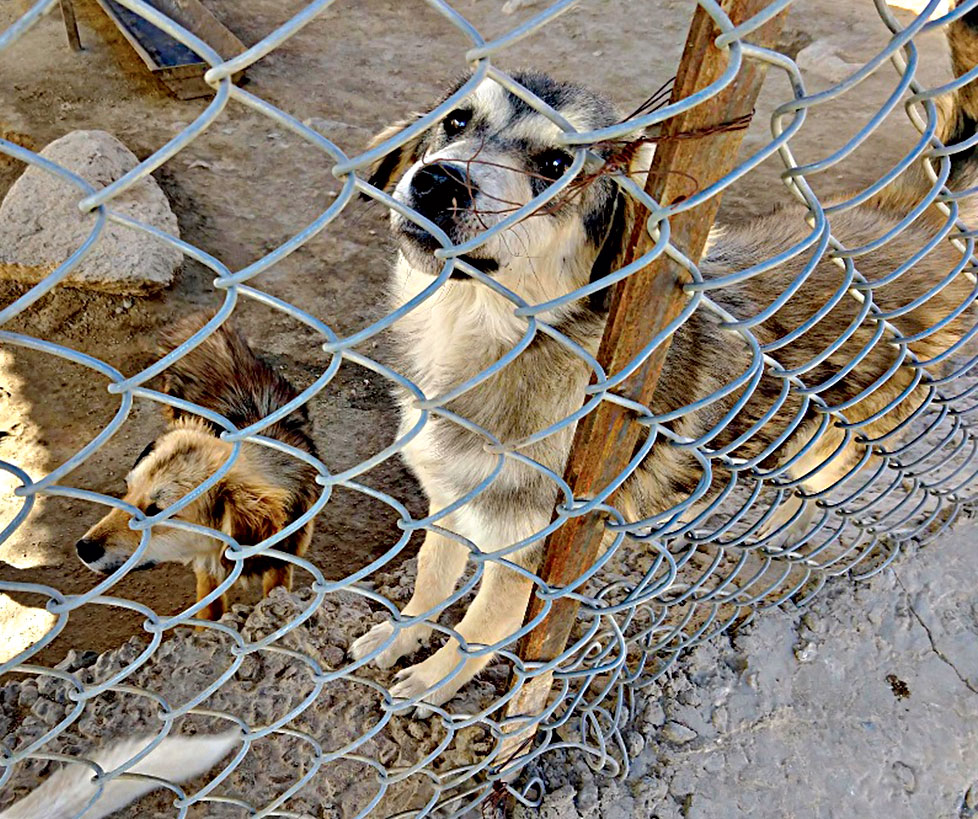 Live to Rescue Animal Sanctuary outside of Leh
Sourced by T2

‘Live to Love’ began as a small saying amongst Ladakhis which soon gained momentum in the community to solve problems through empathy, care and action. This programme has been an enabler for multiple goodwill projects, one such being the Live to Rescue Animal Sanctuary outside of Leh. The Young Drukpa Association of Ladakh launched this sanctuary as an attempt to end the euthanising of thousands of stray dogs by rehabilitating them. A must stop for all animal lovers, this sanctuary is now home to dogs, baby camels, cows and chicken. A lot of them get adopted by Ladakhi families.

Wanderers Terrace and Cafe: Situated on the third floor in Leh Main Market, the food here is mostly continental with a wide variety of tea and coffee. The view of the Leh Palace from the terrace cafe is one to die for!

Bon Apetit: A fancy outlet on Changspa Road and a must-visit for all celebrities, one can plan a beautiful candle-lit dinner here. The view is a vast terrain of emptiness with mountains behind it, and the food is western and fusion. One can even get alcoholic beverages here.

Himalayan Cafe Restaurant: A wide variety of cuisines are available at this cafe in the Leh Main Market. The food is simple yet delicious and it is the perfect place to experience some authentic Ladakhi cuisine.

Tibetan Kitchen Restaurant: Located on Fort Road behind the Tibetan Market, this is where we had the best Thukpa. Their fried momos are a must-order too.

PS: Maggi tastes really different in Ladakh! It is tastier, and gives a new definition to “comfort food”. Having had Maggi in every nook and corner, the winner is the stall opposite Shey Palace, 12km from Leh.