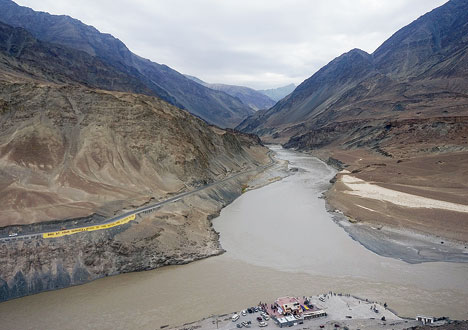 Though it is an early morning flight from Delhi to Leh, it is buzzing with the happy energy of eclectic, grinning travellers from near and far, sipping Kashmiri kahwa. Savouring the view from my window seat, I take in the changing topography as we leave the plains behind. Within an hour or so of flying, the Himalayas start showing up; rugged and tall, their majesty looming larger with every passing minute.

It’s my second trip to Ladakh in Kashmir after a gap of nearly a decade and I’m looking forward to my four-day break in the mountains.

At the arrivals of the K.B. Rimpochee Airport, I spot my name scrawled on a piece of paper in the hands of a smiling young man, Tsewang, who welcomes us to Leh. We climb into his rickety Maruti van that’s probably as old as he is and in 10 minutes we reach our lodgings — Adu’s Eternal Comfort.

We’re greeted by a merry garden filled with row upon row of double-bulb petunias, dahlias and marigolds sharing the earth with cauliflowers, carrots, mint and other leafy vegetables. A wicker chaired sit-out under a shade with a backdrop of the ubiquitous, swaying poplar trees and the rock solid Stok Kangri range completed the picture.

It is highly advisable that the first 24-48 hours in Ladakh be spent in acclimatising oneself as the oxygen levels are low and the body takes some time to adjust to suddenly being at an elevation of 3,000m. Given that we only have four days, we budget day one to adjust to the place.

Getting to know the host and other co-travellers often leads to fascinating conversations and, to our amazement, we find that we have amidst us an elderly Frenchman who has travelled by bike all the way from France to Leh! He proudly shows us his visas and route map as proof. The rest of the day is spent on gorging on a farm fresh lunch, soaking up the sun under an azure sky and listening to the symphony of silence created by whistling poplars, a gurgling faraway stream and the odd army chopper circling above.

Well-rested, we start early the next morning for Leh Palace. A short walk gets us to the market area from where we navigate the winding lanes of the old town of Leh and negotiate a slightly rocky uphill walk to get to the gates of Leh Palace.

Currently maintained by the Archaeological Society of India (ASI), the Leh Palace dates back to the 17th century and is designed to look like the Potala Palace in Lhasa, Tibet. Nine storeys tall and built of stone, wood and mud, the insides of the palace stay comfortably cool even when the sun is beating down.

We trek all the way up, crossing a maze of corridors dotted with murals and ongoing photographic exhibitions as well as a royal shrine until we make it to the top. Mountains have a way of first making you breathless and then taking your breath away! Once atop, we’re rewarded by an unobstructed panoramic view of the entire town, making the climb completely worthwhile.

Peckish and hungry for some shade too, we head towards Fort Road for lunch. Leh is one of those towns where German and Swiss bakeries and bohemian cafes can be found as easily as Tibetan, North Indian and Kashmiri restaurants. We settle for a traditional lunch of thukpa and steamed momos at the Tibetan Kitchen and wash it down with fresh mint tea.

No trip to Leh can be complete without lots of browsing and window shopping and Fort Road is quite the area for it. Less crowded than the main market, Fort Road is lined with shops on both sides selling an array of handmade carpets and rugs, Pashmina shawls, scarves and stoles, thangka paintings, silver jewellery with precious stones and other bric-a-brac. After striking a bargain for a semi-Pashmina stole and a set of pearl earrings that together set me back by Rs 2,300, we stroll back to the market area.

The sound of a deep drone and drum beat floats in as we reach the market and find it coming from the Chokhang Vihara, a quiet haven right in the middle of all the hustle and bustle. Stepping in, we are greeted by fluttering prayer flags, a giant prayer wheel and the chanting of Om.

A part of the main market has now been made traffic-free. With concrete pavements on both sides and an elevated level in the centre with benches on it, it is just the place to sit at with a cup of kahwa and watch the world of Leh go by as the sun comes down.

Done with the town attractions, we decide to spend the next two days monastery hopping. Tsewang is contacted once more and reports promptly after breakfast, ready to drive us to Likir and Alchi Gompas, about 60km west of Leh. Unlike the hilly drives in the Eastern Himalayas, the roads here don’t have hairpin bends. They are fairly wide and flat with the monumental mountains enveloping you continuously.

The picture is fairly monochromatic with shades of ash, slate grey, and brown ruling the frame, interrupted only every now and then by colourful Buddhist prayer flags. Throughout our two-hour drive, we see army camps including a Shaurya Sthal or Hall of Fame dedicated to the Indian soldiers who have laid down their lives in Indo-Pak wars. A humbling sight.

En route we witness the sangam or the confluence of the two mighty rivers: the Zanskar, which flows in from a north-easterly direction, and the Indus, which is quite the lifeline of the landlocked terrain. It is a photo op not to be missed.

Nestled on top of a little hill in a relatively isolated village, the Likir monastery houses the imposing statue of the 75ft-tall, Maitreya or the future Buddha, and also offers spectacular views of the cascading mountains and the entire valley. After offering our prayers, we descend to proceed towards one of the oldest monasteries in the region — Alchi.

A more spread out complex, the most fascinating part of the Alchi Gompa is the imagery of the trio of Avalokiteshwara, Maitreya and Manjushri. Though photography is prohibited, these imposing statues are draped in dhotis with intricate paintings and depictions including the life of Buddha, holy places and temples, making it a sight to remember. A group of local women sit right outside the main entrance, their adept hands busy shelling almonds to extract oil from, their collaborative beating of nuts sending out quite a sonata into the air.

We save our hike to the Shanti Stupa for our final day. Built more recently in 1985 and inaugurated by His Holiness, the Dalai Lama, to commemorate 2,500 years of Buddhism, this white stupa or chorten sits on a hilltop in Chanspa. We choose to go in the evening to catch the sunset from there and to see it illuminated.

A 20-minute walk followed by an arduous climb of about 500-odd steps gets us to the top. The trick to negotiate the climb is to take 10 steps at a time, have a sip of water and catch your breath. Once on top though, we are left gasping anyhow, for the stupa stands pristine white and one half of the range stands bathed in the glow of a setting sun, juxtaposed against its own shadow.

We are in for a bonanza as by the time we are back in town, a full moon has crept out from behind the clouds and is shining bright. Donning my newly purchased T-shirt that says ‘I got Leh’d’, we sit around a crackling bonfire and raise a toast to Leh. Until we meet again, julley!

The writer is a senior communications professional and an avid traveller