Jewel in the desert 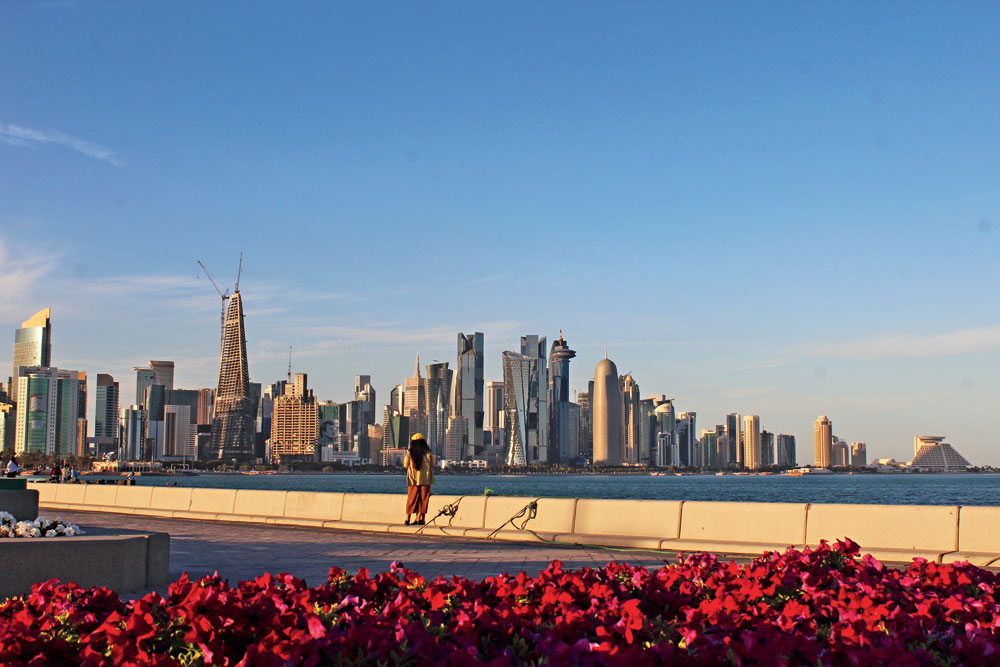 With its expansive deserts, flashy hotels, futuristic architecture and a challenging past, Qatar is quite the Arabian wonder. And its capital city, Doha, is truly an example of East-meets-West. It fascinates with a blend of cultures, landscapes, people and diverse lifestyles.

When I began my trip to this rich Arab nation at the invitation of Qatar Airways, little did I expect the weather to be not just pleasant, but at times even cool. Without a doubt, winter, which can last from November to early April, is the best time to visit this country.

Even before we landed in Doha, our holiday (read: work!) had begun. The five-hour-20-minute direct flight from Calcutta was a smooth experience in itself, thanks to the impeccable hospitality, top-notch amenities, and overall comfort levels that were topped off with a culinary treat — think an a la carte menu for you to choose from at any point of time — in Qatar Airways’ business class. Right from the time you step into the aircraft to the time you alight and go through immigration, the airline ensures that the process remains hassle-free. 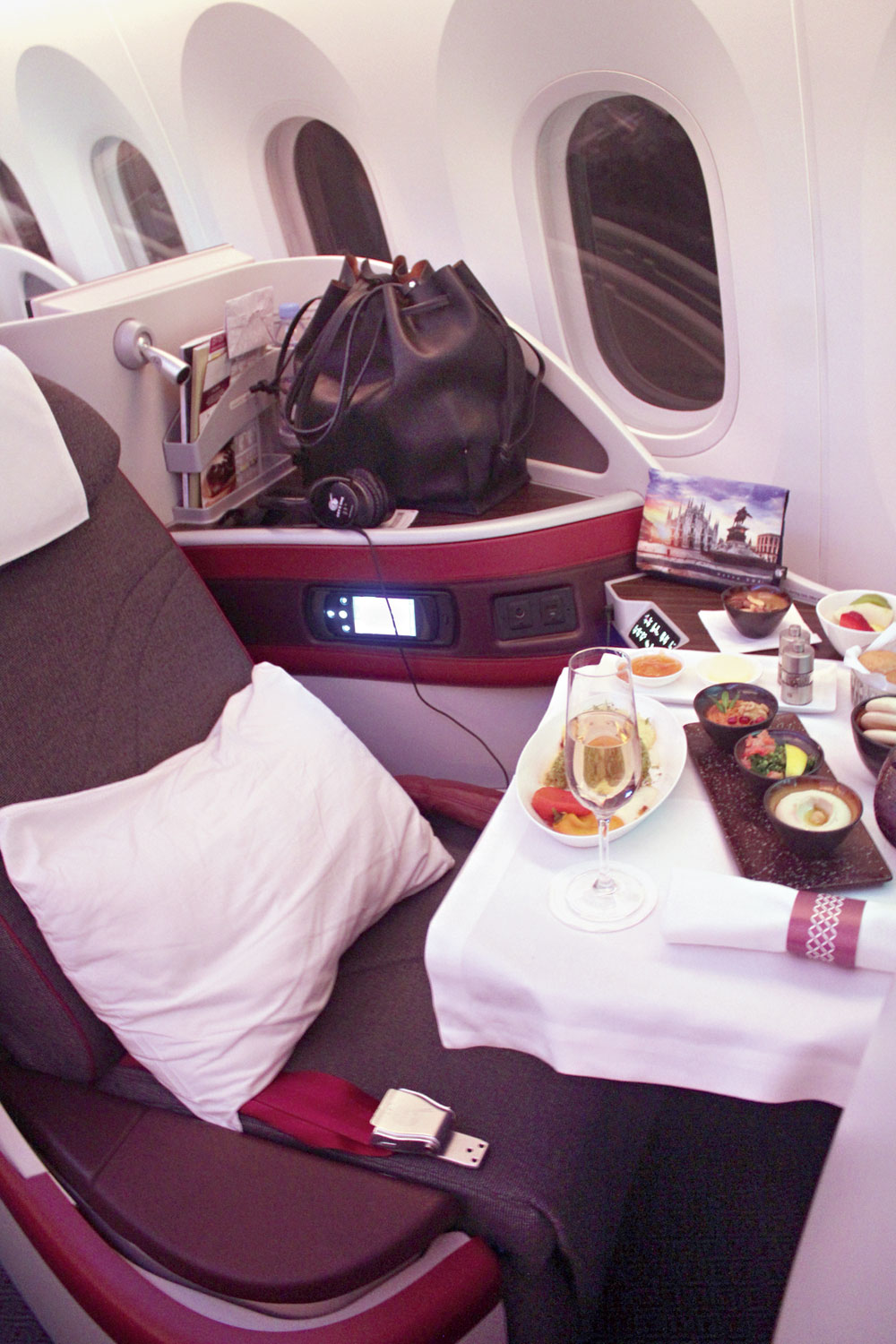 Flying business class on Qatar Airways made us wish that the flight was longer!
Picture: Nandini Ganguly

As I sat comfortably in my spacious cabin — the armrest rises up to create a nearly enclosed space — and a sincere steward poured me a bubbly, I noticed a rather unusual conversation between an elderly lady and a cabin crew. Even though there was a language barrier and neither could understand what the other was saying, the cabin crew was being extremely attentive and patient.

If that was any index of the service on offer, I was going to be well taken care of — and I was. This was one of those rare times when I wished that my flight was a longer one.

At Hamad International Airport, I was escorted by an Al Maha Services hostess to the arrival lounge where all the formalities were completed and I was through immigration without having to stand in a queue. There I was, headed to the InterContinental Doha on the West Bay shore of the Arabian Gulf, which would be my home for the next five days. 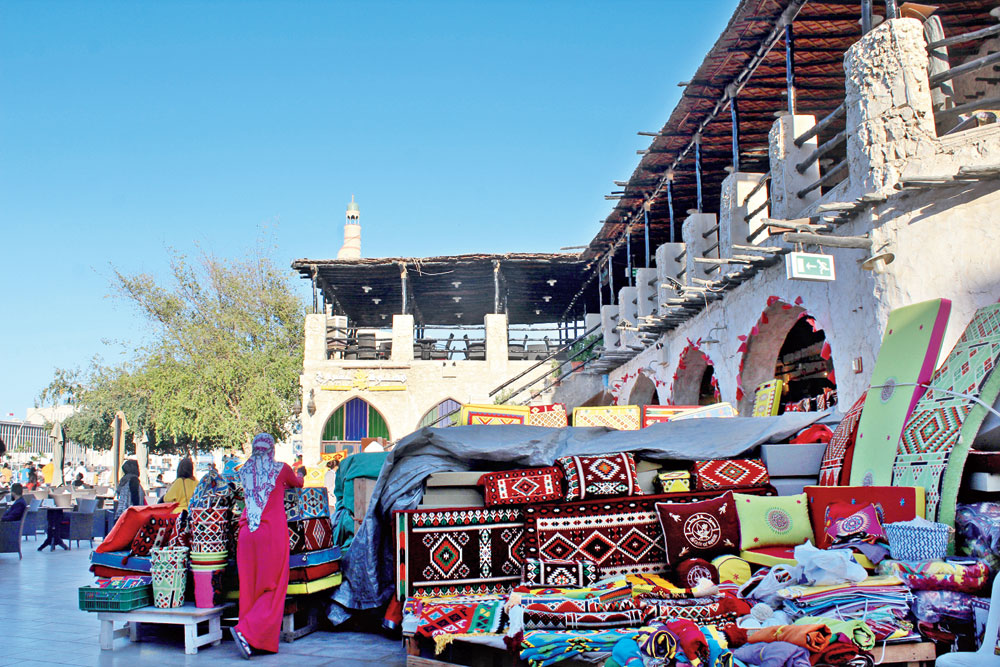 Story goes that the Souq Waqif, or standing market, is so named because traders would be forced to do business standing atop stools when the tide would come in and flood the market
Picture: Nandini Ganguly

One of the first things that you notice about the country that has one of the highest per capita incomes in the world is that the old and the new sit next to each other. While most of Doha is relatively newly-built, the old quarters, reminiscent of the old Arabian way of life, take you back in time.

You can view this blend most prominently as you stand at the Doha Corniche, a 7km waterfront promenade along Doha Bay, with the spectacular sight of the highrises of the West Bay on one side and old Doha on the other.

Souq Waqif, one of the places that stood out for me, is an old marketplace where you will find everything from spices to handicraft and jewellery, from sweets to falcons. The heritage market which gets its name from souq, meaning market, and waqif, meaning standing, is unexpectedly large and has a maze of alleyways where you can taste, smell and experience Qatari traditions. 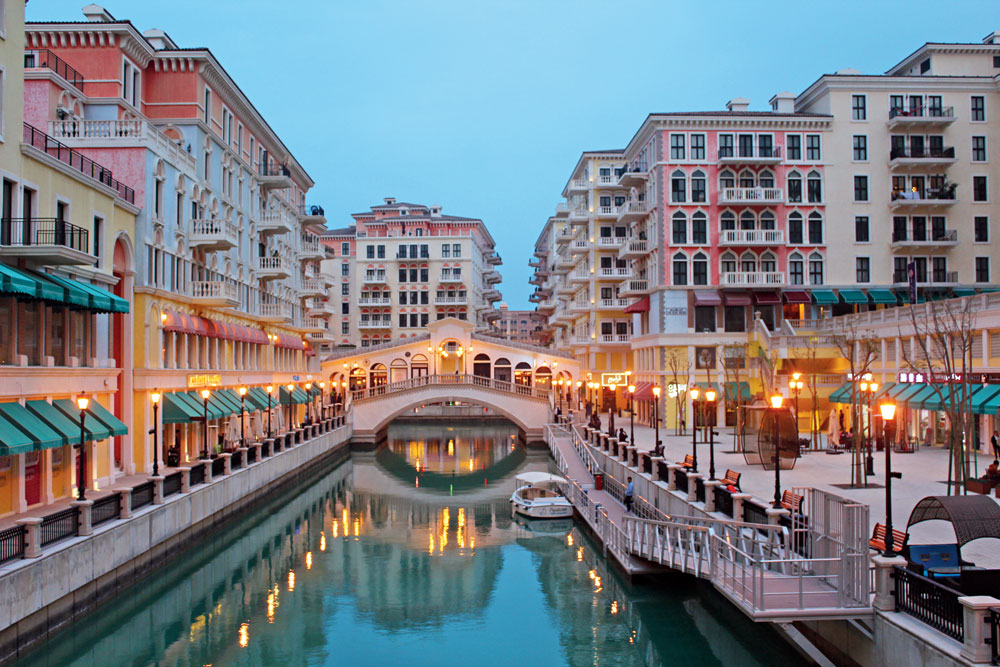 One part of The Pearl-Qatar is a Venice lookalike
Picture: Nandini Ganguly

The Pearl in the crown

Although just a half-an-hour drive from Souq Waqif, the artificial island of The Pearl-Qatar seems like it’s on a different continent. It is the true representation of luxury with upmarket restaurants and al fresco dining, marinas lined with yachts, posh residences, premium stores and designer labels.

Here, European and Mediterranean styles of architecture jostle with Arabic elements to give the place its distinctive buildings that stand out from the rest of the country. The ‘Arabian Riviera’ is the first real-estate development where non-Qataris could buy homes. So, it has become truly cosmopolitan in nature. 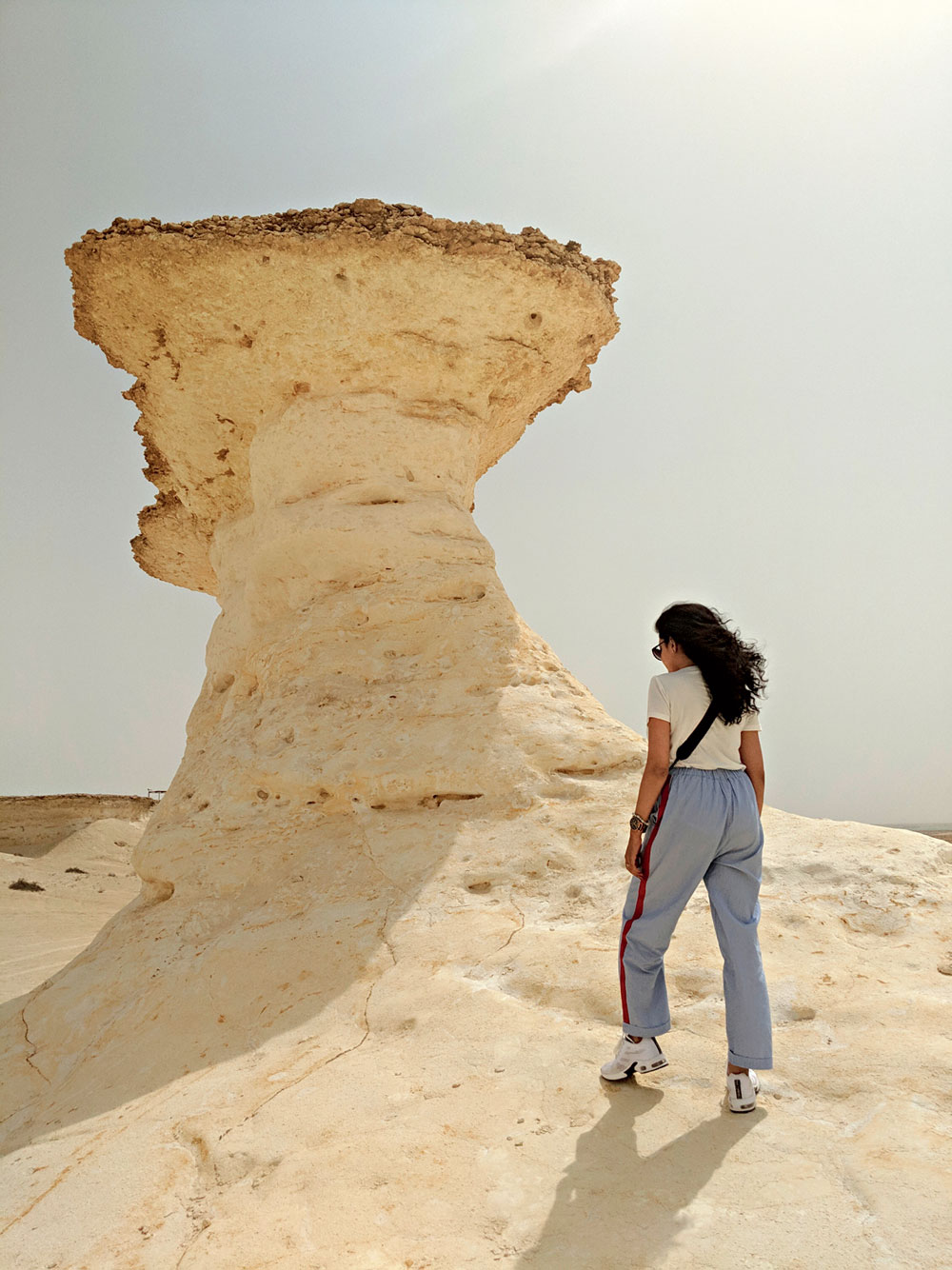 Qatar is in love with art and it reflects in the abundance and variety of museums and vibrant art galleries. From modern and contemporary art to historical objects, Islamic artefacts and experiential offerings, museums here put the past and present into perspective. On our itinerary were the Museum of Islamic Art, Msheireb Museums and The Fire Station Artist in Residence, which are entirely different in the kind of art, artefacts and culture that they focus on.

The Museum of Islamic Art, which stands tall on a man-made island near the southern end of the Doha Corniche, houses Islamic artefacts. Made of limestone, it has a geometric design that is dominated by Islamic architectural influences.

On the other hand, the Msheireb Museums, which is situated in the old city, has four heritage houses — Mohammed bin Jassim, Company, Bin Jelmood and Radwani — that give you a peek into the nation’s social, cultural and economic background and development.

Before some dune bashing in an SUV, one can take a ride on the original ship of the desert
Picture: Nandini Ganguly

The beautifully restored houses have unique ways in which facts are presented. From learning about Qatar’s first oil company, its workers and their families, and the setbacks faced in the initial years, to the enslavement of the people and the reforms the country undertook, an afternoon spent soaking in the history should be on your itinerary. 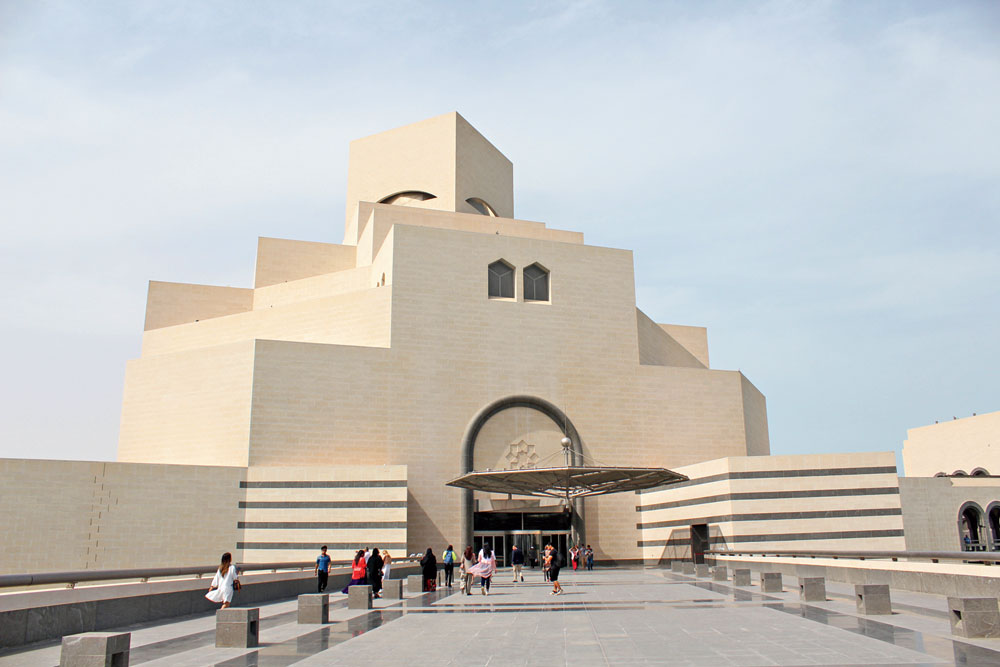 The architect of the Museum of Islamic Art was the legendary I.M. Pei, who had also designed the famous Louvre Pyramid in Paris
Picture: Nandini Ganguly

The Fire Station Artist in Residence is housed in an old building that earlier belonged to the fire brigade and showcases an eclectic mix of art, apart from creating a community for local, aspiring artists to enhance and nurture their skills through various programmes.

While the old quarters and the Doha Corniche make for good frames (think aesthetics), for me it was the almost uninhabited, visually engaging Bir Zekreet, a village near Dukhan on the west coast of Qatar and a part of the Unesco recognised Al Reem Biosphere Reserve that stood out for its unusual desert landscape and vastness. Passing through a natural reserve where you can see Arabian oryx, the national animal of Qatar, we reached Bir Zekreet.

There’s also a perfectly preserved fort-like film set, called the Film City, that looks like a deserted village and makes for a great backdrop for pictures.

This is also where you will find very unusual topography, almost other-worldly, with mushroom-shaped limestone rock formations. Just when you think that’s all, in the middle of nowhere (literally!), amidst the rough landscape, lies an installation named East-West/West-East, consisting of four humongous metal plates, by the American artist Richard Serra. There’s nothing, absolutely nothing for miles. So it’s best to get your own transport and carry water and food. While it’s easier to get lost here, thanks to our amazing guide and driver, we were right on track throughout.

Katara cultural village has an art centre, music academy, fine arts society, photographic society as well as an amphitheatre. The gold walls, sparkling colourful mosaic of tiles adorning the mosques, towers and building walls held us in awe. Visit the place for the architecture, whether it’s the soothing Blue Mosque, or the golden one glittering in the sunlight.

Dune bashing is one of the most thrilling experiences that you can participate in. Driven by experienced drivers, the ride in the Toyota Land Cruiser starts feeling like a rollercoaster ride when the vehicle goes over the shimmering sand dunes of Mesaieed. Right outside the city and, therefore, not far from an urban setting is where you get to see this adventurous side of Qatar.

After deflating the tyres at a small, desert camp where you can ride a camel, take a picture with a falcon or drink some karak, you head for the dunes as steep as they are high. My fellow passengers and I laughed and shrieked as we saw the car gliding through the dunes, almost as if it’s about to topple, but, thankfully, doesn’t!

After driving for about half-an-hour, we reached a surreal place named Inland Sea or Khor Al Adaid, where I took in the beautiful surroundings and watched the aquamarine sea blending with the calm desert. This is the place which forms the border between Saudi Arabia and Qatar.