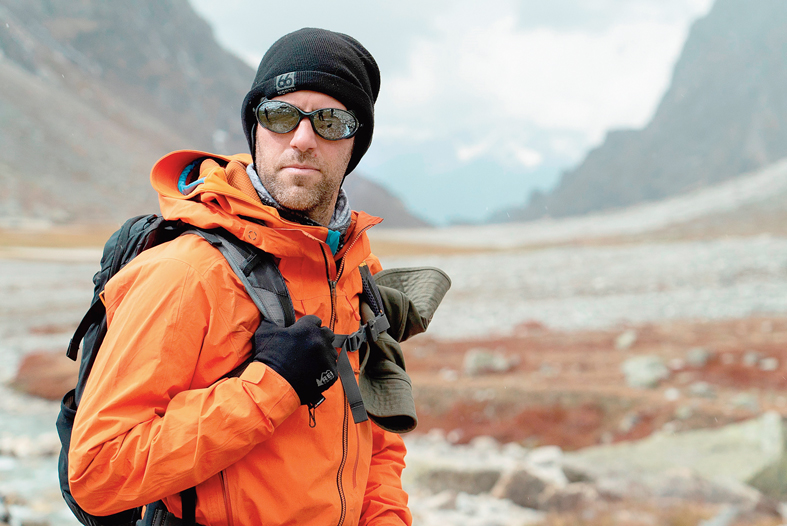 Ryan Pyle unplugs from his urban life and heads out to explore the best adventure trekking destinations in Asia for the show Expedition Asia that is focused on adventure, exploration and cultural education. The 10-part series Expedition Asia with Ryan Pyle airs on Discovery, Discovery HD on Mondays at 8pm and on the newly launched app Discovery Plus. The Telegraph connected with the Guinness world record-holding adventurist stuck miles away from his Dubai home, over phone.

Where are you calling from?

Istanbul. I was filming in Ethiopia when the world started to lock down and I was unable to go back home to Dubai. So I came to Istanbul, which was still open. I have been here for eight weeks now. I was in a hotel for the first few weeks but now I have rented an apartment. I think I will be here till July or may be a bit longer.

So you are living out of a suitcase now…

That’s how I live for 300 days a year when I am filming. I am home in Dubai only four or five days each month. At this time, I only have with me what I packed for my shoot in Ethiopia, though I have been able to do some online shopping. The uncertainty of not knowing when I will be able to get back to work is very stressful. Otherwise, I am fine.

I love adventure and I love to travel and I love not knowing what’s going to happen next. But this is not something we were ready for.

What were you filming in Ethiopia?

A global adventure series which we film in South America and Africa.

You lived in China for many years. Does it hurt to suddenly find China under fire for the spread of the virus?

Yes. A virus starts somewhere and spreads everywhere else. I have friends in China and I do a lot of filming there. And I hope to be able go back there. Let’s see how the next few months will play out.

What fascinated you about China?

When I was growing up in Toronto, I took classes in Asian culture and history. China was there in a lot of ways. So after graduation, I spent a few months in China, travelling like a tourist, with a backpack. I liked it so much that I ended up moving there. I was there for 16 years. I speak intermediate-level Mandarin. Shanghai is a city where you need a bit of Mandarin to get around. It is only recently that I have shifted to Dubai.

How did the adventure bug bite you?

I was 22 when I moved to China and I started to do story-telling work — writing and photography — covering China for the big newspapers and magazines in the United States. I did that for 10 years. Then I decided to get out of journalism and make television. I always had an interest in trekking and climbing. Once I had taken a few trips out in the mountains as a vacation, I wanted to bring my journalistic style of storytelling to a TV series.

When did you shoot Expedition Asia with Ryan Pyle?

Last year. We filmed in a different country every month for each episode. So I was in Indonesia, Malaysia, Thailand, Taiwan, Hong Kong, Mongolia, Kyrgystan, China, Philippines, India.... We finished filming in November before all this virus stuff started happening.

Where all did you shoot in these countries?

In Expedition Asia, we do these overland walking treks, like they did back in history. We take pack animals and a guide and go off to the wilderness — climb a mountain, walk across a desert and cross the jungles. The idea is to explore the world on two feet and learn about the people, the way of life and the culture.

In China, it was a 130km trek across the Badain Jaran desert in inner Mongolia. We had 16 camels as part of our caravan. In the Philippines, we climbed Mount Apo; in Indonesia we trekked through the highlands of the island of Bali — Bali is a touristy place, but our episode showed Bali in a different light — in Malaysia, we climbed Mount Kinabalu; in Kyrgystan, we trekked through the Turkestan Circle; in Taiwan, we trekked along the Holy Ridge, which is in the mountains at the centre of the island; in Thailand, we walked up an old trading route which no one uses any more; in Hong Kong, we did the Maclehose Trail as well as some rock-climbing; in Mongolia, we climbed Khuiten Peak, 4,500m above sea level, right on the border with Russia and China. There’s so much diversity in Asia….

How many kilometres do you walk for each episode?

The plan is unique for each episode as the journey, the landscape and the climate are different. It takes weeks and months to plan — find the right guide, the best route, then you need to manage the safety elements as you’d be so far away from help in the wild… It is a beautiful process. Sometimes we walk long distances, like we did 130km across the desert over 10 days in China. Each episode takes 10 to 14 days to shoot.

Since you travel in widely changing climates, what precautions do you take for your body to adjust?

My crew and I have been doing this for over 10 years now. We are very accustomed to take whatever nature throws at us. We filmed in China in March, which was winter — -10 to -15 degrees at night. In two weeks, we were in Bali which had tropical climate, 25-30 degrees celsius, and very wet. That’s the variety we want to present.

What is the size of your crew?

There’s myself and my two cameramen. We also always have a local guide who is part of the show. He explains things to me and keeps us safe. Only a local would know how dangerous lightning storms in Malaysia can be or how nature changes in the mountains of Mongolia.

You visited India. Tell us about that episode.

Yes, we were just outside Manali in October. Our goal was to scale Jagatsukh peak. We had a great guide and very difficult weather. The great thing was one could fly into Manali and in a day you could be in the wild. But in places like China or Mongolia, in order to get to wild places, it takes time. We landed in Manali with people busy with Dussehra celebrations. The trek from Manali to Jagatsukh was breathtaking and helped me imbibe the beautiful Himalayas. Beyond the physical location, the hospitality of India is what enamours you. I’ve spent a lot of my professional career filming in India, either on the back of my motorcycle or on my feet exploring nature.

You also feature in the Guinness Book of World Records.

The first TV show I made was called Tough Rides China for which I rode a motorbike across 1,800km over 60 days and we made a six-part TV show. We set a Guinness Record for the longest motorcycle trip in one country, without backtracking or overlapping.

Did you have the record in mind when you started?

No. But some people said: ‘Hey, you should get a Guinness record for your trip’. So when we contacted them, they asked for our hotel bills, credit card bills and GPS points as proof. They gave us an award which was an amazing achievement. When we started, we didn’t even know if we’d have a TV show. The record was a very nice bonus.

Pick a trekking destination for our readers.

Around Manali, there are a hundred treks you can do. One of the places I like to film in is Nepal. It is accessible — easy to get in and out. Nepal is touristy in some places and empty in others. You have to be selective about when and where you go. I haven’t been to Bhutan but I’d love to go. You have some of the greatest trekking trails around you because of the Himalayas. I also like trekking through the deserts. The feeling of emptiness and remoteness is the strongest in the desert.

What are the must-carry items for trekking?

There are two things you got to be careful about — the sun and water. You have to protect yourself from the sun, especially if you are up in high altitude. Not wearing a hat or sunglasses can ruin your trip, or even kill you if you get altitude sickness at high levels. Also you need to drink so much water when you are doing an expedition. If you get dehydrated, that also can kill you. If you can manage the sun and the water, you can explore anywhere in the world.