Advertisement
Home / Culture / Travel / Every experience at The Lake Palace, Udaipur, is worthy of a conversation

Every experience at The Lake Palace, Udaipur, is worthy of a conversation

Even Bond was both shaken and stirred, when he had one of these while filming Octopussy at five-star hotel 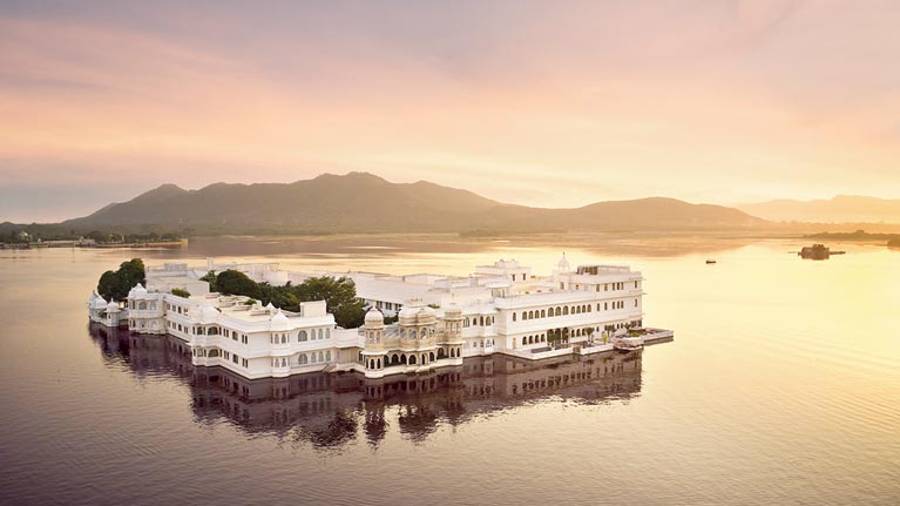 On October 23, 2021, The Taj celebrated its 50-year-old relationship with The Lake Palace, Udaipur. It has been a marriage made in heaven. But it has had its fair share of hellish moments.

According to writer Sharada Dwivedi, the hotel had a truckload of teething problems. “The ham had to be imported from canneries outside the state. The bar service was troublesome. Some vintages of wine would just not travel well. Erratic power supply was another hurdle. The air-conditioners would go out of order and had to be repaired by technicians that had to be ferried all the way from Mumbai. Mosquitoes were a menace.

There is an abundance of foie gras. There is a very effusive wine list. Eight pairs of marine cables under water supply power to the Palace. And even the splendid Wi-Fi makes its way through the placid waters of Lake Pichola. Fine fumigation has kept mosquitoes under careful check. They have, however, been replaced by a sonic attack by bats that fly past the palace every morning and evening with the discipline of an army. 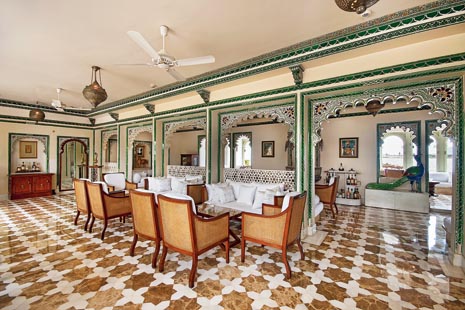 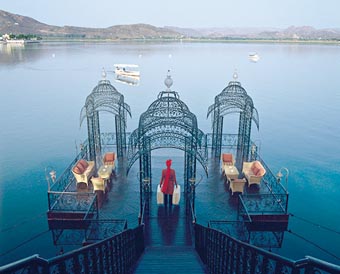 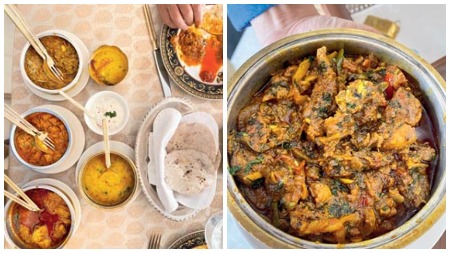 I came to Udaipur in search of street food, fragrances, Ayurvedic medicines and plant seeds. An ask that I thought was formidable. But there really is nothing formidable for Rahul Mehta, the fabulous front office manager of the hotel and arguably the most resourceful person that I have ever met in the hotel business. More about him, later.

My wife and I arrived in Udaipur around noonish and upon Rahul’s recommendation, stopped over at Chundawat Cold Corner where we had their celebrated Thokar Lassi — lassi topped with an overweight dollop of malai and a spot of Rooh Afza. It was magnificent.

Upon reaching the hotel, we were met by K. Mohanchandran, easily amongst the finest GMs of Taj Hotels. Mohan and I go back a long way. I know him from his days at Taj Bengal and Falaknuma Palace. He is the only hotelier that I follow on Instagram. His taste in all things tasteful is legendary. Be it what he drinks, eats, reads or watches.

Mohan met us at the pier and promptly dropped us into the capable hands of Rahul, chef Manish Joshi, a Marwari mixologist called Hemant Bagdi, who spoke impeccable Bangla, and a butler called Prem Singh, who has this unique ability to show up wherever you are.

Chef Joshi put together a grand lunch at their lovely restaurant, Neelkamal. I had exchanged messages with him on what we would like to eat.

There was a parade of pickles, all made in the hotel — mutton achar, chicken achar and an impossibly delicious garlic and red chilli chutney.

The main course was masterful as well: Dhungar Murg (a seductively smoky chicken), Sangri Dakh Khada Masala (local runner beans cooked in pounded whole spices), Chakki Ki Subzi (gluten dumplings steeped in a rich gravy of fried onion paste, condensed milk and yoghurt, and one that takes hours to make). All of this was accompanied with phulkas that were literally hauled over the coals and served and an interesting Kaleji Ka Raita (liver and yoghurt). After such a meal, escaping dinner was a foregone conclusion.

But the invitation from Hemant and the team at Amrit Sagar Bar could not be ignored.

The Amrit Sagar Bar is precisely located at the place where the erstwhile Diwan-E-Khas was. Clearly, that said a lot about its significance.

There are other things of significance there as well. There is the lethal Shahi Martini — a drink created with a royal heritage liqueur called Chandra Haas, feather honey, and lime juice. It is then topped with fresh soaked saffron. It is impossible to have more than one. Even Bond was both shaken and stirred, when he had one of these while filming Octopussy at The Lake Palace. The brutality of Hemant and the boys at the bar continued with the deceptively named Haldi Adrakhi Martini. It has been perfectly positioned as the best detox while you drink. Turmeric-infused vodka is paired with ginger juice, lime juice and sugar syrup. The turmeric is said to improve one’s memory. Yet two of these and you will have no recollection of the night. 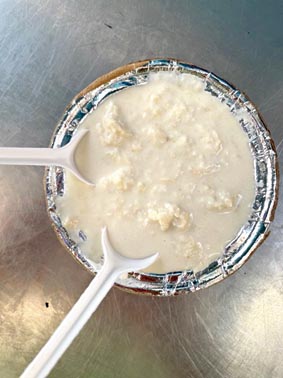 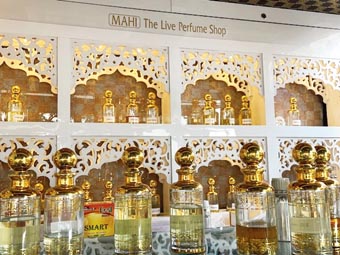 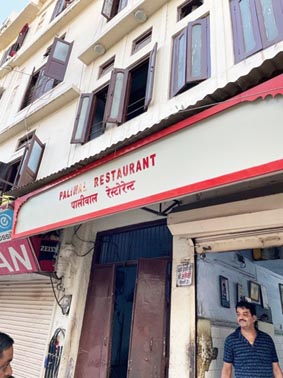 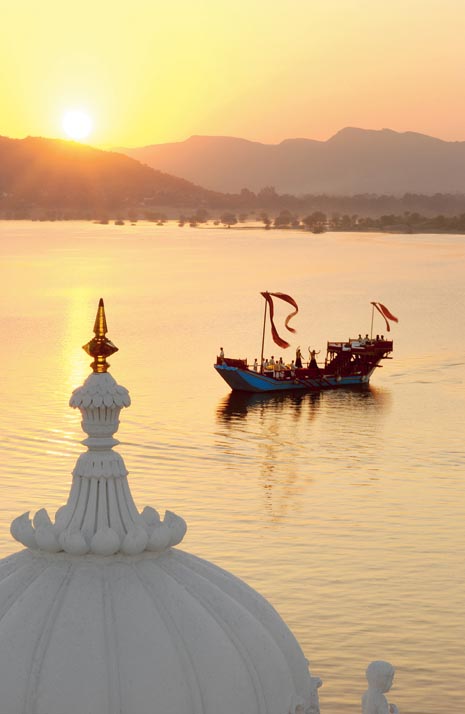 The next day was my day out on the streets of Udaipur with Ritika Das who heads sales and marketing for the hotel and is a fierce foodie herself. Our first stop was Paliwal’s, makers of delicious hing-stuffed kachoris with a spicy mint chutney. We followed that up with some lassis at Trivedi’s. And finally, some rich rabri at Raju Bhaiya’s. I was keen on the masala papad at Gayatri’s (basically a bread that looks and has the texture of a papad and is had with a masala aloo subzi) but it was strangely shut that morning.

Post a heavy breakfast, it was time to retire to our room, which really was a piece of history — The Sarva Ritu Vilas being the former Maharani’s room. It is an oasis of calm and is accentuated by a chandelier made from Waterford Crystal. Each facet of this chandelier captures the sun by the day and come night, the reflection of the moon on the lake. It is simply ethereal.

That afternoon, chef Joshi had several other aces up his sleeve: Millet Alu Tikkis, Machali Jaisamandi (fish from the largest lake in Mewar), Murg Kesar Kastoori, Rabodi Hara Pyaaz (sundried millet and buttermilk pancakes swimming in a gravy of condensed milk and yoghurt) and Thikri Ki Dal (split yellow lentils tempered with ginger and chillies and cooked in traditional earthenware).

Such massive meals have large-scale effects on the behaviour of buttons and the seams of one’s shirts. The palace has solutions for that as well. Ram runs a fantastic tailoring establishment within the hotel. He stitches together spiffy linen and cotton shirts and delivers within 24 hours.

We eat-walked into our last day at The Lake Palace. Rahul had two more acts to pull off.

He organised a mobile perfumery called Mahi to park itself across the lake. The speedboat ferried us to the mobile van that was manned by two enterprising and unfairly talented boys called Salahuddin Sakka and Mohammad Imran Khan. The two of them are masters at blending great fragrances and in the true spirit of olfactory jugaad they can also replicate any fragrance in the world and package it in nice 5ml vials. It is just what the doctor ordered.

And, of course, then there was the doctor itself — an Ayurvedic doctor who is quite a legend in Udaipur, Dr Omprakash Sharma. He is worth having a conversation with.

Every experience at The Lake Palace, Udaipur is worthy of a conversation but what left us speechless was our last meal in Udaipur; dinner aboard the legendary barge, The Royal Gangaur.

The Royal Gangaur is a 150-year-old barge painted in the royal colours of red and blue. It is rowed by six rowers. As the barge transported us across the pretty Pichola, Chef Manish unleashed his final and most fantastic salvo — Plum Tomato Buffalo Mozzarella Salad, Onion Reggiano Soup with Kashmiri Morels, Miso Glazed Black Cod, Lemon Linguine Prawns, Roasted Pumpkin and Goat Cheese Agnolotti. His final stroke of culinary genius was a tiramisu that rolled out of a cup. It was gastronomical genius.

On our last day, I happened to pick up an old brochure of The Lake Palace. It spelled out names of all the people who had stayed there. Queen Elizabeth was there during some renovations. Jackie Kennedy visited with her ritzy sister Lee Radziwill. John Profumo came with his actress wife, Valerie Hobson to repair his marriage after the very vocal Christine Keeler-induced “Profumo Scandal.” Roger Moore too was here.

It was time for us to leave. And much like a certain lady called Vivien Leigh who was also at Lake Palace, several years ago, we too were soon gone with the wind.

Swapan Seth works in brand building and advocacy. Collects art, books, music and thoughts. Lives in Naldhera in Himachal Pradesh. Chokes up in Gurgaon once a month to meet clients and bills. Write to him at swapanseth50@gmail.com