Advertisement
Home / Culture / Travel / Down under in Western Australia

Down under in Western Australia 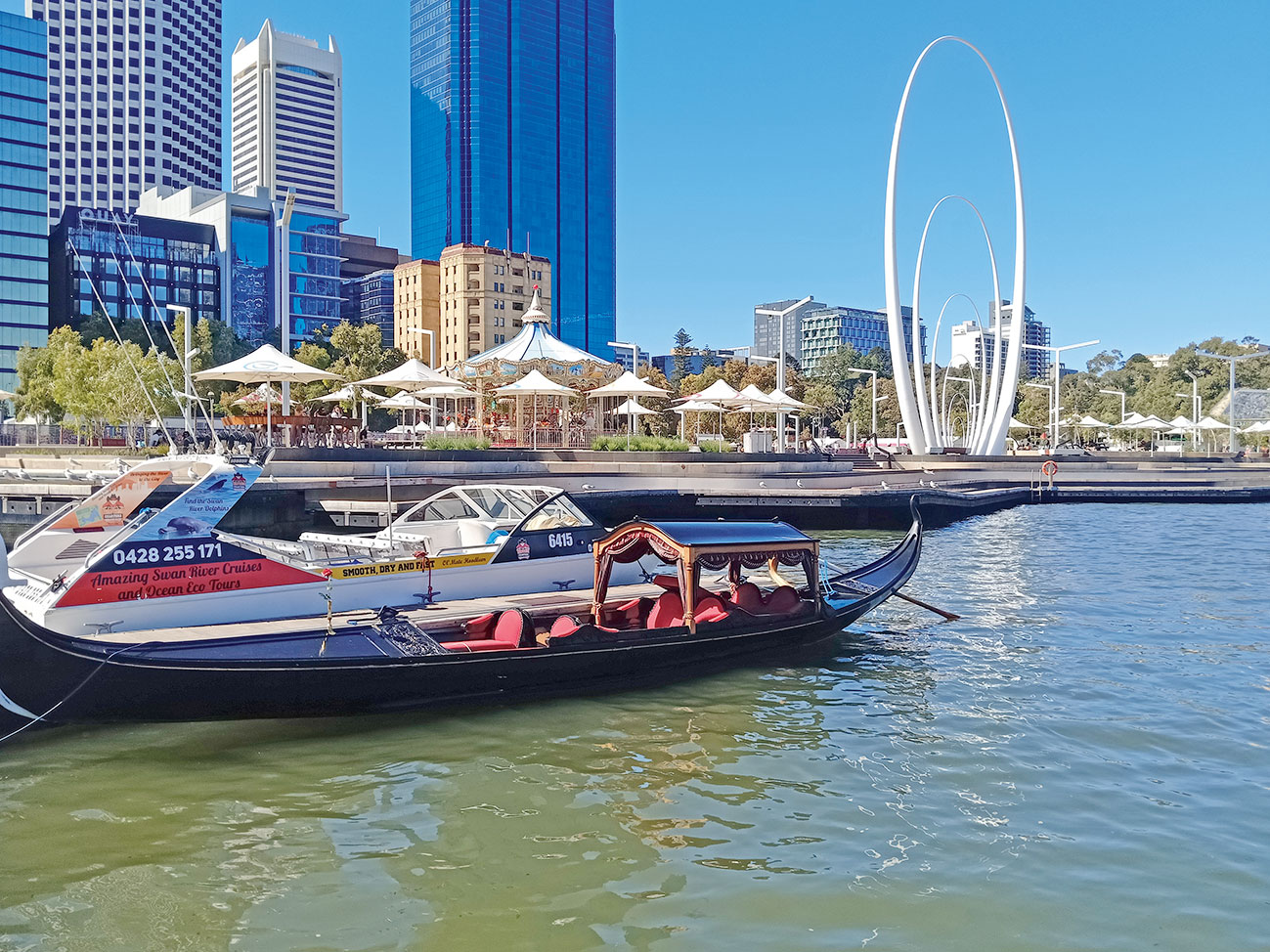 Perth is the sunniest city in Australia
Pictures by the author and courtesy Tourism Western Australia
Priyanka Roy   |   Published 06.07.19, 01:36 PM

Think Australia, think Sydney, Melbourne, Brisbane or even Adelaide. However, it’s Perth with its gateway to spectacular Western Australia that’s been attracting a lot of tourists, especially from India, given it’s the closest Australian city to the country from Singapore. Western Australia has the unique distinction of having it all — exotic wine country, expansive beaches, gorgeous sand dunes and glorious deserts. t2oS experienced the best of the length and breadth of Western Australia on a recent

15-day trip and here’s what we recommend should make it to the list for your next visit Down Under.

There’s so much to do outside of Perth that one may neglect visiting some of the must-sees within the city. Home to some landmark public and restored historical buildings, Perth offers great nightlife and plenty to choose from its ever-burgeoning sip-and-bite scene. It also has glorious sights — Perth is the sunniest city in Australia — and you would do well to sign up for a cruise down the sparkling Swan River, giving you a chance to not only spot the Swan River Bridge — a kind of an architectural marvel with two swans meeting — but also the famous WACA stadium. I was treated to an hour-long cruise on a pristine afternoon with the friendly boatman entertaining us with a performance on the indigenous musical instrument didgeridoo. I also recommend half a day trawling through Kings Park, overlooking Swan River and home to some rare plant species. It’s the most popular visitor destination in Western Australia, being visited by over five million people each year.

Towering murals to micro art, the streets of Perth are home to some magnificent art, each of which has a story to tell. You can either choose to spend a day walking around and discovering them on your own or sign up for one of the many street art tours available. Great for selfies!

The biggest attraction at Lancelin, besides dune bashing, is sandboarding
Pictures by the author and courtesy Tourism Western Australia

A few kilometres from the start of the Indian Ocean drive and about an hour’s drive north of Perth will take you to the Lancelin sand dunes. A visual delight — I loved the way the pristine white sands met the sparkling green ocean and the cloudless blue skies — the biggest attraction at Lancelin, besides dune bashing, is sandboarding. Once I finished clicking a million pictures of the sights around me, I caught hold of a sandboard and got to work. The actual stuff — positioning oneself strategically on the sandboard and rappelling down a sand dune isn’t that tough — but what will knock the wind out of you is walking up the dune, sandboard in hand, especially if you are trudging against the wind. Once you make it to the top, the view is mesmerising and there’s no bigger high than making that almost-perfect rappel down a slope. Too much fun!

Said to be unknown to most Australians until 1967 when the area was gazetted as a reserve, the Pinnacles can easily be branded as one of the wonders of the world
Pictures by the author and courtesy Tourism Western Australia

Any Western Australia itinerary is incomplete without a trip to the Pinnacles Desert. About a two-hour drive from Perth and located within the Nambung National Park close to the fishing town of Cervantes, the Pinnacles is unlike anything you would have seen. Aptly described as ‘otherworldly’, what greets you as you drive through the golden-hued desert is row after row of naturally created limestone formations, each unique in its shape and with the tallest reaching as high as 3.5m above its yellow sand base. Said to be unknown to most Australians until 1967 when the area was gazetted as a reserve, the Pinnacles can easily be branded as one of the wonders of the world, with each of the formations being unique enough to compel you to trawl through quite a bit of the 32sqkm desert (to make things easier, there are several vantage points to feast your eyes on the vast expanse). The Pinnacles pose a quandary, albeit happy, to the everyday tourist — do you simply stare at the wondrous formations in front of you and take it all in, or do you get click-happy with your camera? I did a bit of both.

Pop over to the Fremantle Markets for some quick shopping. Some really great bargains there!
Pictures by the author and courtesy Tourism Western Australia

An hour from Perth, Fremantle is a quaint little town that marries the best of the vintage and the modern. A port city located at the mouth of the Swan River, Fremantle has well-preserved 19th century buildings — hop over for to the Fremantle Prison or the Round House, which is the oldest public building in western Australia, for a spot of history — as well as some less-celebrated eating places that churn out the best meals using indigenous Australian produce. The highlight for me in Fremantle — besides a two-night stay at the beautifully restored heritage haunt. The National Hotel — was a walking tour of the city where I discovered some hole-in-the-wall places dishing out some of the best cheese and chocolate I’ve ever had. A strong reco: pop over to the Fremantle Markets for some quick shopping. Some really great bargains there!

Located on the edge of Lake Beedelup and surrounded by dense forests, the resort is nowhere close to civilisation
Pictures by the author and courtesy Tourism Western Australia

My fortnight in Australia saw me spending nights in as many as seven hotels and villas, but none more memorable than the Karri Valley Resort in Pemberton. Located on the edge of Lake Beedelup and surrounded by dense forests, the resort is nowhere close to civilisation, which suited me just fine. It’s so quiet here — save for the quacking ducks that swim by every now and then beneath your feet (yes, the rooms are right on the lake!) — that you can almost hear yourself breathe. Cell phones don’t work for miles out here and the peaceful calm at Karri — named after the famous native tree of the region — needs to be experienced to be believed. I spent just one night here, but a few more would have been more than welcome. The happy bonus? If you are lucky, you can spot herds of kangaroos bouncing around!

The Cape-to-Cape track is the longest coastal walk in Australia, and the view — coastal scenery, sheltered forests and pristine beaches — will make the trek well worth the time and energy spent
Pictures by the author and courtesy Tourism Western Australia

Fighting fit and love a good walk? Then the Cape-to-Cape Track Walk is a must when in WA. I must admit that I am not the fittest around and the prospect of a 135km walk did scare the hell out of me, but I gamely opted for it when told I would be doing the bare minimum. Well, a 5km walk at 7am on a cloudy morning, with the sun and showers both playing peek-a-boo, isn’t all that bad I thought to myself and once there, I simply loved it. Spanning Australia’s southwest edge from Cape Leeuwin to Cape Naturaliste, the Cape-to-Cape track is the longest coastal walk in Australia, and the view — coastal scenery, sheltered forests and pristine beaches — will make the trek well worth the time and energy spent. The Track itself is a combination of different types of terrain — smooth, wide roads to narrow rocky paths, soft sandy beaches to a few rough scrambles — and I had rain to contend with too. But once you get past the initial hiccups — and take a dip in the almost-transparent waters of the ocean on the way, it’s an experience well putting into — and ticking off — your bucket list. The healthy lunchbox, filled with some delicious nibbles, was an added incentive!

A simple yet immersive art installation by Bruce Munro, Field of Light
Pictures by the author and courtesy Tourism Western Australia

One of the most emotional experiences of my Australia trip came courtesy an evening spent at the Field of Light: Avenue of Honour in Mt Clarence in Albany. A simple yet immersive art installation by Bruce Munro, Field of Light comprises endless strings of colourful lights, predominantly green, lined across a field. The view is so spectacular that one can’t put it into words, especially on a full moon night, but equally poignant is its backstory, with the installation illuminating the Avenue of Honour at Mt Clarence in homage to the Anzacs who departed from Albany for the Great War.

When in WA, a visit to the second-longest wooden jetty in the world is a must
Pictures by the author and courtesy Tourism Western Australia

When in WA, a visit to the second-longest wooden jetty in the world is a must. At approximately 1,840m, the Busselton Jetty is a picturesque wonder. The best way to take in the sights of Busselton Jetty is to hop on to the ferry train that takes you on a 1.7km ride across the calm, clear waters of Geographe Bay. The ride takes one to the Underwater Observatory and Marine Sanctuary — one of only six natural aquariums in the world — where you will get to see some rare species of marine life. While at the Jetty, one can sign up for sunset tours, an underwater dining experience and yes, even a mermaid tour!