Bending the elbow in Philadelphia to glug beer made from recipes by George Washington, Thomas Jefferson and Benjamin Franklin 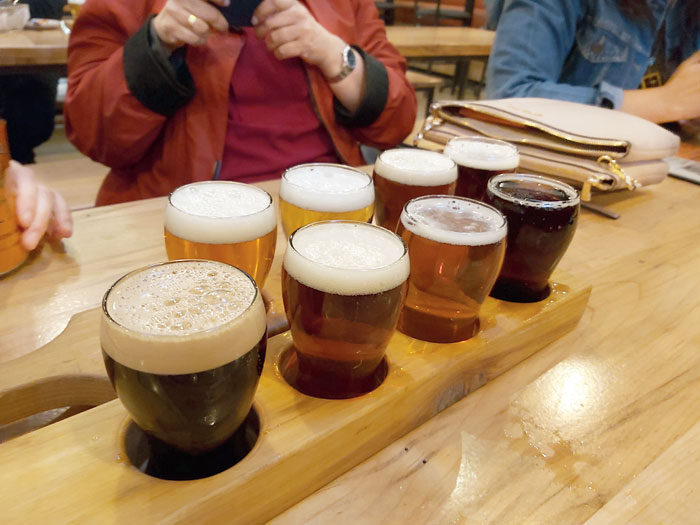 Enjoying Ales of the Revolution, one not just gets to relive history, it’s about appreciating what beers are about — an unpretentious beverage that needs to be had with unpretentious people
Picture: The Telegraph
Mathures Paul   |   Published 10.08.19, 01:22 PM

In 1757, a colonel in the Virginia Regiment militia wrote a recipe for “small beer” on the final page of one of his notebooks. The thirst quencher contained some water, hops and molasses. And this colonel was no ordinary person… he was the first president of the United States — George Washington. Even though the original notebook rests in the collections of The New York Public Library, the recipe continues to flow into the mugs of people at the heart of Philadelphia — a city that played an instrumental role in the American Revolution as a meeting place for the Founding Fathers of the United States — at Yards Brewing Company, which specialises in ales, particularly those in the English tradition.

At this brewery, Washington is joined by America’s third president Thomas Jefferson and one of the other founding fathers of the nation — Benjamin Franklin, who was also a brilliant scientist and inventor. Beer recipes from these three iconic figures from American history are sold here round the year under the title Ales of the Revolution. Enjoying these beers one not just gets to relive history, it’s about appreciating what beers are about — an unpretentious beverage that needs to be had with unpretentious people. At Yards, beer has an un-snobby quality to it. No wonder it has been one of the country’s most-loved breweries since 1994. And no wonder, it dares to take competition to the big, “industrial” players. 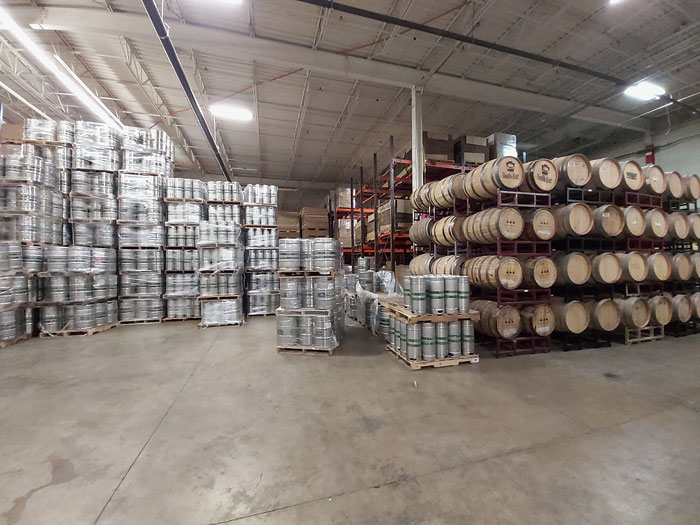 Kegs and barrels are in plenty at Yards Brewing Company
Picture: The Telegraph
Advertisement

The founders of the brewery — Tom Kehoe and Jon Bovit — liked the idea of hardworking people in a hardworking town having a hardworking beer. They wanted to create the feeling of a shipyard or a lumberyard but they didn’t know what to call it. For two years their friends called it “something-yard”. The word ‘yard’ stuck on and it simply became Yards. Everybody wants an origin story that has fire and romance but this one is a simple one. It’s very indicative of Philadelphia — a hardworking community where people help one another. Soon after, Bovit left, leaving Kehoe to move from one milestone to another. He’s a hands-on guy who visits the brewery every day and continues to be the head brewer.

Just five blocks from Liberty Bell, Yards should be a must-stop on one’s itinerary if beer is on the mind (hopefully not overflowing the belly!). And if you are expecting a lot of equipment when it comes to processing of the beverage, the place sets the records straight. All the ingredients are mixed together and there is a machine to filter out the yeast, following which the product is put in a holding container from where it is put into bottles, kegs or cans. The cooling stage is very important.

Machines chill the beer down to as much as 27oF or around -3oC. Beer freezes at a lower temperature than water and as long as it keeps moving, the water in it won’t freeze. Once the beer is ready, it goes into the cooler, which is a temperature-controlled environment. Since most people want to drink beer cold, at Yards beer is put into kegs and is sent through what looks like a mini carwash, only to come out the other side cold and ready to drink.

Yards does around 50,000 barrels a year (a barrel is 31 gallons). They have the capacity to do around 300,000 barrels or 600,000 kegs in a year. A few college students wanted to know how quickly they could drink the beer Yards made. If one drinks six beers each day, it would take over 32 years to go through one of the fermenting machines, which handles 200 barrels or 400 kegs. And in none of the products one can find rice, corn or genetically-modified ingredients. Yards, in fact, is an example of a brewery that’s cutting into the bottomline of a corporate brand. To offer perspective, most big international beer maker would sell 9,000 for every one keg Yards sells. The big breweries make enough beer to fill any stadium in the world and turn it into a lake and they can do it every day. But here, quality is guaranteed.

The other big achievement of Yards is that it makes three beers from the US founding fathers year round. These are beers bereft of bubbles and stored in firkins. Anybody is allowed to create the beers associated with George Washington, Thomas Jefferson or Benjamin Franklin but these are the guys who probably do it the best. They also make English and European beers using American ingredients, exactly like how the forefathers may have done.

People come to Philadelphia to see American history and Yards is trying to preserve the same in a different way. Though huge, it’s still an intimate place… much like a mom-and-pop company where everyone knows everyone. And this is a great representation of a city. The company could have moved to New Jersey to earn many more millions of dollars but the dream was to be a Philadelphia brewery and the founder stuck to his dream. 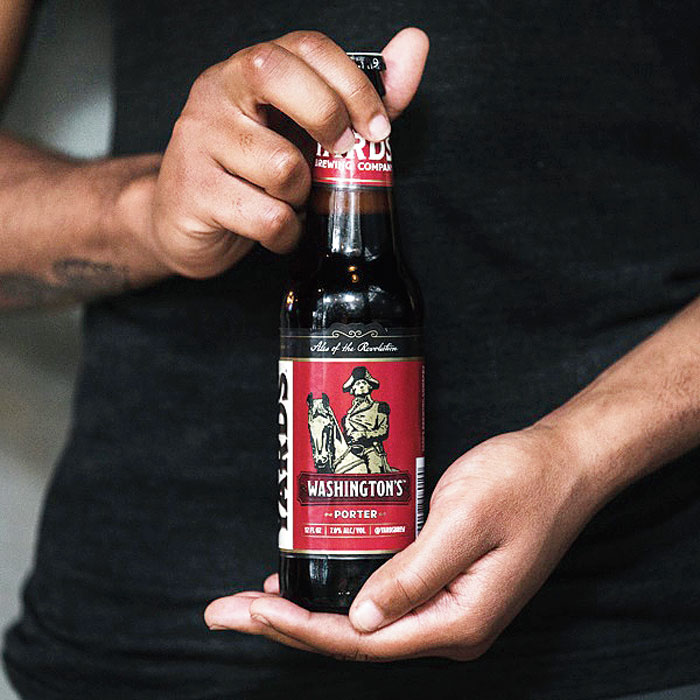 The first US president’s formula for this brew was found at The New York Public Library. Washington wrote in his notebook: “Take a large Sifter full of Bran Hops to your Taste — Boil these 3 hours. Then strain out 30 Gall. into a Cooler put in 3 Gallons Molasses while the Beer is scalding hot or rather drain the molasses into the Cooler. Strain the Beer on it while boiling hot let this stand til it is little more than Blood warm. Then put in a quart of Yeast if the weather is very cold cover it over with a Blanket. Let it work in the Cooler 24 hours then put it into the Cask. leave the Bung open til it is almost done working — Bottle it that day Week it was Brewed.” 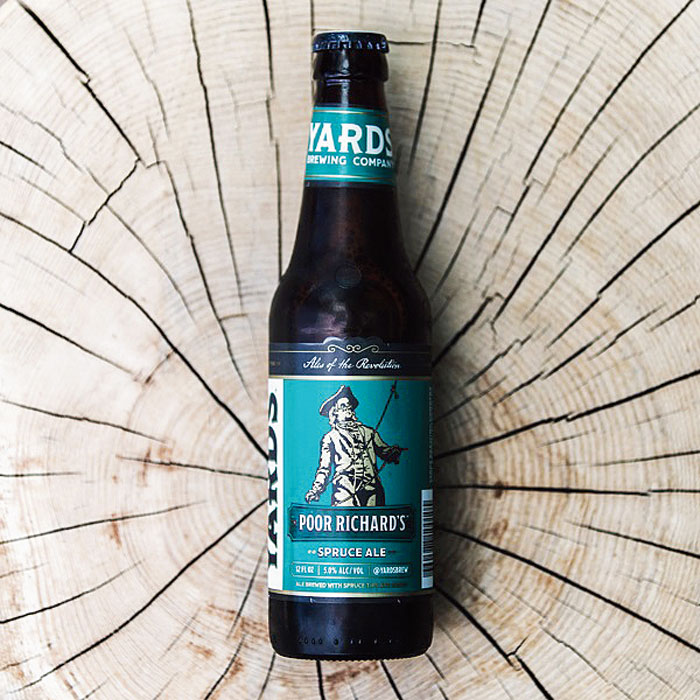 Based on Benjamin Franklin’s original recipe, this one-of-a-kind deep amber ale calls for barley, molasses and essence of spruce. It was great for warding off scurvy as spruce is high in vitamin C. 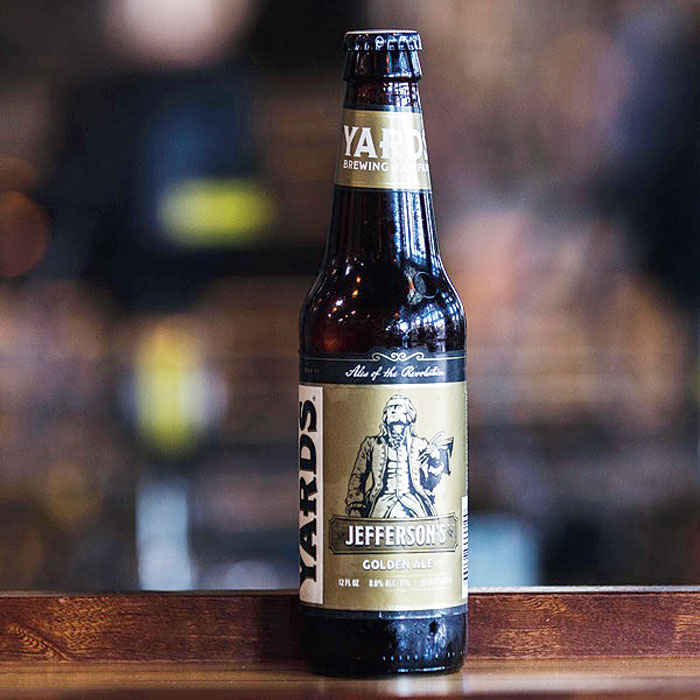 Yards recreated his recipe, employing honey, rye and wheat, just like the beer brewed at Monticello during Thomas Jefferson’s time. But it’s said that his version had almost 13 per cent!