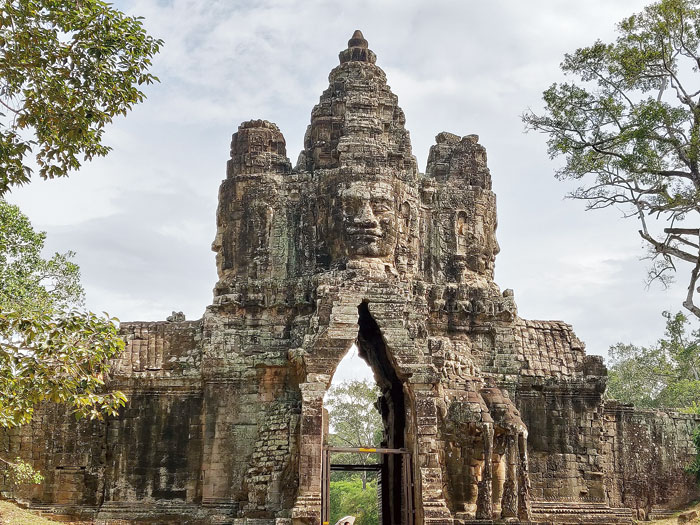 If you think of Cambodia, what is it that comes to your mind first? Some would say the Angelina Jolie-starrer movie Lara Croft: Tomb Raider, others would think of the world-famous Angkor Wat temple, while still others might think of the amazing Khmer cuisine.

Recently, The Telegraph had the chance to go on a Cambodian adventure with an invitation from the Tourism Authority of Thailand (TAT) and Bangkok Airways for the Association of Southeast Asian Nations (Asean) Fam 2019. It was a trip where we found out about all of the above and more. Read on.

We flew to Siem Reap in Cambodia from Bangkok in a comfortable Bangkok Airways flight that reached around noon. Indians get a visa on arrival in Cambodia, but you have to make sure that you have $30 on you to pay the visa fee as there’s no currency exchange before you cross immigration.

Once out of the airport, our Cambodian tour guide Sopal took us to an Indian restaurant named Curry Walla for lunch. We had started the day early in the morning and were very hungry. If you’re in Cambodia and craving for some home food, this place on Sivutha Street will come to your rescue.

Our hotel, Sokha Angkor Resort, a beautiful five-star luxury property, was a stone’s throw from Pub Street, where most of the action is. After freshening up, we were ready to explore the city! We started off by visiting the Artisans Angkor, a Cambodian social business started in the 1990s to revive traditional Khmer craftsmanship like stone and wood carving, painting on statues and on silk, lacquering, and silver plating. A social objective was to create jobs for young Cambodians in rural areas.

At the workshop, we saw artisans hard at work weaving silk and carving sandstone. If you’re here, do check out the museum store to shop for beautiful silk dresses, scarves or home decor items like paintings, cushion covers or tableware.

Next, it was time to hit the party place — Pub Street! It has crazy energy, great vibe, good music, cheap beer and awesome food. If you’ve been to Phuket’s Bangla Road, this is a lot more toned-down version of that, but still a lot of fun. I sat at a small pub called The Red Piano and watched the sunset while sipping on a mug of beer for $1.25 (about Rs 90)!

The district is also full of souvenir shops, so keep bargaining and buy T-shirts, pants and fridge magnets in bulk for your family back home. If you’re carrying US dollars with you, you’d be sorted in most places in Cambodia. If not, the alternatives are Thai baht or the local Cambodian riel.

For dinner, we went to a cute little vegan restaurant called Vibe, that seems to be a favourite with Europeans. Vegan food is slowly gaining popularity all around the world and this place is proof. I opted for a Raw Zucchini Pasta that turned out to be surprisingly yummy and a cold-pressed organic drink called Liquid Gold that comprised orange, pineapple, carrots, turmeric and aloe vera. We went back to our hotel to retire a little early as the next day was supposed to be the big one!

I was bursting with energy early in the morning at the prospect of finally getting to see the beauty that is Angkor Wat. I’ve heard so much about it and I was finally reaching there. After a hearty breakfast at our hotel that comprised baked beans, bread and bacon, were ready for Angkor Wat.

Construction of the temple (wat means temple) started in the early 12th century and, today, it is considered an architectural masterpiece that’s also a UNESCO World Heritage site. The prime attraction for visitors to Cambodia is the Angkor Wat temple complex, which is one of the largest religious monuments in the world.

It has become a symbol of Cambodia and even appears on its national flag. The best time to explore it is either during sunrise or during sunset. It’s a huge temple complex and if you want to take your own time to explore every nook and corner, then an entire weekend would be ideal. Angkor Wat was initially a Hindu temple dedicated to Lord Vishnu that gradually turned into a Buddhist place of worship later and continues being one till date.

The illustrations etched on the walls show the huge Indian influences they had — there are intricate tales from the Ramayana and Mahabharata beautifully drawn. It also has a lion statue at the entrance and, according to Hindu myth, Brahma had placed a lion at the doorway of his palace as its guardian. You’d be awed to discover how much of Indian influence is scattered around and the impact we have had on Cambodian history.

We had lunch at a restaurant called Blue Pumpkin. If you’re in Cambodia, you absolutely must try the Beef Lok Lak, a traditional Cambodian dish. I am not a big eater, but I finished that entire dish for lunch, it was so delicious. It’s a must-eat.

The next stop was Angkor Thom, a royal city that was built in the late 12th century. The richly-decorated Bayon is the most important temple there. The city can be accessed through five gates, of which the Victory Gate is on the eastern wall. I was mesmerised as I walked around taking it all in.

The next stop was the temple Ta Prohm within the Angkor Archaeological Park, that was originally known as Rajavihara (monastery of the king). Unlike most temples in Angkor, Ta Prohm is pretty much in the same condition in which it was found — it’s a combination of photogenic and atmospheric with trees growing out of the ruins.

Loeung Sovann, who has been a tourist guide for 20 years, told me that tourism in Cambodia was greatly boosted after the release of Lara Croft: Tomb Raider, which was shot in Ta Prohm. He claimed to have helped the crew as a local, with transport and production, during the movie’s shoot and, apparently, also clicked a picture with Angelina Jolie that he seems to have misplaced.

We saw the iconic banyan tree at the Ta Prohm temple that had featured in the movie, where Angelina Jolie’s Lara Croft picked a jasmine flower and fell down! The maze-like corridors, the roots of the trees and every corner smelling of history, Ta Prohm is a must-visit alongside the more famous Angkor Wat and Angkor Thom.

It was a long, tiring albeit fulfilling day. We needed to unwind at Pub Street! We had dinner at another Indian restaurant called Bukhara. The Mutton Roganjosh was as good as any restaurant back in India and it was a pretty lip-smacking way to end the day.

We were supposed to leave for India the next day, but not before paying a visit to the Tonle Sap Lake. The largest freshwater lake in Southeast Asia is a bio-diversity hotspot. It was designated a UNESCO biosphere reserve in 1997 and we took a small cruise to explore the waters. There were people living in boat houses and going about their daily activities. There was a floating church, a floating restaurant and even a school where I saw small children playing inside! It was like nothing I’ve ever seen in my life.

We stopped at a community alligator farm and before we could enter, we saw a small kid with a python around his neck. If you wanted a picture with the snake or touch it, you had to pay. I was too scared to even go near it but clicked the picture of the child from a distance. There were various caged animals — including alligators — right beneath our feet! There were several souvenirs made of crocodile skin being sold. I was surprised to know that Tonle Sap is home to around 1.2 million people who make their living by fishing in and around the lake.

We went back to the city to have lunch and leave for the airport. Our trip had come to an end but we were going back home with a ton of memories. Siem Reap in Cambodia is a treasure trove of history, so put visiting Angkor Wat in your bucket list today, if you haven’t already!