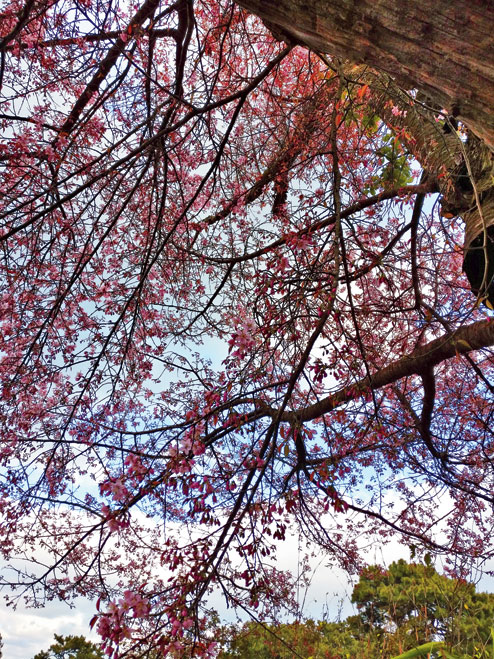 In 2015, when all three of us turned 40, we made a pact amongst ourselves. No matter how busy our lives were, each year, we would take three to four days off to take a holiday together. Just the three of us childhood school friends: sans worldly worries and deadlines, to cherish the silliest of memories of yore and to create yet some more.

In 2015, our maiden trip took us to Bhutan, where we all climbed to the Tiger’s Nest and crooned till late at the only karaoke bar in Paro. In 2016, we headed to Goa in the rains and indulged ourselves like one only can in Goa. And in 2017, after one round of cancelled plans, we finally made our sojourn happen in November. Lured by the annual Cherry Blossom Festival, we decided to go to ‘The Scotland of the East’ — Shillong.

Instead of flying to Shillong, we decided to fly to Guwahati and drive up the next 100-odd km. Within an hour or so of driving from Guwahati airport, the landscape changed and seemed to be getting better by the minute. The roads acquired gentle curves and the air became crisp.

After a two-hour-plus drive, we stopped to stretch and click against the Umiam lake, also known as Barapani. It’s a
large man-made water body. The blue waters of the lake, surrounded by pine trees, stretched far into the horizon, making it a picturesque sight.

Another half an hour later, we found ourselves in the heart of Shillong and with a little help from GPS wound our way to our homestay. Instead of opting to stay at a modern ‘property’, we had chosen the quaint and green Aerodene Cottage that welcomed us with the sign ‘No horn please — Rs 500 fine.’ I liked it immediately!

A heritage building dating back to 1950, the Aerodene Cottage was the family home of the last chief secretary of undivided Assam and Meghalaya, Dharmananda Das. After years of decline, it was brought back to life and lovingly given a makeover by two friends — Sharlene Das and Rukma Sen, who hailed from Shillong and cherished the idea of conserving their ancestral heritage. We were allotted two adjoining rooms with a lovely common sit-out, full of creepers, potted plants and wicker chairs.

After a languorous lunch of steaming thukpa and momos at Cafe Shillong, we decided to proceed to Ward’s Lake to see some cherry blossoms. The lake, which was festooned with strings of pink and white lamps, was teeming with locals and tourists who were making the most of boat rides and pop-up cafes selling waffles, popcorn and candyfloss.

The gaiety was backdropped by undulating ample gardens and blossoming cherry trees. After catching the sunset at Ward’s, we paid a brief visit to the Polo Grounds where there was live music and loads of local fare to sample.

One of the moments I wait for anytime I’m away from the city grind is when night begins to fall and the stars come peeping out. By dinner time, the air was chilly, the inky blue sky was studded with stars and our hearts were full of gratitude. Only the crackling of the bonfire and fluttering fireflies broke the silence and brought the day to a close.

After breakfast in the charming garden of Aerodene, dotted by shrubs, orchids, poinsettias, ladies’ slippers and a dutiful scarecrow guarding a vegetable patch, we left Shillong to drive up to Cherrapunjee.

Driving past villages, green pastures and waterfalls, we took in the mesmerising beauty of Meghalaya as soft clouds floated in through a clear blue, sunny sky. En route, we halted at Maggi Point, a viewpoint that is also a popular pit stop. Right at the edge of the road at a vantage point sat rows of women selling fresh fruits and vegetables like cucumber, pineapples, radish, kiwis and corn.

Across the road, tables were laid out for a hot serving of Maggi or a plate of steaming momos, tea and coffee. What was even more delightful was that the area did not have even a speck of garbage anywhere and proudly boasted of being a ‘Zero Litter Zone.’

After fortifying ourselves, we walked around for a bit and chanced upon a board that invited us to dress up in traditional Khasi attire and get photographed. A room displayed bright yellow, red and black robes, glittering trinkets and a hand mirror. In his masterpiece, Kanchenjungha, Satyajit Ray had shown how we tend to embrace possibilities when surrounded by nature and pull out of the usual drill. I suppose we were under the same spell, for, in a jiffy, the friendly lady had managed to drape each of us in colourful robes and her assistant had clicked pictures of the multi-coloured trio against the green valley!

Later in the day, we ventured into the Mawsmai Caves situated about 6km from Cherrapunjee. We felt our way through dark corridors of limestone stalactites and stalagmites only to be reassured by the light at the end of the tunnel. The sun had just set and it was time for us to start driving back to civilisation.

Back in Shillong, we decided to walk to the nearby Dylan’s Cafe, themed around the singer-songwriter, where, over dinner, I was taught how to play Jenga.

On our final day, we decided that we couldn’t let our sojourn come to an end sans some shopping. So after a sumptuous lunch at the quiet and majestic Tripura Castle, which was flush with cherry blossom and offered us a bird’s eye view of the town, we decided to hit the hustle and bustle of the Police Bazar area in Shillong one last time. Within an hour, we had haggled our way to bags full of blankets, shawls and shoes and were just in time to head back to Guwahati for our flights back home.

We don’t have the faintest idea as to where we shall land up as a trio in 2018. But we’re sure we’ll land up somewhere... and that’s enough.

The author is a communications professional