Last year, India was the sixth largest market for Alsace 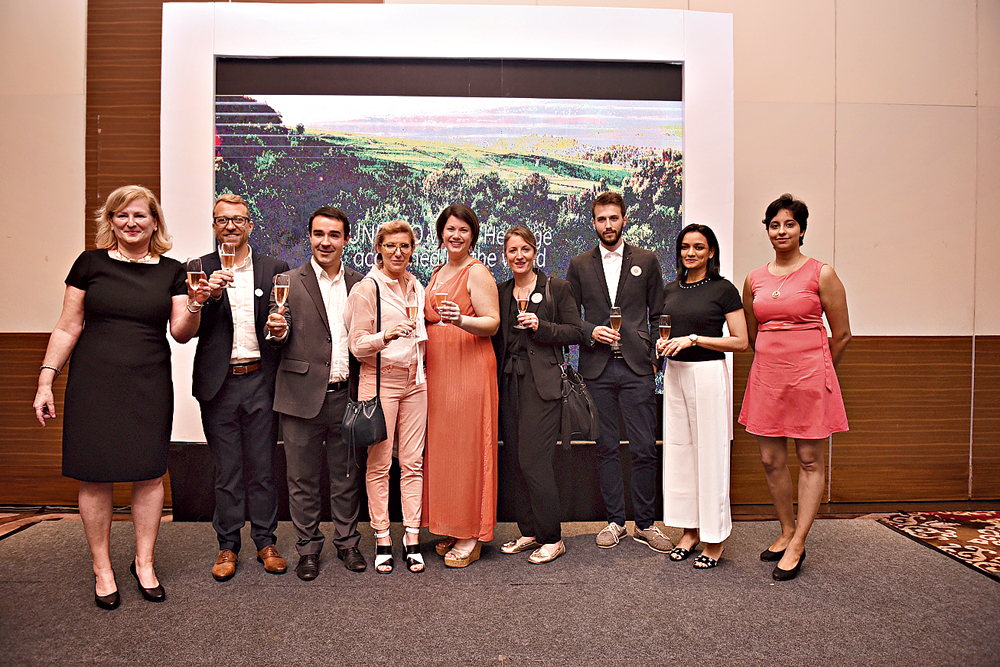 Champagne was served not just in flutes but in an audio-visual presentation by the first official delegation from the wine-growing province of northeast France to visit Calcutta. A team comprising tourism board representatives and champagne producers from Champagne and Alsace popped chilled bubbly and gave the gathering a taste of wine tourism at an event organised by the consulate general of France at Swissotel.

“With more and more Indians going to France, the idea is to showcase regions of France other than Paris and the French Riviera, which are extremely popular. That’s why we have got professionals from the region to interact with tourism professionals,” said French consul general Virginie Corteval.

Last year, India was the sixth largest market for Alsace, revealed Alexandre Willmann, senior tourism promotion manager of the Agence Regionale du Tourisme Grand-Est. “As per 2018 figures, India contributes 17,000 overnights to our local tourism, which is just 300 less than Canada. Given India was at 7,000 overnights in 2015 when country-wise data first started to get compiled, tourism from India has grown 2.5 times in less than five years,” he said.

Alsace, on the bank of the river Rhine, is bordered by Germany and Switzerland. “We are right in the middle of Europe. Our capital Strasbourg is also the capital of the European Union. The airports of Zurich and Frankfurt are just an hour-and-half away,” Willman added.

In the context of wine tourism, it is the city of Colmar in Alsace that makes it to the travellers’ map. The birthplace of the Statue of Liberty sculptor Frederic Bartholdi is the capital of Alsatian wine. “We produce 200 million bottles a year, of which 90 per cent is white wine from Riesling and Gewurztraminer grapes. The rest is Pinot Noir,” said Willman.

About 225km away from Alsace is Champagne-Ardenne, on the Belgium border. The audio-visual presentation showed how in 2015 the Champagne hillsides, houses and cellars — encompassing the sites where the method of producing sparkling wines was developed since the early 17th century to the 19th century — were declared a Unesco World Heritage Site.

From the Champagne region, officials had come from both Reims and Epernay. “Reims is 45 minutes away from Paris, so we get a lot of day-trippers. Our challenge is to show them that there is more here that merits a longer stay,” smiled Romain Tilly, marketing officer of Champagne-Ardenne Tourisme.

If Reims is the unofficial capital of the Champagne region, Epernay, just 27km away, is the official one. “If you visit in May-June, the colour of the vineyards will be green. In September-October, in the harvesting season, it changes to orange and yellow,” said Marine Cochard, resident counsellor in charge of the commercial and development centre at the Epernay tourism office.

A tourist magnet is the Avenue de Champagne where famous champagne producers like Moet & Chandon, Mercier and De Castellane are located. “There are close to 5,000 champagne houses in Epernay,” said Tilly.

Many of the houses offer boarding and tour facilities on their estates. “We pick up tourists at the station. The train from Paris takes an hour and 15 minutes. Bed and breakfast are offered in my house on the Avenue de Champagne. Our vineyard is 10km away. Epernay is, in fact, surrounded by vineyards. One can travel east to Marne Valley where chardonnay, pinot noir and pinot meunier grapes are grown or north to the pinot noir vineyards in the Montagne de Reims. The best time to come is April to November,” smiled Sophie Signolle-Gonet, of the house of Champagne Michel Gonet, the seventh generation running the family business since 1802.

Champagne is obviously cheaper in Champagne than anywhere else. Even then, a bottle is popped only on special occasions. Jim Vitoux, promotion and press officer of the Tourism Office of Grand Reims, drank his first glass on reaching 16, though he had taken a sip or two before. “Our family buys from a little wine grower in the village. We get it at factory price. It is more expensive in restaurants,” he said.

The house of Leclerc Briant has a distinction, announced the sixth member of the delegation, Emmanuelle Vautrain. “We are the only ones in the region allowed to mix white and red wine to produce rose. Ours is a mix of 95 per cent chardonnay and five per cent pinot noir,” said the company’s hospitality manager.

As the giant screen showcased the breathtaking natural beauty of the Champagne valley, guests took sips of contentment of Brut Rose from the 2016 harvest of Leclerc Briant and white wine from Michel Gonet’s 2005 vintage.

The only news that left a sour taste in the mouth? In response to a parting question from The Telegraph, the delegates admitted that climate change was indeed having an effect on the vineyards. “Maturation of grapes is happening faster. My father used to say that once the grapes flower in June one has to count 100 to arrive at the date when they can be picked. But the winters are not so cold any more. These days the grapes are ready 10-12 days earlier than before,” signed off Signolle-Gonet.