To war, in step

A dance form that has broken gender and caste formats 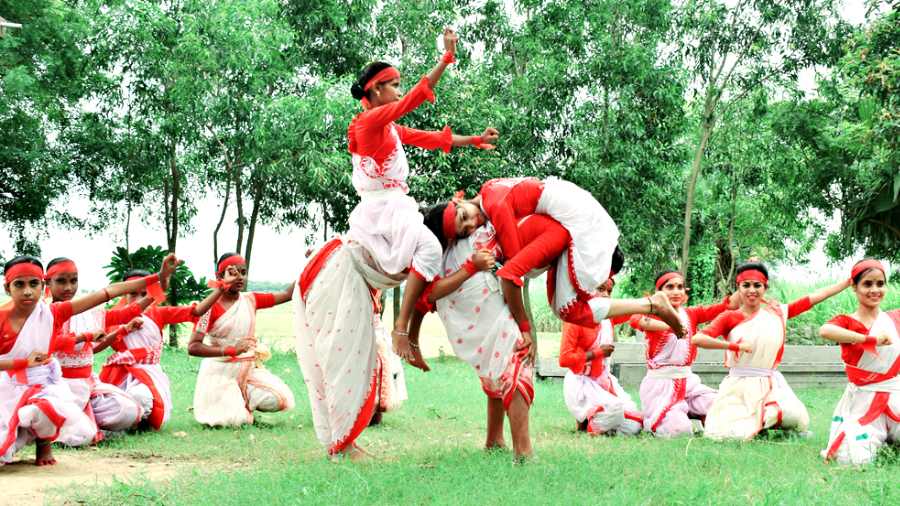 GALLANT GIRLS: Raibeshe, known to be a virile war dance, being performed at Gonnaserandi Gopoteswar Mandir in Burdwan.
Photograph by Monotosh Ghosh
Moumita Chaudhuri   |   Published 18.09.22, 04:00 AM

Saheli Majhi is known in Gonnaserandi village in Bengal’s East Burdwan district as a Raibeshe dancer. “Raibeshe is not for girls, I had been told,” she tells The Telegraph. Nevertheless, a year ago, she started learning it.

Like her, there were other girls in the village — Dipa Hazra, Tithi Mondal, Sumona Sardar, Rishita Majhi, Purabi Pal, Jaba Majhi, Suparna Sutradhar — who are picking up the age-old folk tradition.

There are 13 of them in the 40-member dance troupe of Pradip Kumar Pal and Subrata Mukherjee. The troupe is called Ujan, which means against the current.

The troupe was born in 2016. Pal, who is a student of VisvaBharati, was inspired by the various dance forms he had come across in his student life there. “Though I was learning semi-classical dance forms and Rabindra nritya, I was also exposed to folk dance forms such as Chhau, Dhali, Adivasi... I wanted to try and combine these in one dance drama,” he says.

In 2016, he along with Mukherjee decided to produce Rabindranath Tagore’s Valmiki Pratibha. “In this, we introduced the Raibeshe-Dhali form. That was my first attempt with Raibeshe,” says Pal.

Those days, there were some women in the troupe. “But let alone Raibeshe, getting the girls on the team itself was a challenging task,” says Pal. The task fell on Mukherjee to visit homes, request parents and convince them to let their daughters join. “Actually, there is a kind of dance that has become popular among youth in the rural areas of Burdwan and Birbhum. It is called ‘boogie boogie’. Girls dress up like cheerleaders and dance to Hindi numbers for a boogie woogie show. No one wants their daughter to be part of boogie woogie. It was very difficult for us to convince the parents that our dance form would be different,” says Mukherjee. Besides, even those convinced that this was going to be different feared that a dance form which involved such a lot of acrobatics was sure to lead to serious injuries.

The production of Valmiki Pratibha was a turning point. “The village elders appreciated our effort. But then, travelling for shows was still a challenge. We had to take the parents of the girls along with us,” says Pal. He adds, “Over the years, the number of parents travelling with us for shows has gone down.”

Back to Raibeshe. The “virile” war dance form was discovered and recontextualised by civil servant, reformist and founder of the Bratachari Movement, Gurusaday Dutt, in the early 20th century. According to Baratachari septuagenarian Naresh Ji, who used to teach Raibeshe at Rabindra Bharati University, “Men in ghaghra-choli with long hair tied with red ribbons performed a kind of a dance for a few minutes before breaking into fierce acrobatic movements. They would shed the attire of women onstage and perform acrobatics in red and white dhoti. The first time Dutt saw such a performance, he noted down in his diary that he had seen an adbhut dance.”

Dutt was on a mission to put together a corrective to the colonial discourse about the “Bengali people”, about their tradition or lack of it, and about their physical prowess.

And that is why he tried to shrug off Raibeshe’s prevalent meaning — a dance that had to do with artistes dressed as Rai or Radha — and made it about a dance form that involved rai bnash or the best bamboo.

Says Pal, “It was not a dance form that was common in East Burdwan. The first time I saw it being performed was when dancers from Birbhum’s Charkalgram did a roadshow.”

The dance group in Charkalgram is run by Sunil Thandar, who belongs to the Bagdi caste. It has people who have been performing for generations — a Bhandari who is a barber, a Lohar who is a blacksmith, a Koiborto who is a fisherman… Basically, all so-called lower castes.

But why bring up caste?

Says Naresh Ji, “In the 14th century, the padatik bahini or foot soldiers of the king of Rajnagar block in Birbhum district were called raibeshe or bamboo warriors. They were known for their archery, spear throw and other martial activities. They also walked on bamboo stilts to cover long distances in times of war and need. But when the British took over, they banned the padatik bahini.”

Members of the disbanded bahini, thereafter, took up alternative sources of livelihood. Some joined the local constabulary; some were in the pay of the zamindars as lathials and/or palanquin-bearers; a third category worked for the entertainment of babus and would cross dress for the purpose. Another section turned dacoits and then there were the war dancers. As you see, caste was then incidental to this dance form.

In Ujan, caste is not a factor; it is just about dance. Twentytwo-year-old Payel Sarkar says, “At first Raibeshe appeared to be a difficult dance. The men climbed on top of each other, balanced on another’s abdomen and danced. We never thought we could do it.”

Tithi Mondal, 19, remembers how one day mastermoshai asked her to climb onto Saheli’s abdomen and wave a flag. She says, “It was fun and Saheli also did not complain of any difficulty.”

After more than a year’s formal training, today Saheli can now do a perfect vault; Jaba can climb onto Rishita’s shoulder without falling down; Purabi can bend her body backwards like a bow. “It is not that difficult,” says Sudipa Hazra.