Advertisement
Home / Culture / A rhythm runs through it

A rhythm runs through it

There are many ways of mapping a city. The author writes about one such initiative 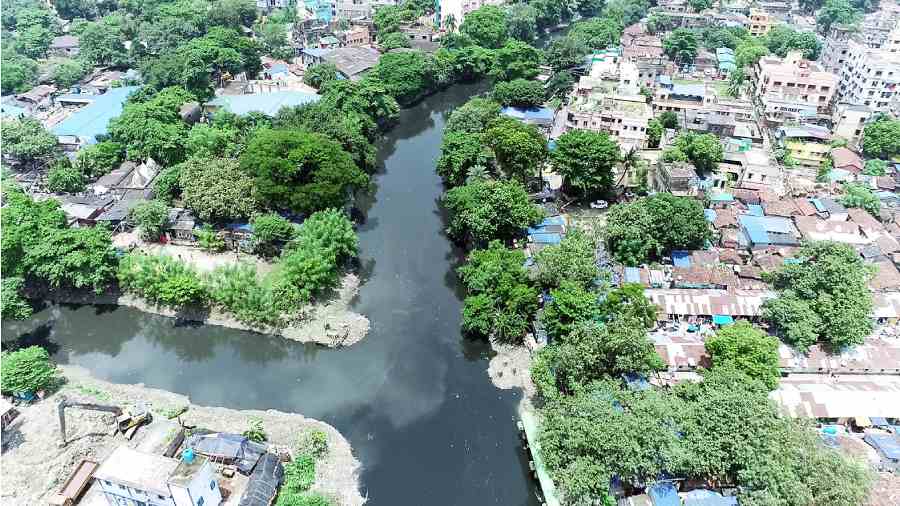 A meandering black ribbon makes its way through congested slums, under bridges, past construction sites, beside rail tracks. A drone spies the ribbon slither its way out of the concrete jungle into greener pastures. The ribbon is the Adi Ganga or what was developed into the Tolly Nullah in 1777 by William Tolly; a swirling waterway transporting goods and indentured slaves.

A 33-minute film screened at Victoria Memorial Hall (VMH) recently was the culmination of a project titled Route 033 — the STD code of Calcutta — undertaken by the India Foundation Arts (IFA) in collaboration with VMH and partly supported by the Goethe Institut, Delhi, with Madhuja Mukherjee, professor of film studies at Jadavpur University, as the principal investigator.

The film, an onsite immersive media installation titled Kolkatar Nokshi Katha, is a tapestry of intricately woven images of the city around the Tolly Nullah.

Mukherjee says, “The photographs at VMH, which were the starting point for this project, were of central Calcutta of a certain time. I wanted to look at the city and remap it, but not by looking at the city principally through central Calcutta and north Calcutta as do most of our films and literature”.

It was geographer Keya Dasgupta’s article on Bhowanipore that encouraged Mukherjee to look at the peripheries. In her book Mapping Calcutta, Dasgupta writes: “Town plans and maps have had an uninterrupted growth since the inception of colonialism in the Indian subcontinent with port cities becoming some of the most mapped sites. With the English establishing their foothold in the presidencies of Bombay, Madras and Calcutta, by virtue of its importance to colonial powers, Calcutta became one of the most mapped cities of colonial India.” In the piece on Bhowanipore, Dasgupta looks at how a locality situated beyond the city’s jurisdiction at that time — the British colonial period, a low-lying tract in its southern fringe was mapped in minute detail.

The earliest plans of Calcutta, Dasgupta says, were made by engineers for purposes of defence and the layout of fortifications.

Among indigenous cartographic efforts were Romanauth Dass’s Kalikatar Manchitra and another one of Kalighat, both from the late 19th century. Says Dasgupta, “The two vernacular maps were not bound by constraints of official authority but more by individual imagination and a local or indigenous perspective.”

Back to Route 033. Mukherjee tells The Telegraph, “We found it was possible to have a routing of the city through ways other than streets. As we started following the Adi Ganga, we saw what life was around the waterway.”

Mukherjee’s camera captures small ghats and how people live around them. She says, “There is a particular rhythm of the water that forces you to see the city from a different perspective. The project also informed us about the ways in which Calcutta has developed.” Mukherjee’s map starts from the Kalighat temple and stops at Ramkantapur, where the Tolly Nullah becomes Narayanganj Khal.

Dasgupta says, “Colonial maps portrayed what they had to, the black town, the white town, the grey town.”

According to her, maps are not just images, they tell stories.

At the event organised at VMH, Dasgupta asks Mukherjee the purpose of her map. Mukherjee replies, “What we set off to do is blur the lines between central and south Calcutta. We went beyond the last pincode of Calcutta. If you follow Tolly Nullah, there is no endpoint. What we record is something like a bird’s eye view — it is a shifting, moving, audio-visual map of the city.”