Tracing memory’s twines with swirls, whorls and the moving finger behind them all 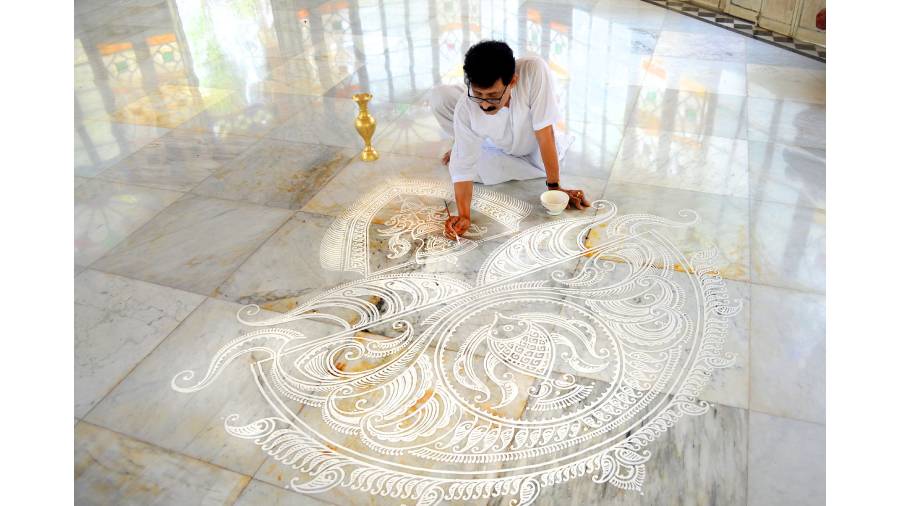 I must have been about five when I first realised that one didn’t always need a pencil to draw. I stood at the door of the puja room and watched my great-aunt dip her hand in a bowl of white paste. What emerged on the shiny red-oxide floor were circle upon circle of petals, paisleys, hills and vines. The alpana slowly grew to encompass half the room and all my mind.

Noticing me all agog, Monidi, as I knew her, handed me the bowl and taught me how to draw an S and its mirror image with a rag held just so. A blob within the bottom curve, five dots on top and voila, it became a pair of footprints, of Lokkhi thakur no less.

Alpana is the art of drawing designs using a paste of ground rice to beautify everyday spaces — the entrance to the house, the floor beneath a deity, the seat of the bride, a pot of holy water, an arati platter. Its origin is lost in the mists of time though Ajitcoomar Mookerjee, in his 1939 book Folk Art of Bengal, says its “forms and motifs... bear a close resemblance to the heritage of ancient art and culture to which the Indus Valley Civilisation belongs”. Abanindranath Tagore — possibly the first person to make an academic study of the alpana — wrote in his Banglar Broto that some of the motifs seem to be hieroglyphic in nature. A broto is a religious observance.

There were primarily three types of alpanas: the circular one used as a pedestal for the gods, the geometric forms to decorate floors, walls and objects, and the panels — by far the most elaborate ones — that illustrated the brotos dedicated to major and minor gods in the 33-crore Hindu pantheon. The broto alpanas, of course, disappeared along with brotos sometime in the 20th century.

Says Sudhi Ranjan Mukherjee, artist and former professor at Santiniketan’s Visva-Bharati University, “Grameen alpana started with simple motifs. Take the lotus, which is both significant and widely used. It started as a side view drawn in three to four simple strokes. Eventually, someone with enough skill and a strong artistic sense developed it into a stylised top view of the flower — a central circle surrounded by concentric rows of petals.”

Mukherjee calls this folk form grameen alpana to distinguish it from the more sophisticated version that was nurtured in Santiniketan. “It uses the forms — circle, semicircle, triangle and panels — with the typical wavy lines and kalkas, but it also incorporates nature-based motifs such as the kadamphool (bur flower), the spiral of the shiuli (night-flowering jasmine), the bird, fish and leaf.” 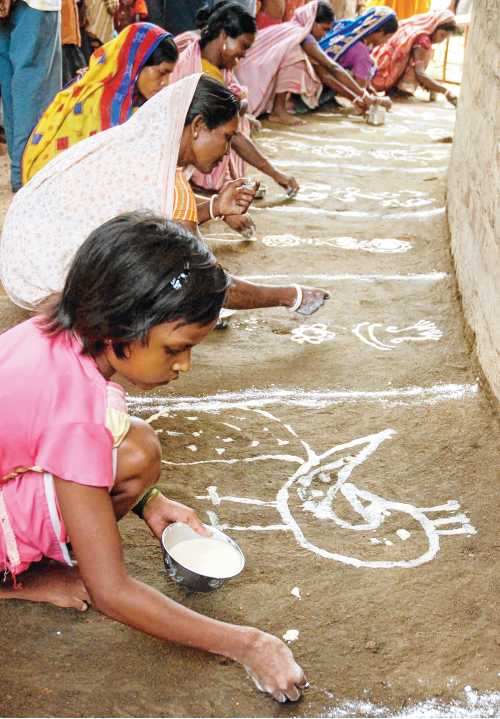 Alpana being drawn on the occasion of hal divas
Dayal Sengupta

This form was shaped by the creative vision of artist Nandalal Bose, carried forward by his daughters Gouri Bhanja and Jamuna Sen, the practical skills of Vedic expert Kshitimohan Sen’s wife Kiranbala Devi and the influence of Sukumari Devi who learnt painting at Kala Bhavana in the first half of the day and taught alpana-making in the second half. While the folk form is essentially religious, though decorative the alpana practised at Santiniketan is ornamental and secular. In Bangladesh too, alpana is used on a large scale to celebrate events such as Bhasha Dibash or Language Day.

Prafullakumari Devi, born sometime in the late 19th century in Pabna district of what is now Bangladesh, was known for her exquisite alpanas. Her grandchildren, now in their sixties and seventies, enthusiastically recall how when she lived in Lamding in Assam, neighbours and relatives used to send over biyer pidis — low wooden stools for the bride and groom — and other wedding paraphernalia for her to adorn. It seems Prafullakumari would make a paste of tamarind seeds and use it to paste a piece of cloth on the kulo (the traditional grain sifter) before she covered it in khorimati (Fuller’s earth) and drew exquisite designs on it, freehand.

Monidi too drew freehand but Satavisha Banerjee, who tutors primary school children in Dum Dum and whom friends and neighbours turn to on auspicious occasions for the traditional alpana, prefers to have a pattern before her. Satavisha, like the generations before her, learnt the art by absorption but she also remembers consulting “alpanar boi”, thin books that featured alpana designs — usually Santiniketani — on every page and were all the rage 20 years ago.

I know all about alpanar boi because I too turned to them when I wanted to carry on the art of alpana-making. But I soon figured out that my meagre skills with the rag were much better showcased when I stuck to the motifs Monidi taught me so long ago.

There is a reason every woman was an alpana-maker in the old days, though some were much better than others — the simple folk motifs could be mastered by all with some practice. The Santiniketan style, developed by artists, needs ninja brush skills. In this age of specialisation, the alpana too has slipped from the oeuvre of the common woman to that of the artist.