An exhibition to capture the wealth of River Hooghly’s heritage. The Telegraph reports 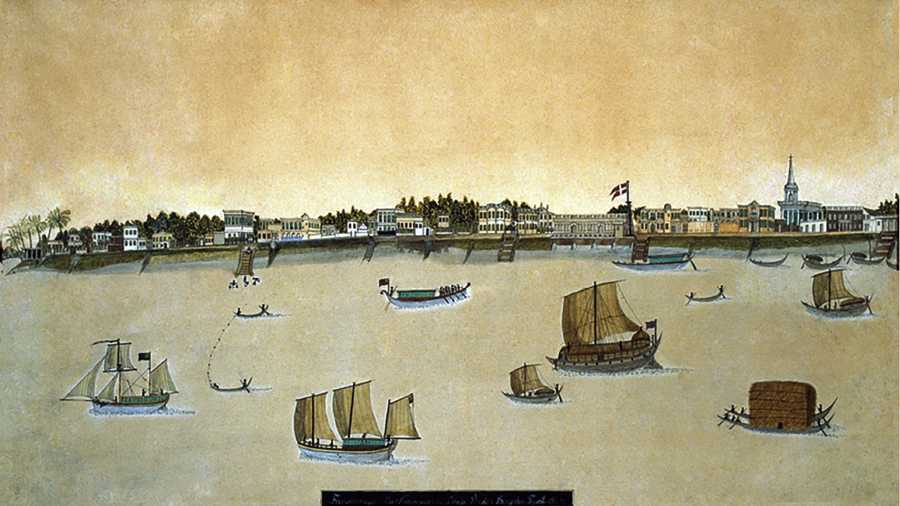 The walls of the 19th century Metcalfe Hall of central Calcutta had a river streaming across them. Streaming past heavily annotated panels, olden maps, visuals of queens, nawabs, company officials, flags, buildings... There was cotton, silk and muslin and bowls of potato, green chillies and cheese. “The textiles were meant to illustrate what the Europeans took away. Likewise, the food items were meant to indicate the culinary exchange,” says Sukanya Ghosh, who designed the exhibition “The Hooghly Heritage Hub” that was presented by the Calcutta chapter of Max Mueller Bhavan. She continues, “But the central point of it was the river. I took that up and let the line drawings flow through the exhibition.”

The Hooghly is the lower course of the Ganges. It starts from Dhulian in Murshidabad district and stretches for 520 kilometres before immersing herself into the Bay of Bengal. In Nadia it meets the Jalangi and further south it merges with the Rupnarayan. Of the 520-kilometre stretch, 80 kilometres form the western boundary of the Hooghly district.

Journalist Nazes Afroz has researched the content of the exhibition. The mounts and panels are heavy with his annotations. According to him, work for the project started in September 2021. Afroz, who went to London soon after, culled a lot of material from the British Library archives. He also accessed other archival material, academic papers and journals. He says, “For the last three decades, I have worked extensively on the jute mills of Bengal. I have also known the different communities of Bengal — Chinese, Portuguese, Jews, Armenians — I have grown up with them and that experience too helped me shape the narrative of this exhibition.”

Says Antara Mukherjee, who is an expert on the Hooghly, “This river has not only impacted the geography of Hooghly district and in turn of Calcutta, it has also defined the culture of the places and the lives of the people it has touched.”

According to her, “It was the Saraswati river that facilitated all trade activities. But the silting of the river in the late eighth and ninth centuries and an earthquake in 1505, with its epicentre in Nepal, changed the slope of Calcutta as we know it. The Saraswati got silted and the Hooghly rose to prominence.”

The writing on the introductory panel corroborates Mukherjee’s narrative. It is about the great port of Tamralipti at the mouth of the Hooghly river. And how post its siltation in the eighth century, the river port of Satgaon — at the confluence of the smaller rivers Saraswati and Jamuna with the Hooghly — took its place as the epicentre of all international sea trade from Bengal until the 16th century.

Afroz writes, “Through Tamralipti and Satgaon, Bengal represented ‘globalisation’ and ‘free trade’ almost 2,000 years before these jargon would be invented.”

Mukherjee tells a gentle, meandering story brimming with history. She talks about how the Hooghly cradled more than one European settlement along its length, how these settlements became the crucibles of new cultures and subcultures.

The exhibition is also structured around these milestones. So there are flexes titled “The Advent of the Haarmaads”, “Dutch VOC — The Largest Corporation”, “The French Connection”, “The Armenians, Jews, Chinese, Greeks, Afghan” and so on.

Mukherjee narrates how the French settlement of Chandernagore gave birth to the kobi gaan culture reflecting the banter between the coloniser and the colonised. The stories, much like the river, flow on. She talks of prostitutes who ran away from Calcutta and settled down in Chandernagore. This was in the early 19th century. It seems prostitute quarters developed in the southern part of the town, and unlike Calcutta, affluent localities did not object. As she tells it, there is a link between Battala literature and the Hooghly too. After all, Battala literature is replete with the stories of these prostitutes. Then there were curative properties of the Hooghly. Mukherjee says, “The proximity to the river gave the place (Hooghly) a certain reputation; the air was clean and good for health. The Tagore family built a palatial residence here. There were many more bungalows on its banks.”

More stories. The flex titled “Thames to Hooghly in 28 Minutes — The German Engineering” tells the story of London needing to stay in touch with its representatives in Calcutta. German engineering firm Siemens, Halske & Co. extended the existing European line to Odessa on the Black Sea. “Using a submarine cable, they reached the other side of the Black Sea in Georgia, then on to Persia to its southern coast. From there another stretch of submarine cable was used to reach Karachi. After the landfall in India, the line ended in Calcutta via Benares.

The work was completed in two years in April 1870 — the Thames and the Hooghly were connected. The first communication took just 28 minutes to transmit.”

What does Mukherjee make of the exhibition? She replies, “Considerable research has been done on this subject. There remains scope to showcase more.”