Advertisement
Home / Culture / The one that flew over some nest

The one that flew over some nest

The Telegraph on a unique project transpiring across Calcutta’s skies 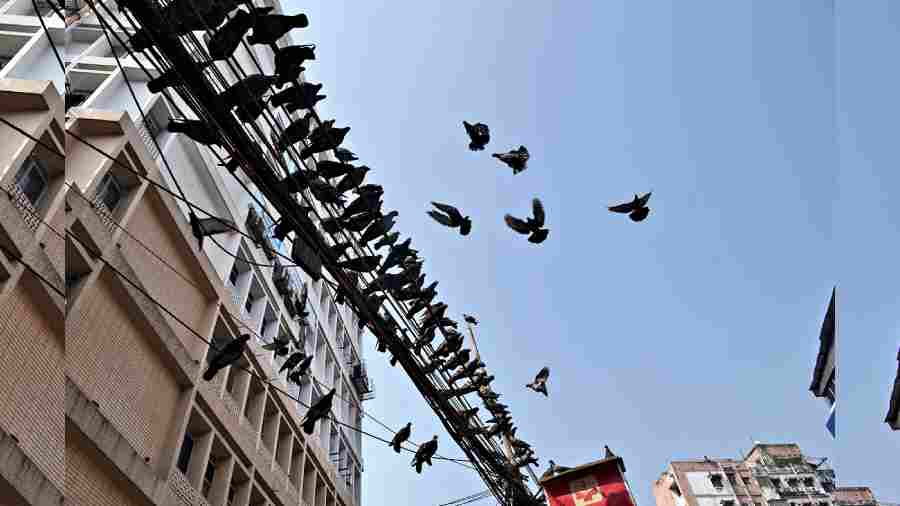 A chilling scene in Alfred Hitchcock’s The Birds (1963) — Federico Fellini had called the film an “apocalyptic poem” — depicts an avian, possibly a gull, trying to break in through the windowpane. Calcutta’s birds, unknown to most of us, have been proverbially knocking on our windows too — but with a different message.

Luckily, Madhumita Roy, a professor in the department of architecture, Jadavpur University, has heard the message right.

Roy has been associated with a one-of-a-kind project — funded by  the department of environment of the Government of West Bengal and conducted by her department — to examine the impact of urbanisation and changes in landscape on Calcutta’s avians.

And it all started with another iconic film: Satyajit Ray’s Kanchenjungha (1962). “A scene in  Kanchenjungha depicts the senior ornithologist Jagadishbabu lamenting the fate of birds. This particular scene has been etched in my memory. Birds that were very easily seen in our neighbourhoods a few years ago are not found anywhere nowadays. Within a span of 40 years, Calcutta’s landscape has changed drastically and birds are struggling to adapt themselves to the changes,” said Roy.

The diversity of species has reduced greatly in the city, with the house crow, rock pigeon, house sparrow and common myna comprising 78.6 per cent of the population documented.

But some birds, Roy noticed, are fighting back against this enforced displacement by choosing newer sites for nesting. Sparrows, she said, are building homes inside ventilators or jalis in old mansions; the black kite prefers high advertisement hoardings and even mobile towers; while window sills are a favourite for the common myna.

Calcutta’s avian spaces are as layered as the city. Ajanta Dey, who was involved with the project since its conception and is joint-secretary, Nature, Environment and Wildlife Society, observed that south Calcutta, considered to be greener than the northern part of the city, has a greater diversity in species even though some birds — the sparrow, for instance — have a distinct preference for uttor Kolkata’s crumbling mansions.

“The most popular sites of the congregation for birds and birders, however, happen to be pockets of greenery such as the Santragachi jheel, the Dhakuria lakes and the Chintamoni Kar Sanctuary,” said Dey.

Birds can sing songs, in a manner of speaking, about Calcutta’s green cover. “Early one morning, we discovered a rich concentration of sparrows among bushes of togor and kamini in Tala Park,” recalled Dey.

Roy added that the avian population and its habitation choices could, in fact, help map the concentration of trees such as the banyan and peepal and vice-versa.

Now that birds are nesting closer to human habitation, could this evolving — greater — proximity add a new dimension to the ongoing man-animal conflict?

Roy said that the war bugle had been sounded long ago. “Human-avian conflicts are common not only in urban areas but in rural areas too. Birds are not always invited by people inside their houses. Many a time, nest-building leads to untidiness within homes, forcing humans to drive the birds away,” said Roy.

The way out, she thinks, is to make the Future City more hospitable to birds and animals. “What is needed immediately is to create awareness among people as well as architects, designers and planners. Urban traditions, such as the community feeding of birds in public places, ought to be revived along with an appropriate selection of tree species that could help bird populations thrive. The other imperative is to create suitable bird habitats,” said Roy.

“Why can’t we create more spaces such as the Lakes or even Eco Park?” enquired Dey.

And time is running out.

The State of World’s Birds, an annual environmental compendium, has assessed that 48 per cent of the 10,994 globally-recognised species of birds are being threatened by the expanding human footprint along with degrading habitats and climate change. In India, the figure for declining aviation populations is reported to be a notch higher. Mankind, the report also says, devours as much as 14 per cent of the total bird population while 37 per cent of birds are fodder for the gargantuan market of pets, exotic or otherwise.

The next time a  cheel  or a kaak taps on your window pane, it may not be a friendly knock. Tipi Hendren, Hitchcock’s blonde lady, discovered just this much to her horror.