Advertisement
Home / Culture / The music and the memory

The music and the memory 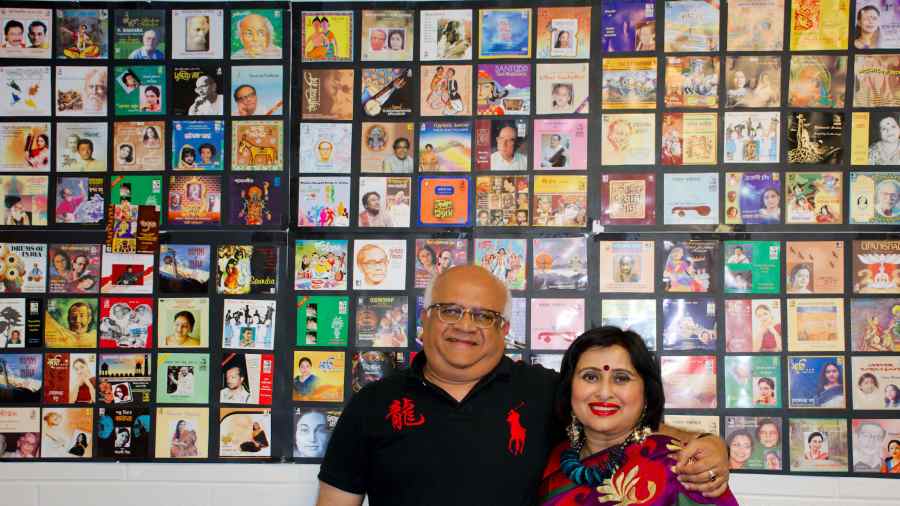 This was long before mobile phones and emails, STD meant long distance phone calls and ISDs were yet to be glitch-free. The Indian in the United States — nostalgic and out of place — was homesick. It was a sentiment that Atanu Biswas, formerly of Calcutta, then of Newark in the US, understood well. And it was to cater to

his compatriots that the research chemist launched Biswas Records in 1994.

“Those days, recordings in India were still done in the analogue mode. They were then transferred to CDs, which were therefore not truly digital. That is why I decided to record my own CDs,” says Atanu. Unfortunately, he did not earn enough at that time to run a record label and support a family of four. However, music-loving friends and acquaintances were more than willing to pitch in and Biswas Records took off. The first CDs from its stable were Traditional Bengali Songs by Anup Ghoshal and Bengali Ragpradhan Songs by Haimanti Shukla. “These were also the first CDs for both artistes and they were released at the 1994 Chicago North American Bengali Conference (NABC),” Atanu remembers. These were followed by two CDs of Tagore songs, one of them by Suchitra Mitra.

The recordings for the CDs were mostly done in Calcutta. “I used to have the artistes take care of their recordings and I paid them a lump sum to own the recording rights. That way, I did not have to be involved in all the details,” says Atanu, who anyway had to stay up late into the night to coordinate with artistes, musicians and arrangers in India because of the time difference.

Biswas Records also produced CDs of actor Soumitra Chatterjee reciting from Sukumar Ray’s Abol Tabol, singer Hemanta Mukherjee reminiscing, Mahalaya man Birendra Krishna Bhadra doing a reading of Sri Sri Ramkrishna Kathamrita and Swami Sarvagananda chanting the Gita. The Bhadra recording was gifted to Atanu by singer Ramkumar Chattopadhyay, while the live recordings of Debabrata Biswas were gifted by Tushar Talukdar, then the Calcutta Police commissioner. There were audio plays by the recently-deceased Saoli Mitra, comic songs, light classical music and poetry. This bonanza was, however, available only to the NRB — the non-resident Bengali — in the US and Canada.

“It was like having a bit of home,” says 56-year-old Arijit Chatterjee, who lives in Boston, US. “Visitors from India were infrequent and even if they brought you the latest CDs, you often wanted an old favourite.” There was then no YouTube to turn to.

Biswas Records filled this gap. The logo of a Bengal School-influenced line drawing of a traditionally-dressed Indian woman holding a lit lamp with Biswas written at the bottom was always found in abundance at major Durga Pujas across the US, from Boston to San Francisco. A passion project for Atanu, whose day job involves trying to turn soya bean products into biodegradable packaging for FMCG, and his wife Sheena, Biswas Records produced more than 175 albums of Bengali as well as north Indian classical music till 2005.

“It was superior technology that helped me establish a record company. However, it was the same technological evolution that brought an end to it,” says Atanu. He also shifted his focus to his academic career, moving from industrial to academic research in 2002.

CDs — and even DVDs — produced by Biswas Records became obsolete with the advent of YouTube, which was launched around end-2005, and the rising popularity of music streaming platforms. Copies of the albums Biswas Records produced — digital recordings made in India were turned into CDs at the Indiana plant of Sony and at least a 1,000 copies of each album had to be made — started piling up. “I lost interest in CDs because they became pieces of useless plastic, which now I need to dispose of,” says Atanu, who finally threw out 60,000 old CDs that had been collecting dust over the years.

Then Atanu had an epiphany. “My customers from all over the world and friends reminded me that it is my social responsibility to make a YouTube channel and upload all our CDs so that people from everywhere can listen to Biswas Records’ creations. As most of our CDs were unavailable in India, this channel will be a treat for music lovers there,” Atanu points out. He had already started a YouTube channel called Biswas Records in 2017 and put five or six albums online, mostly those with pan-India appeal. Now, he put speed on the process of uploading. As of now, the channel has 75 different albums, most of them uploaded in the last five months. “We will upload around 130 more CDs in 2022 and that will complete my journey as a records producer,” says Atanu. The channel already has 5,18,000 subscribers and all the albums — all about an hour long — have high double digit views. The latest, Sambhu Mitra’s Kalidohe recited by his daughter, the late Saoli Mitra, was uploaded two weeks ago.

“The fact that it is time appropriate definitely helped with the views,” says Atanu, who doesn’t keep too close a track on how many views the uploads get. He is just happy that his work of nearly 30 years has found a new audience.