Years before this reign of miracles and magic, India was once in the throes of a knowledge movement. The Telegraph tells the story of one man and his place in all of it 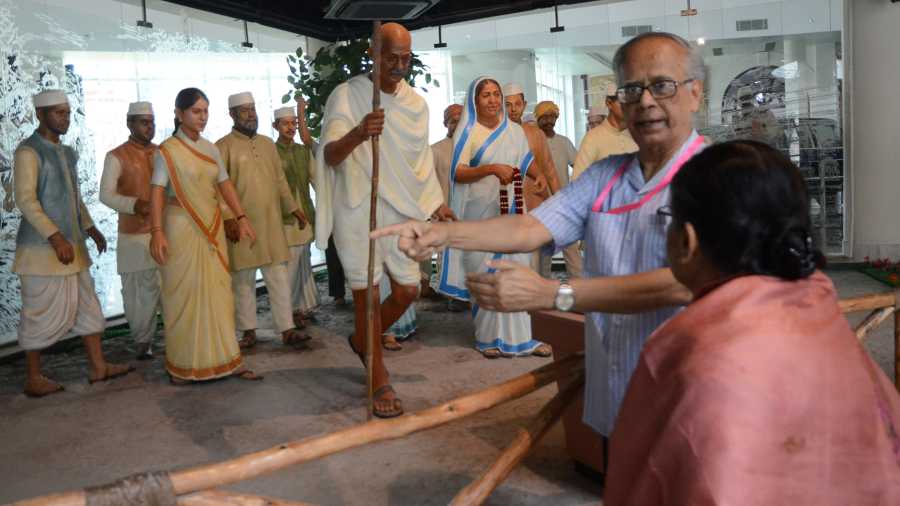 Saroj Ghose learnt about the first press of one of the oldest dailies of India — published out of Bengal — in the early 1990s. He was collecting artefacts and exhibits for science museums and science centres across India. He sent an emissary to the then proprietor and made an offer but the latter refused to give away the old press. Ghose did not give up either. He invited the proprietor to the Birla Industrial and Technological Museum (BITM), Calcutta, and when he did, Ghose himself showed him around. And then, he asked for the press, and was once again refused.

This September, an international seminar was organised by BITM on the occasion of his 86th birthday.

“There were no science museums in India before BITM,” said Ghose. He continued, “The forerunner was New Delhi’s National Physical Laboratory that was set up in 1954; a travelling Unesco exhibition on senses was housed in a room. A small museum came up in BITS Pilani that year; it had exhibits on art, agriculture and industry through dioramas.” A diorama is a model representing a scene with three-dimensional figures.

It was the Government of India that set up BITM under the Central Industrial and Science Research programme in 1959. At the birthday function, Ghose spoke about how, persuaded by the then chief minister Bidhan Chandra Roy, the Birla patriarch and legend Ghyansham Das Birla donated the building and the land.

Samar Bagchi, former director of BITM, said, “The Birlas wanted a museum for display of industrial objects. India did not take part in the Industrial Revolution, so we did not have many industrial objects to display. But Bidhan Roy had a vision and he wanted to model the upcoming museum along the lines of the Deutsches Museum in Munich and the London Science Museum.”

Ghose says it was an impossible brief. “None of us at that time had seen a science museum.” Amalendu Basu from the Patents Office at Calcutta was roped in as planning officer. Basu, in turn, hired a fresh graduate from Jadavpur University (JU), Saroj Ghose, as his help. Ghose remembers his first job — he had to buy a pair of pliers and a screwdriver.

Basu was sent on a study trip to Europe to learn what a science museum was and Ghose was asked to prepare exhibits so that the museum would be ready by the time his boss got back. “But his first letter to us from Europe said, ‘Stop everything. We are on the wrong track’,” said Ghose.

Basu returned and Samar Bagchi joined the BITM team. “We did an electronics gallery. It was based on my experience at the annual exhibition of JU,” said Ghose. At the electronics gallery, an alarm rang when a visitor entered and glass doors opened automatically. As visitors cut the electric paths, bulbs glowed, lights changed, the radio started, and when they exited, a voice bid them goodbye. All this was happening long before automatic doors became de rigueur.

The period from 1965 to 1970 was a period of extension of activities. The Visvesvaraya Industrial and Technological Museum came up in Bangalore.

The Deutsches Museum became the first to develop working exhibits with push buttons. Bidhan Roy mandated such exhibits for BITM. Prior to Deutsches, even in the Arts and Industry Building at the Smithsonian Institution, US, the collection comprised old articles of scientific discovery and stories of discovery. The Exploratorium opened in San Francisco, US. It was a warehouse where schoolteacher and scientist Frank Oppenheimer demonstrated how visitors could learn science hands on. The Centennial Science Centre opened in Ontario, Canada.

Ghose did his PhD at the Smithsonian in the early Seventies, while his friend from JU, Rathindra Mohan Chakrabarty, trained in museology at Toronto, Canada. Both of them came back to set up the Nehru Science Centre in Mumbai.

To get back to the anecdote at the beginning of this piece. When the proprietor died, his nephew got in touch with Ghose and donated the old press saying it had been his uncle’s wish that the press be donated to the museum. Today it is the centrepiece at the Information Revolution Gallery of the National Science Centre in Delhi.