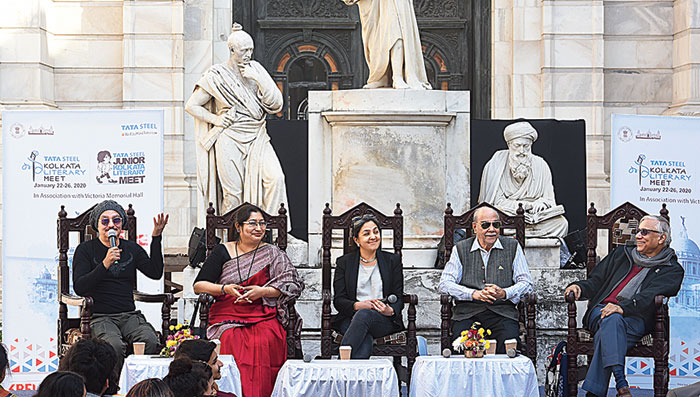 Sukanta Chaudhuri: Lear is not only subjected to endless depths of suffering but also degradation... almost de-humanisation. We have here Lear... a king not too long ago and now we find him naked, demented, utterly helpless. He is blind too. This reduction of the human state to almost sub-human can be compared to Manik Bandopadhyay’s Pragoitihashik. The depiction of Lear’s failure to adapt to the situation has been done by others with remarkable success. When we try to adapt the basic motive of Lear in any kind of contemporary situation, we have to go out to some of the most horrific battlefields, sights of civil war and destruction.

Debnita Chakravarti: The line where he says: “To shake all cares and business from our age”, maybe he takes business to a very different and literal level.

Preti Taneja: The line where Lear looks at Edgar and says: “Unaccommodated man is no more but such a poor, bare, forked animal as thou art” — he asks himself and us as to why this play transcends time and age and it’s particularly relevant to the times we are in now. That question is an existentialist one... also a political one and that is “Who is it that can tell me who I am?” For us it’s a question across the globe as Britain deals with Brexit and here it’s about citizenship. It’s a question about the self and our relation to society, to our families and friends. And if we are all bare, forked animals, it gives us a sense of equality. There’s a lot of punning relating to hopefulness. So you can read language in two-three different ways. It’s that archetypal use of language that Shakespeare is bringing to us and saying that it’s a moral and ethical choice.

Chakravarti: Peter Brook said he sees King Lear as a vast, complex, coherent poem designed to study the power of ‘nothing’.

Vinay Pathak: When we started our interpretation for Nothing Like Lear, it had to be something we relate to. Because King Lear has always been created by Shakespeare. But we tried to perform in our own way. The fool is there in most of his plays. And we did think we are fools. But who is the fool even in a modern context? In society? We realised we all are. So we created this middle-class Marathi man and his struggles. But at home he is the master. He has a daughter. To the fool, his life is as royal and also as scarred as King Lear’s. And that’s where the conflict starts — Nothing will come of nothing — it’s deep and profound. To a clown, ‘nothing’ matters. King Lear is open-ended... it’s like a wound. If it’s bleeding, live with it.

Chaudhuri: What if Cordelia had just hugged and kissed her father and said: ‘Of course I love you’... the world would have gone in its usual way. What’s the problem there? It’s easy. But Cordelia clearly has a problem with it. She cant be a part of the circle of hypocrisy. She has to break out. Maybe as the youngest daughter she thought she had to grow up, assert herself.

Anant Mahapatra: It was an absolute challenge adapting King Lear. This play is relevant in the 21st century and it’s leading us to the same concentration camps. But can someone sitting on the fifth seat of the fourth row relate? While directing plays, I am concerned about the audience more than about the actor. It’s more about feeling than reading or watching... Does your heart bleed?

Taneja: The play starts with age and ends with youth. It starts with women who are alive and ends with all the women dead. “The oldest hath borne most: we that are young, Shall never see so much, nor live so long” — We, in the world’s biggest democracy, which has one of the youngest populations in the world... there’s a question, ‘What are you going to do with the time that we have left? Are we going to perpetuate the same status quo or do something different?’ Hence the book is called We That Are Young.

Vinay Pathak performs in Nothing Like Lear
B. Halder & Pabitra Das

Or has it? The clown, played by Vinay Pathak, starts off the proceedings in Nothing Like Lear as part of the Tata Steel Kolkata Literary Meet 2020 in association with The Telegraph and Victoria Memorial Hall, at the National Library’s Bhasha Bhavan auditorium on January 23, by uttering these lines, taking the audience by surprise.

The clown or as the fool in Shakespearean plays, manages to hold the audience’s attention for almost two hours in a sort of a soliloquy that thrills, humours, scars and scares the crowd, and even makes us despair. The audience that had arrived in hordes, gets into the act (pun intended) by asking the clown some uncomfortable questions like, “You are half-an-hour late”, to which the protagonist has some smart-Alec answers. Interactive in nature and form, the solo-act play allows Vinay to engage with the audience in his own inimitable way — you almost feel it’s an act within an act. In one scene, the clown talks of visiting a doctor who is a ‘psy’ a ‘psy’... to which pat comes the answer from a front-row member — a psychiatrist, to which the clown replies “You are a know-it-all. I am sure you didn’t have to buy your ticket.”

Based on one of William Shakespeare’s finest tragedies, King Lear, Vinay explores the psyche of the protagonist set in an urban timeframe. He plays the fool but is actually ‘playing the fool’ — as the voice of reason and conscience, as one of the voices of King Lear himself. This Lear, however, doesn’t have three daughters, nor is he a king. This is a middle-class clown but much like the classic play, he too ages, he transforms, he ripens. It’s not a modern take on King Lear, it is about a new-age Lear.

Vinay seems to have mastered the art of playing Shakespearean characters (he has been playing the protagonist in Hamlet: The Crown Prince).

The ‘nothing’-ness of King Lear is visited several times — from the psychiatrist who tells him, “Don’t worry, you have nothing”, to making balls out of ‘nothing’ to “When you have imagination, you need nothing”. It’s neither a parody nor an adaptation. Though the premise is that of King Lear, one could interpret it as an Everyman’s tale about one who is lamenting his age and life, a father whose child has misbehaved with him and turned ungrateful. There is even a reference to Facebook as the clown says: “When my brother pokes on FB, women get pregnant.” It’s a different matter though that a woman from the audience took offence to the line and cried out, “It’s not funny”. Time and place are clearly blurred in this play.

The protagonist (the clown), talks about his father, brother, his daughter having moved to France and how she insulted him when he went to meet her.

As a master performer, Vinay Pathak dons a variety of characters in his solo act, holding the audience in thrall with his range of emotions and voice modulations — playing both the king and his alter ego, the fool. The improvs are brilliant and the lighting is true to the theme and setting, paving the mood for the various emotions in the play.

Ironic as it may sound or look, the comic performs the tragedy here!