A report from Scandinavia on the whiff of coconut fibre smoke, dhaak and khichudi 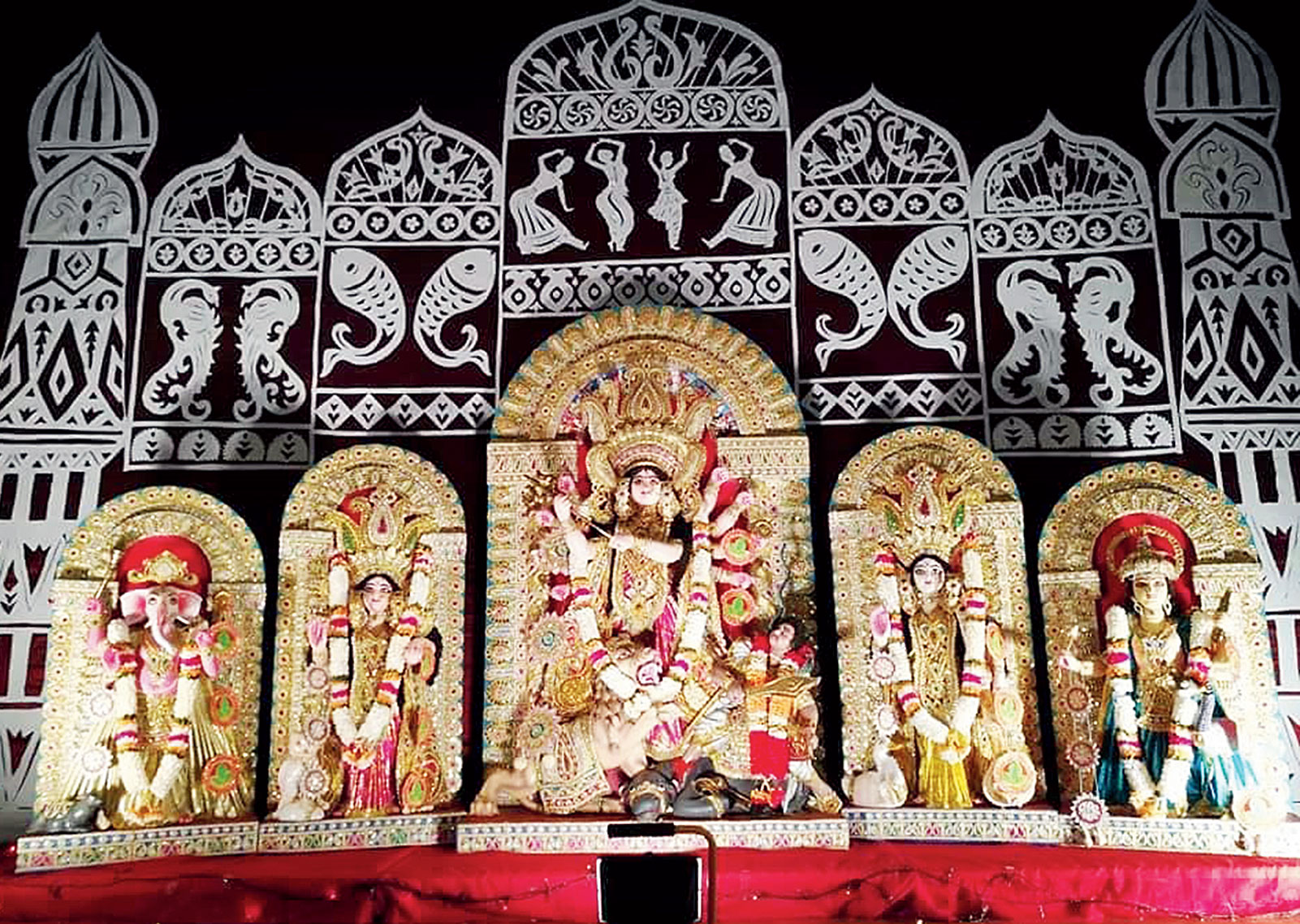 The year was 2013. It was a typical autumn day in Oslo. I could feel the lukewarm strokes of sunlight amidst crisp cold winds. An eclectic mix of yellow, brown and orange leaves adorned the trees all around. As I walked in my fuchsia-pink silk sari along the quiet alleys, I managed to attract quite a bit of attention from onlookers. Back in India, the thought of wearing a dull overcoat over my sari would be unthinkable. Hey, welcome to Scandinavia! You can never ditch the coat here, barring a couple of months in summer.

As we reached the venue, a big brown wooden closed door stood before us like an eyesore. No sounds, lights, decorations or the famous food stalls outside. Are we here for Durga Puja celebrations? I felt dejected (a little, though). A few minutes later, we came across a familiar face who led us inside where a world of contrast awaited. A familiar whiff of coconut fibre smoke, the beats of drums, men in crisp white kurtas and women in resplendent saris and the aroma of khichudi — they were all there and I felt like being at home again. Thousands of miles away from India, in this remote corner of Scandinavia, the fervour of Durga Puja remains the same. Apart from the dramatic change in geographical location and the familiarity of friends and family, the joy of togetherness and the celebration of our culture remains the same. Isn’t this the very essence of every festival?

The birth of the Oslo Durga Puja

The year was 2009. It was that time of the year when a quaint and wistful, often inexplicable, desire gripped a handful of Bengalis in Oslo. The beats of the dhaak residing deep in their hearts, they yearned for a few moments of euphoria in Oslo. And responding to that overwhelming urge to celebrate Durga Puja, a group of nine or 10 women decided to take the plunge. They organised a joint meeting and invited others to join in. There was hesitation because of the challenges, which came in the form of extreme weather conditions, manpower and expenses. But, after weighing the options, a decision was taken to order idols of Goddess Durga and other deities in one single frame of about 75cm in height from Kumartuli in Calcutta. The venue was booked and 40-odd people gathered to celebrate the first Durga Puja in Oslo.

There is enough bhog to go around

On our 10th anniversary, our enthusiasm knew no bounds. Be it decoration, cultural programmes, food arrangement or social media promotions, our preparations for the grand festivity reached its peak. What started as an initiative by women in 2009 continues to be the same. Even today, most of the committee members are women. As early as March, we started our preparations for the grand event of the year. We bounced off ideas, donned the hats of campaign managers, fundraisers, social media campaigners, decorators, chefs and performers to draw up an efficacious plan for our 10th anniversary.

A Durga Puja pandal to touch, for the visually impaired

Always on a weekend

The people who have made the Oslo Durga Puja possible.
Picture: Rajiv Sarkar

The joy and fervour

One of the highlights of 10th anniversary celebrations was a group dhunuchi naach, which we had organised for all men and women on Saptami evening. We invited friends from various communities to sport saris and kurtas to celebrate the joy of the dhunuchi naach. Thanks to the generous contributions and hard work of some of our members, we have bought and shipped in a brand new dhaak from Calcutta this year. Not only Bengalis or Indians, the Oslo Durga Puja is a unique platform for people from various corners of Norway, Sweden and Belgium. Over three days, we had cultural programmes, shows for children and various other competitions. We also had performances by Norwegians who took delight in our festivities. From 2009 to 2018, we grew in numbers and moved from a smaller venue to a bigger one. Over the last 10 years, the Oslo Durga Puja has procured new idols every three-four years.

The laws of the land do not permit us to have a big ceremony during immersion. But we never shy away from having an energetic and buoyant bisharjan dance and the sacrosanct sindoor khela for women. Our modest celebration in Oslo might fall short of the grandeur back home but when it comes to warmth and camaraderie, devotion and merriment, that’s always there in oodles. From the mystical music of Mahalaya to the energetic dazzle of dhunuchi naach, every occasion calls for a celebration here.

And, as for me, from being a hesitant visitor to becoming one of the sprightly organisers and participants, my tryst with the Oslo Durga Puja continues. Please visit us when you are in Oslo next year. We extend our heartiest welcome to each one of you. Come and you shall take home memories that you will cherish forever!

You can learn more about the Oslo Durga Puja at `www.oslopuja.com`and on Facebook at `www.facebook.com/OsloDurgaPuja/`