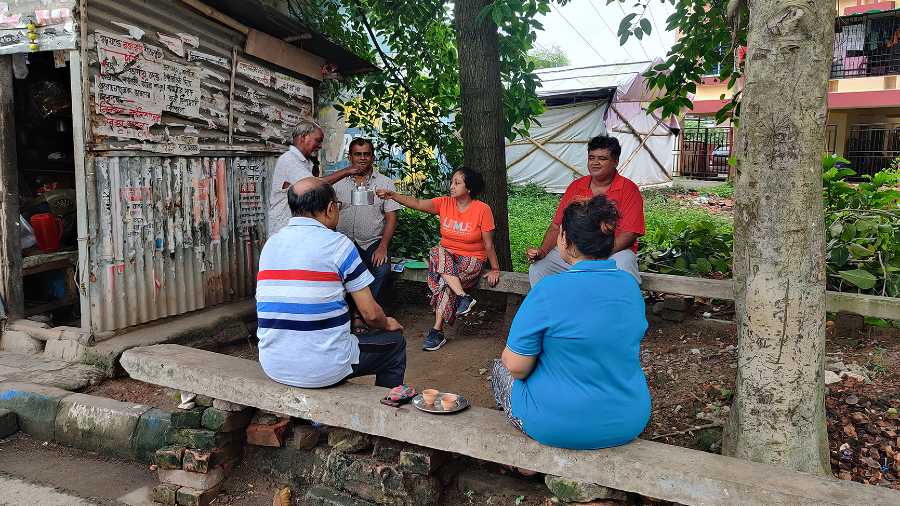 Plastic covers: check. Umbrella: check: Double masks and sanitiser: double check. Dressed in my morning walk gear I head out, ready to brave the torrential rain. This is no weather for a walk though. Calcutta is near-drowned from heavy showers for four consecutive days. But that is no deterrent for me and the six others who meet at the ubiquitous para tea stall for the morning cuppa.

In between different waves of infection and lockdown, this interaction with an assortment of neighbours — in the open air — has kept me going. The cha stall is my own Guernsey.

Guernsey is the name of a fictional book club — from the novel The Guernsey Literary and Potato Peel Pie Society — accidentally formed by some British islanders to escape Nazi wrath during World War II. And here we are trying to escape the wrath of the coronavirus.

Anyway, back to the cha stall. We congregate every morning, shaded under our varied umbrellas, seated on the plastic covers spread over makeshift benches, and discuss life in Calcutta and Madurdaha — a relatively new para in the eastern part of the city. Among the regulars are two women and five men, and there are some floaters. Everyone comes in with a story and anybody is free to join.

The cha adda might be typical of Calcutta, no matter the waxing and waning, but it has always been a men-only thing. It was not easy for me, Walker One, and Walker Two, a theatre actress, to fit into this Guernsey.

Those first many days, we would walk our walks amidst the greeneries surrounding the Eastern Metropolitan Bypass and then stop at the stall. We nursed the terrible tea a little distance from the regulars, chomped on coconut biscuits. Oftentimes, we shared an opinion or a laugh — from a distance still.

And some days later, what do you know, we were part of this man’s world.

Gradually we got so addicted to this routine that we would skip the exercise but not the adda.

And so I embarked on a new journey in the very neighbourhood where I had lived like a stranger for 15 years.

We are an eclectic lot — expert cook, number wizard, do-gooder, bookworm, share market buff. Conversations go somewhat like this. Pedestrian. “Why do you buy your fish online?” Lament. “When we were still in college, my friend and I would race each other to the monument in the dead of the night. Now I cook in the morning before going to work.” Utilitarian. “I have the doi maach recipe you were looking for.” Covid-induced nostalgia. “Do you remember Chung Wah? Do you remember Gol Bari’s overrated mutton curry? Do you remember...” Outrage. “Have you read about the fake vaccine camp?” The morning of that conversation we did not bother with the pleasantries. The breaking news of the day had left us perturbed, more so because the prime accused was found to be living a few yards away from our cha shack. We wondered aloud who else hid among the several half-occupied buildings of the locality.

It continues for an hour and then at 9.30am we head homewards.

The woman who would run off to Ballygunge for everything in the past, now feels complete in this Guernsey. It is courtesy Guernsey that I now know that all the help I need is only a WhatsApp message away, be it a local doctor (in case the virus finally gets me), a driver for late-night emergencies and, of course, the coordinates of the best fishmonger in this part of town. It is because of Guernsey that after months of pandemic-induced stasis, I can once more plan, be it a breakfast outing to Tiretti Bazaar or the four days of Durga Puja.

But such adda comes at a price. Eyebrows are raised and loud judgements are pronounced by onlookers — yes, in this day and age — when they see two women merrily holding forth among a group of men. Two women at a para thek have suddenly become the most ground-breaking thing that our little Madurdaha has seen. I feel like a revolutionary — without a cause.