The king of cash

Vijay Shekhar Sharma’s Paytm has a bulging e-wallet that could turn it into one of India’s biggest e-commerce winners, says Sarbani Sen 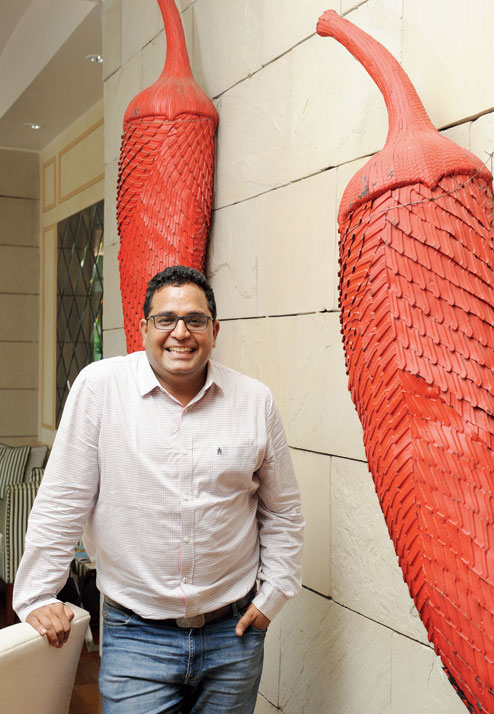 It’s the splashiest way to announce you’ve hit the big time in India’s corporate world. Earlier this year, mobile payments company Paytm struck a four-year deal to be title-sponsor of the Indian cricket team’s home matches. The company will also underwrite the domestic Ranji and the Duleep tournaments. The cost: a whopping Rs 203 crore.

For Paytm’s unassuming CEO-founder, Vijay Shekhar Sharma, it’s the perfect combination of a cricket-lover’s dream come true and a hard-nosed business decision. “If you want to build a brand among people, you have to like cricket,” says Sharma, who laughs and adds that he was his college’s ‘Jonty Rhodes’ when it came to fielding.

Sharma, 37, is one of the biggest success stories in India’s e-commerce world. His five-year-old company Paytm, was, at last count, valued unofficially at a stupendous Rs 15,000 crore (that over $2 billion) and investors backing him include Chinese Internet superstar Jack Ma, the brains behind global e-commerce giant Alibaba, who’s eager to muscle his way into the Indian market. Also putting money behind Paytm is India’s own Ratan Tata.

“I was inspired by Jack Ma’s super-energy and vision. Our meeting was supposed to last for twenty minutes and we ended up chatting for two hours,” recalls Sharma, who is now reckoned to be worth Rs 2,824 crore. This makes him the third rich e-commerce tycoon after the Bansals of Flipkart.

Sharma is unlike most other highly successful businessman — or maybe fame and fortune haven’t had time to affect him yet. He’s utterly informal and turns up for meetings in a casual shirt and jeans. When he leaves, he hoists a backpack that’s seen better days.

But don’t be fooled by the easy-going friendliness. Paytm is on the e-commerce fast-track and it’s about to be catapulted into an even bigger league because it’s beaten the competition to win a licence from the Reserve Bank of India to set up what’s called a payment bank. Payment banks are different from conventional banks and they’re not allowed to lend to customers or issue credit cards. “They can, however, accept deposits of up to Rs 1 lakh and offer current and savings account deposits,” Sharma says. That’s crucial for Paytm.

The tech-savvy will know what services Paytm offers. It’s a mobile wallet company through which one can pay for a taxi, a restaurant meal, or a mobile bill. Take a ride in an Uber cab and you can make a cashless payment using Paytm’s mobile app.

The company started out offering a quick and hi-tech way to pay electricity and phone bills from your mobile. But now Paytm’s quickly moving in multiple directions and has just struck up an alliance with online eating-out guide Zomato for
its online food ordering payments. “Paytm is the first wallet to be integrated,” says Tanmay Saksena, Zomato Order’s Global Business Head.

Besides that, Paytm’s also looking at how to get into the world of offline payments away from the Internet. Customers can spend depending on how much is in their Paytm wallet.

But if the money’s rolling in now, it’s coming after years of struggle. Sharma was a bookish child from a not very well-off family in Aligarh, who got two double-promotions in school and did his school-leaving exam when he was just 14. “I would read my elder sister’s Sanskrit books. I was a topper in Hindi, first in my class.”

His world came crashing down when he arrived at the Delhi Technological University (then the Delhi College of Engineering) for a course in electronics and communications. “I was one of the youngest students,” says Sharma.

Harinder Takhar, 38, his friend from college recalls: “My earliest memory of him is of a skinny, unsure fresher in college. We all went through much of the first year being abused, ragged, insulted by our seniors,” says Takhar, now Paytm Labs’ CEO.

But there was an even greater hurdle for Sharma. Coming from a Hindi medium background, he had to learn English. “Teachers would ask questions in English. From a front-bench guy, I went to the last row and eventually started avoiding classes,” he recalls. Instead he began spending his days in the computer labs.

After being an effortless high-flyer, he sank to the bottom of the class. “Failure hits harder for those who are successful,” Sharma says reflectively.

Still, he was so determined to learn, he started reading dictionaries. “I kept a diary and noted down new words,” he says. Finally, he had a eureka moment. “I realised the only way to crack it was to start thinking in English. That’s when I finally learnt.”

Sharma was the odd man out in another way. Most students had their eyes on getting a degree and heading abroad. But in his third year, Sharma realised he wanted to be his own boss, an unusual decision for a youngster whose family had no
business background.

Nevertheless, the world was changing, and after years in the computer labs, Sharma was at the forefront. In 1997, Sharma designed a portal Indiasite.net with his friend Takhar and started doing small projects. “We made content management platforms for various media houses,” he says. Just two years later, US Lotus Interworks bought Indiasite.net for $1 million. Sharma stayed on to look after the Noida office but quickly got itchy feet.

“I wasn’t comfortable with the monthly salary set-up. I wanted to do something of my own,” he says. Sharma then launched his own venture called One97 Communications in 2001.

Sharma says he’s deeply inspired by software stars like US entrepreneur Marc Andreessen and Yahoo co-founder Jerry Yang. “Underdog stories fascinate me a lot. I follow those who came from simple backgrounds and made it big as entrepreneurs,” he says.

For One97 Communications, his own underdog journey started from a small rented room in South Delhi. “It was a dingy room. I had two friends. Each contributed Rs 5 lakh,” he says.

One97 offered mobile content like news, SMSes, ringtones and jokes. “I aimed at getting content which was not available on the Internet and started making it available through SMS. That’s how I got into CBSE exam results which were very useful and not available on SMS in 2001. Then we got into cricket scores, music and news too,” says Sharma.

But within months, funds became tight following the 9/11 terror attack and Sharma’s partners withdrew, leaving him running the show. Two years down the road and he was in deep trouble. “In 2003-04 I was struggling. I started doing other jobs to help the company’s cash-flow — giving lectures and teaching people about computers.”

Then in 2004, he got a lifeline from Peeyush Aggarwal, a CA referred to him by a close friend, who invested Rs 8 lakh in the company. “He was the first investor. He also took a 40 per cent stake,” Says Sharma: “He gave me space to survive pressure from my family and he made hundreds of crores.”

By 2007, One97 was hurtling towards the big league. “That was the time when I got our first institutional venture investors, SAIF Partners and Silicon Valley Bank,” says Sharma.  There was a reason why investors showed confidence. “Vijay is probably one of the most passionate founders I’ve ever met. Our first investment into the company was quite small at $2 million, but it’s grown to be our largest India investment,” says SAIF managing partner Ravi Adusumalli.

As ring tones were big business, Sharma’s company used to sell more than 100 million ring tones in one month. In 2007-08, the company’s turnover went up to Rs 11 crore. Within four years, the company’s revenue soared to around Rs 220 crore.

“It was all due to telecom boom and consumer growth. We didn’t have to spend much on technology,” he says modestly. But he soon realised the company was about to plateau. “In the technology platform, there’s not much to do in content after a certain point,” he says.

But marketing through mobile phones was something new and One97 wanted to try that. In 2010, 3G became the catchword. “The whole industry was affected by it, everyone was trying to reinvent themselves,” says Sharma. That’s when he and his team used the technology to merge the smartphone and mobile Internet. “Paytm was formed in 2010 to make it easy for payment through mobile,” he says. One97 now is Paytm’s parent company.

Sharma wasn’t by any means the first to come up with the idea. “There’d been mobile wallets for a long time but none was doing well. Cash-on-delivery is something which consumers believed in,” Sharma recalls.

His investors weren’t enthusiastic about his plans. He asked them to give him $1 million to build Paytm for the payment business. “I got Rs 5 crore to build it in six months,” he laughs. With such a tight deadline, he had to deliver almost immediately. “Life was very hectic. I’d start my day at 6am. Within those six months, I had to build a brand, technology, product and get consumers. It was a very tense time. In fact, it was make-or-break time,” he recalls.

Today Paytm does more than 75 million orders every month, according to Sharma. It has 100 million customers and 35 million active users monthly.

The company’s also high on Jack Ma’s list of priorities — he has a 25 per cent stake. Says Sharma: “Every month, four groups from the Alipay (Alibaba’s mobile payments company) team travel to our Noida office.”

Inevitably, Paytm is spending heavily and much more than it earns now. But Sharma smiles and says he has funding for the next few years and expects to break even by then.

An adrenaline junkie, Sharma doesn’t take too many holidays, but whenever he can, he travels to the mountains with his wife Mridula.  “We enjoy rafting, trekking, camping,” he says. The couple married in 2005, and has a two-and half-year-old son, Vivaan. He’s also a music buff — Coldplay and Parikrama are his favourite bands. His Facebook page lists him as the founder and resident DJ at One97.

Mobile telephony and smartphone usage are slated to grow hugely in the coming years. And Sharma, the affable businessman with nerves of  steel, looks perfectly poised to keep pace with the mobile revolution and expand explosively.