Advertisement
Home / Culture / The HumDrum And Its Broad Cast

The HumDrum And Its Broad Cast 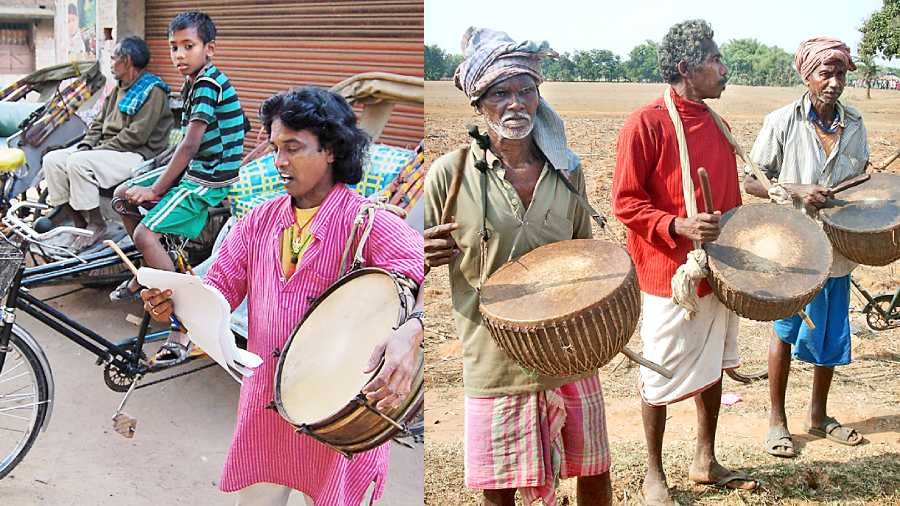 NEWS BEAT: This tradition of communicating important information is prevalent in some of Bengal’s villages even today.
Biswajit Roy Chowdhury; Mani Keshri
Moumita Chaudhuri   |   Published 06.11.22, 04:08 AM

In 1949, when my family was preparing to leave East Pakistan, my father put out a message for others interested in making the big shift. The dhyara pitiye announced his message in the haat or local market,” says Kalyani Thakur Charal, a writer and Dalit activist. Dhyara pitiye would correspond to town criers.

She continues, “When and how this practice began is not documented but town criers have existed for ages. Most of them are dhol makers and come from the cobbler community.” Dhol is a double-headed drum. What Kalyani says ties in with the Tamil Nadu government’s recent decision to do away with the “caste-based practice” of using the thandora for government announcements. From now on, megaphones will be used instead and messengers will do the rounds in vehicles instead of covering ground on foot.

The primitive practice however continues in Bengal, in districts such as Bankura, Purulia, Birbhum,  Nadia, Basirhat,  Midnapore and North and South 24-Parganas. “Whenever there is an announcement to be made, the sarpanch summons me. He will not give the task to anyone else,” says Donai Das of Hatgram village in Birbhum’s Nanoor. Das’s father was a town crier and so was his grandfather. Das himself speaks of his job with a sense of pride. “Everyone cannot do it. I have to memorise the entire message before delivering it,” says Das, who is a school dropout.

On designated dates, he leaves the house at 8am. He says, “I select a place where there are a lot of people. It is generally a market area. I start beating the drum to shake people out of their reverie and collect them in a place to give them the message.” Things have changed a lot from the times when his grandfather used to go out. “My grandfather never wore shoes. He used to work as a farmhand and was used to walking through stubble fields. Children would spot him from a distance and alert others about his arrival,” he says. Apparently, no one looked forward to seeing him in action.

Das says, “You see, he was in the zamindar’s employ and also someone who brought messages from the British administration at times. He had to remind people of the last date of paying khajna or tax.”

Says Kalyani, “It is such an irony. The messages were delivered by the people who were themselves going to be the victims of the tax levied. It was probably done this way because those messengers might escape public wrath as they were known to the community.” Or it could be that they didn’t escape the public wrath at all and that is why we have expressions like “don’t shoot the messenger”.

Das has a different story to tell. “I have heard from my father that there were some people in the village who would think that he is a privileged person and close to the administration and that is why they would avoid us.”

Nowadays, the messages are directives from the panchayat. It could be anything from linking the Aadhaar Card to mobile phone numbers, updating voter lists, announcements of the dates of panchayat and Assembly polls and general elections.

Sometimes social activists hire Das to announce a free blood donation camp or an eye check-up. Says the man who otherwise drives a Toto for a living, “Our village is quite big. I have to walk for two to three hours if I plan to go around the entire place in a day. For every dhiri or message, I get Rs 100 from the panchayat. I charge private bodies and individuals Rs 200 per message.”

And why not? The task requires him to shout at the top of his lungs. “Besides, they won’t let me stay home even if I am ill. Once my elder brother had filled in for me and I was told that he neither has the voice for announcements nor does he know the technique of delivering a message.” On days he goes out to deliver a dhiri, he does not go out with his Toto. “I am tired after walking for several kilometres,” he says and adds, “This job is more important than driving a Toto.”

Das does not use a Toto for his rounds as the roads of Hatgaram village are too narrow, but in Thakurnagar in Bongaon and also in places in South 24-Parganas, town criers use their own vehicles.

Bimal Das who is a dhol maker and also a dhaki (who beats the drum during Durga Puja) says, “For the last 10 years, the government has stopped calling us for this job. I have seen my father do it but I have not been asked,” says the 24-year-old.

Kunal Deb, a social activist who works among the tribes of Bengal and Jharkhand, says, “Dhyara petano is integral to tribal life. It is a tradition they swear by.” Town criers are engaged to announce small and big events, from the birth of a child to the election of a new village head, from announcing tree planting drives to stern instructions to villagers to to keep their cows and goats away from newly planted saplings. If there is a village festival around the corner, it is announced this way.

Unlike in Tamil Nadu where social activists have reportedly been lobbying for the ban on thandoras for some years, in Bengal, most likely, there has never been any such movement. Deb adds that in many places in Bengal, this job is not specific to any caste.

“In any case, the practice is on its way out. Messages spread faster on WhatsApp and everyone has a smartphone,” says Kalyani.