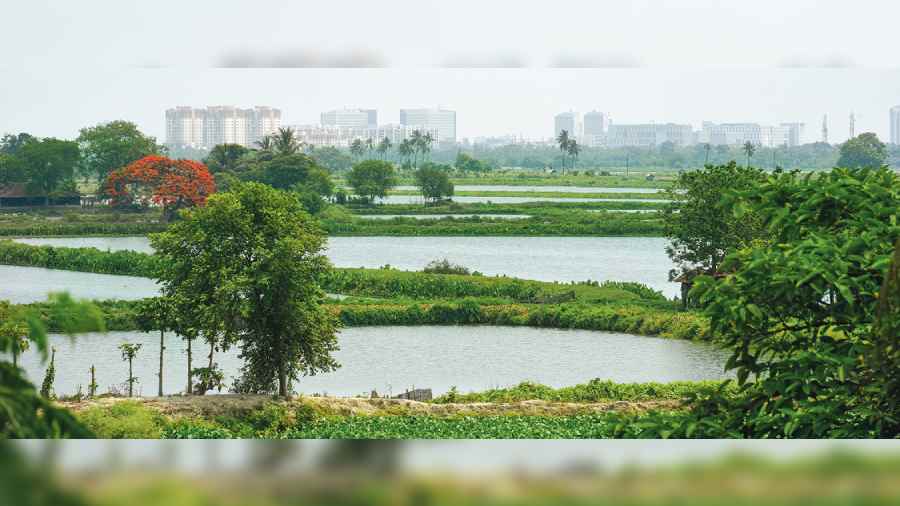 Nayana Naskar and Nibedita Naskar are sisters. They work as “eco guides” for whoever wants to do a round of the East Kolkata Wetlands, near the Kheyadah-Sonarpur and Bamanghata panchayat areas. Between the two of them, they can identify most of the trees, plants and weeds growing around the brackish waters.

They also know the birds which frequent this spot. Nibedita puts up a small performance — she mimics the cries of a black-headed oriole or a cuckoo. She tells her audience how these birds nest, when they fly off for the early worm, where they perch and how they swoop down on prey. As she mimics a cormorant, it calls back to her. “If my call matches theirs, they do that,” she says. A member of the Birdwatchers’ Society has gifted her a book on birds.

Nayana plays a little game with the leaves of a Jatropha curcas (bhyaranda gach). She folds one leaf into half and as the milky white sticky sap starts to ooze, she pulls the two halves so slightly that the sap forms a triangle. It catches the rays of the sun and glows. “Bagher chokh,” cries out Nayana. That would be Bengali for “tiger’s eye”. She applies the sticky sap on the middle of a pinwheel flower (tagar) and blows gently into the stem to form a bubble. “Our little world,” she says.

The East Kolkata Wetlands on the eastern fringes of Calcutta are spread over 12,500 hectares. They nurture the world’s largest wastewater-fed aquaculture system.

Dhrubajyoti Ghosh, an engineer in the West Bengal government’s sanitation department, discovered the significance of these wetlands when he was trying to figure out what happened to Calcutta’s sewage. Ghosh wanted the wetlands to be declared a Ramsar site or wetlands of international importance. In 2002, his dream came true.

To get back to the present, life in these wetlands is indeed a bubble, much like the one Nayana blows, a local faunainduced bubble, which can burst any day due to human exploitation. Biswajit Naskar, who has been living in Bamanghata for two generations, has given up cultivation as it yields little profit. But he still manages to make a decent enough living selling fish, as does Shankar Mandal of Kheyadah. Shankar’s family is a repository of local food culture. His wife Baishakhi is known to be a good cook and has a treasure trove of recipes. Most of her recipes have to do with fish. Baishakhi knows of at least six varieties of yam that grow in the area. Recently, the Goethe Institut organised a “sustainable living mela” at the Kheyadah High School grounds, wherein Baisakhi demonstrated the wealth and versatility of local produce. Some of the dishes she spoke of or cooked were chhola kochu diye ilish machher matha (a Hilsa dish), gudi kochu diye chingri machh (where the star is the prawn), mocha diye daal (banana flower cooked with dal) and so on and so forth.

Baishakhi’s daughter Rupsa Mandal, who is a Class VII student of Kheyadah High School, has documented her family’s single-day events with her mobile phone camera. She chronicles how her father gets up in the morning, takes a walk along the pond, how he feeds the fish, how he catches them and puts them in an aluminium pot, which he carries to the local market. After a long day at the market, he is once more off to the pond side to guard against fish thieves. He builds contraptions to ward off fish-eating birds. Rupsa documents all that.

All these stories about recipes and fish breeding are being documented by Disappearing Dialogues Collective, an NGO working in the East Kolkata Wetlands. “The ecosystem is sustained by the collective practices of the peri-urban wetland community who see wastewater as a nutrient, creating an ecosystem of co-dependency and grounded practice that highlight valuable interlinkages between nature, culture and economy,” says Nobina Gupta of the collective.

Over the past six years, the collective has also engaged with the children of the two public schools in the East Kolkata Wetlands. The NGO works with and within communities, using art and culture as a medium to bridge gaps, start conversations and build new narratives. The idea is to add value and also assist in the preservation of existing heritage, culture and environment.

Residents of the wetlands, Sundari Mandal and Kalyani Mandal, talk about wetlands-grown remedies for children. Sundari mentions nagdana leaves as a cure for high fever. Kalyani shares how centella leaves can be used for an upset stomach, as also marigold. The NGO is planning to document this knowledge base, says Gupta.

Nibedita and Nayana are preparing themselves for the future. While Nayana is pursuing a master’s, Nibedita is still in school. “What should I study so I can get a job?” asks Nayana. Both are training to be eco guides for wetlands tours. But for that to be a solid job proposition, the wetlands have to continue to exist for long years.