Strolling under the stars 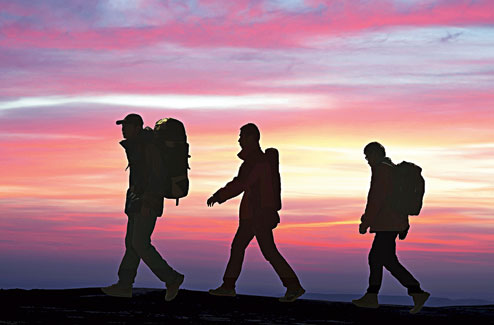 Banker Mohit Chauhan was determined to do it differently. He had decided to go trekking to Rajmachi Fort in Maharashtra’s Sahyadri mountains, but wanted an entirely new experience. So, he didn’t kick-start his expedition to the fort at the crack of dawn but set off on his journey at 7.30pm. He left his home in Mumbai and drove to the outskirts of Lonavala. There he met a group of 10 like-minded trekkers and they headed to Rajmachi village where they set up camp. From the camp the group trekked 4km to the Rajmachi Fort at 11pm. They gazed at the fort in the moonlight before trekking back to the campsite. “I enjoy activities that haul me out of my comfort zone,” says 34-year-old Chauhan.

Welcome to the world of night trekking, a new adventure sport that’s got the attention of adrenalin junkies. So, if you’re besotted with the outdoors and want to push your adventurous streak to the hilt, night trekking is one way of doing it. This novel adventure activity which is practised after nightfall is gaining ground in India. Cashing in are a bevy of adventure companies that are offering night trekking expeditions across different terrain. While some outfits start their treks at midnight and finish after sunrise, there are others who set off at 9.30pm.

Spotting wildlife in the dark, enjoying campfires and marvelling at breathtaking sunrises are all par for the course for New Age thrill-seekers. “During our trek to Rajmachi Fort, we were armed with just our solar lamps. It is unbelievable how the night sounds get amplified in a lonely terrain,” says Chauhan.

Several night trekking hotspots across the country are finding favour with enthusiasts. For instance, destinations in Karnataka such as Ramanagara and Skandagiri are favourites. Other places like Lonavala and Matheran in Maharashtra are also popular with trekkers from Mumbai.

Many reasons have contributed to generating an interest in this activity. Our hot climate (for the better part of the year) makes day trekking tough and night trekking the perfect alternative. Swamy, who founded his adventure travel outfit, escape2explore, in Bangalore in 2013, says: “I began by conducting just four night treks a month, and today I do over 20 a month.”

Night trekking offers a psychological advantage too. “Guides accompanying a night trekking group usually egg people on and motivate them by saying that the destination is near,” says Swamy.

Night trekking is also becoming a go-to adventure activity because it’s slower-paced and usually for shorter distances, so high fitness levels are not so essential. “It’s meant for amateur trekkers and normal fitness levels are enough to see you through,” says Clement Dominic, who takes care of the operations at Bangalore Mountaineering Club (BMC).

Some night treks are not long and while some last two hours, others could be just 5km to 7km of walking over six to seven hours. “The terrain isn’t too challenging either,” says Dominic, adding that around 80 per cent of their groups comprise adults while the rest are children over 12.

Most adventure travel companies are also throwing in a mix of activities along with the night treks to keep interest levels high. For instance, BMC arranges cave exploration as part of their night treks to Antara Gange that’s about 60km from Bangalore. “An aspect of the cave exploration that’s particularly thrilling is that trekkers can’t come out of the caves without the help of the guide who accompanies them,” says Dominic.

Bhopal-based Junoon Adventure is also throwing in star-gazing, bird watching and rappelling during its trekking sessions. It started operations in Bhopal in 1999, and now organises night treks in Indore, Delhi and even Nepal (the Annapurna Conservation Area) and Thailand (Phi Phi Islands). “While Nepal offers high altitude terrain, Thailand is perfect for full moon beach walks,” says Yog Chinmoy Dutt, founding director of Junoon Adventure. The cost of the trek organised by Junoon Adventure is anything between Rs 500 and Rs 1,500 per person for night treks in domestic
locations.

Typically, Junoon Adventure’s night trek to Kathotia, that’s about 7km outside Bhopal, begins someplace between Kathotia and Bhopal where the trekkers meet. They park their vehicles at the meeting point and then set off on their trek.

A clear advantage of night trekking is its minimal gear requirement. Abhijeet Mhatre, founder of Mumbai-based camping company Letscampout, says that all you need is a long-lasting torch, shoes that have been worn at least seven to eight times, a bottle of water as well as salt and sugar.

So, don’t let your adventurous side slide into a rut this season. Opt for a one-of-a-kind night trek to experience a new kind of adrenalin rush.