Sting in the air

The vaccine and a little matter of indirect inoculation 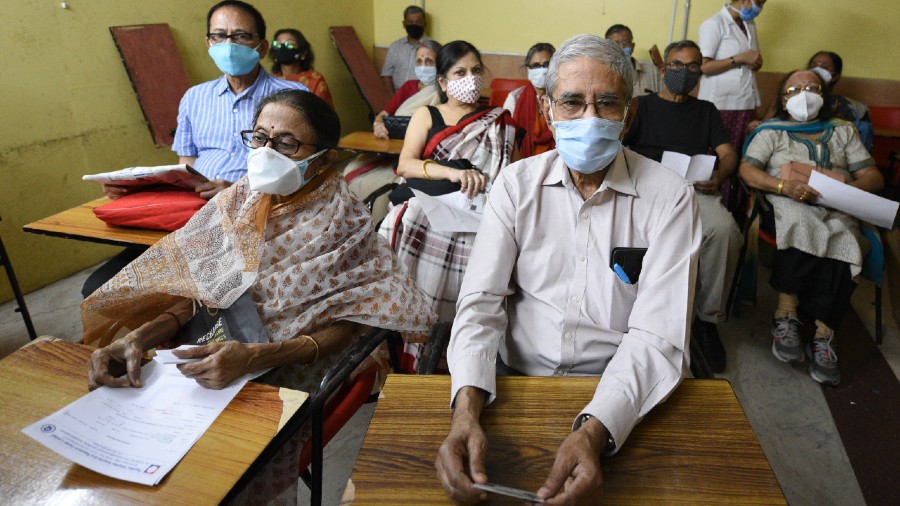 All of it started a fortnight ago. The parents received two calls, almost simultaneously — two relations, from different sides of the family, informing them that they’d got it. It — as in the vaccine. Both parties were near euphoric, everything was smooth, everything was good, no side effects yet, the virus was cowering in a corner, all whacked and vaccinated, and all was grand with the world.

I lapped up all reported facts with great

attention and did the obvious — asked if they would like to register — and was given quite a mouthful.

How could one be so immature? To think one would rush to be first in line for anything. Had I learnt nothing? So many fine things to be considered. International cases were cited — this vaccine recalled, that vaccine on pause. Also, waiting in a queue on a bad health day was difficult, etc.

They were all valid points, and suitably chastised and feeling a tad foolish for being thus swayed, I decided to shelve the vaccine talk for now.

The third call came from a friend, a day later. I thought I noticed a certain melting of stance. “She’s so positive,” I heard one parent say to no one in particular more than once, and the next thing I knew she had finished knitting the half jacket from yarns constipated for nearly a year now. If you wish you can find out details about the procedure from mashi, I was told.  “Would you like to regis…” I started to ask, perhaps a little too eagerly, only to be cut off with a knit and purl of the brow. As I slunk away, I heard her say softly, her back to the window — “She’s too positive” — and I realised we were back to square one.

The next couple of days, whenever their phone rang or the WhatsApp pinged, one out of three times it was someone in their social orbit announcing they had been vaccinated. The other two times, the conversations touched upon the vaccine. “Have you?” or “Will you?” I guessed from the duration of the conversation what the response at the other end might have been.

Among the vaccinators, some gushed, some merely shared the news, some persuaded — better-get-yours, some were ominous, some hustled. The others, the Had-Nots, continued to mull through their distinctive family, health and logistics issues.

In the meantime, the neighbours started to call. “We’ve got it.” More reports of Got-Its came in via the local grocer, the vegetable seller, the fishmonger. Suddenly the world seemed to be peopled by two sets — the Got-Its and the Had-Nots. Separating them was a needle and a leap of faith.

The parents’ turn came quite by chance. Just 24 hours between registration and driving up to the ward office. There was some distress at the thought that I would have to wait my turn. “She has a tendency of high pressure,” pointing to me, the persuasive parent tried to tell the corporation official, but she only smiled. That apart, it was practically festive — routines rejigged, menu rejigged, pre-pandemic clothes out, lotion slathered on. The plumber, the post office agent, the physiotherapist, anyone who called was told we’d get back. “Aajke vaccine,” that’s all that needed to be said. Like Moses’s Red Sea, the world parted at the words and let us proceed with our business.

As the parents waited out the mandatory half-hour post the vaccination, I waited at the gate. With half a mind preoccupied with what-ifs, I watched as more seniors queued up and the very seniors were led away with care into an adjoining waiting area. Those who were going in seemed nervous, clutch-ing at Aadhaar cards with wrinkled hands, some calling up alarmed wards upon hearing one needs a photocopy of the document, husbands held out a protective arm for wives, wives scolded husbands for taking off the mask, for putting on the mask, for nothing in particular... Many of them had walking sticks in hand.

And then I woke up to the fact that those who were coming out, the set that went in a little while ago, now looked different.

I don’t know if it was my imagination but they seemed to be of somewhat altered carriage and bearing. They stood more straight than before. The faces beamed — though some of you will suggest it was the sweat — and the walking sticks looked like valiant sabres to my eye. It was so infectious, the sight, the hope in the air, the spring in the step. That and a sense of passing into medical history, crossing of milestone, I too felt fortified, vaccinated by association. My phone started to ring. The screen flashed — Ma. I swiped and heard her say, “We will take another 10 minutes, but you find yourself some nice shady place to wait.” Then with a chuckle, “Remember, you are the weak one.”

Now, when did I plead otherwise?