Advertisement
Home / Culture / The Play That Will Be

The Play That Will Be 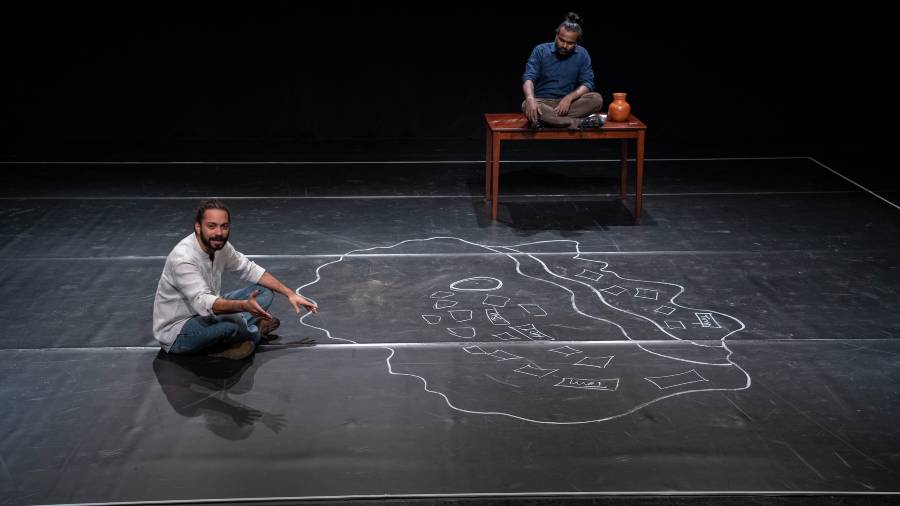 The Spielart website listed My Name Is Tamizh as a new creation by Sankar Venkateswaran for 2023. Spielart is an international theatre festival that takes place every two years in Munich, Germany. The mind reads as it pleases; I overlooked the future date and leapt right in. A “theatre piece” about the experiences of Tamil people in Jaffna, Sri Lanka, it was apparently centred around the burning of the Jaffna Public Library.

In the summer of 1981, the political climate in Sri Lanka was scorching, but that library, rich with 1,00,000 Tamil books, rare manuscripts and documents, did not self-combust. When the Tamil United Liberation Front (TULF) held a rally, three Sinhalese policemen were shot, two of them died. The incident elicited a backlash from the Sinhalese police and paramilitary forces. The TULF headquarters burned as did Tamil newspaper offices, and the library was not spared either. Politicians barely condemned it; newspapers barely reported it. Tamil poet M.A. Nuhman wrote: Last night/I dreamt/Buddha was shot dead…

Venkateswaran’s “theatre piece”, the Spielart note claimed, was “an attempt to expose the nexus between language, power and terror”. When I got through to Venkateswaran — he lives in Attapadi, a tribal block in Kerala’s Palakkad district and that is where he runs his Theatre Roots & Wings — I learnt that My Name Is Tamizh was still in the works. The pandemic had played spoilsport, impeding all that travel a collaborative effort necessitates. Venkateswaran’s collaborator in this project is Nicholas Kirutharshan of Sri Lanka.

Minus the play, the chat with Venkateswaran feels a bit like the ending of Wells’ The Invisible Man. Griffin emerges into view gradually, from inside to outside, first nerves then hazy sketch of a limb, then glassy bones, arteries, then flesh and then skin. I get to know a play in reverse, from hearing its creator-to-be talk about the idea of it, the stirrings.

One of the starting points for this piece, according to Venkateswaran, was a Tamil broadcast he heard while he was in Switzerland. He says, “This gave me a completely different picture. Very different from what I knew and had pieced together from whatever appeared in mainstream media.” He continues, “Thirty-five years of unrest and uncertainties just across the strait and almost a completely uninformed kind of situation this side of the strait. It shocked me.”

The play that showed at Spielart 2021 in place of My Name Is Tamizh is called Criminal Tribes Act: Extended. Venkateswaran’s subject is solid but its form is elastic. And he works through suggestions. There is an area demarcated for performance. By way of props there is a table and a chair — apart, not together. There are two actors playing actors — Chandru is a Dalit and Rudy is a Nair. And they are performing their respective castes, some part wittingly and some as if unwittingly.

There is that bit when Chandru draws a squiggle on the floor that represents his village and still more squiggles and straight lines and a circle inside it. They represent his village, upper class habitation, lower class habitation, road separating the two and the village well, in that order. After Chandru has spoken at length about the dos and don’ts within the big squiggle — this includes how lower caste people are not allowed to draw water from the well, they cannot touch the well or the water directly and have to depend on the upper castes to draw the water out and pour it into their buckets — he asks Rudy if he has ever faced anything like this.

Rudy: Growing up, I guess I always knew what caste was, but never experienced anything like this.

Rudy (shrugging): I went to a school where none of it really mattered… I didn’t know what my caste really was until much later in life.

Chandru (persistent): What is your caste?

Rudy (pausing as the point seems to dawn on him): I belong to the Nair community.

Chandru: Oh. Inside the well.

Much of the content of the play sounds textbookish, like a taught lesson, almost as if to say so is caste formation, caste awareness, even caste aloofness.

How does an audience at Munich Volkstheater respond to a

subject so tethered to another geography? Says Venkateswaran, “Discrimination exists at so many levels. Here, we just begin from a particularity.”

Criminal Tribes has Chandru and Rudy speaking in Kannada and English, respectively. There are translations inherent in the performance and subtitles (in this case, German) winking from a digital board and in between there are whole swathes of silence. My Name Is Tamizh does not exist yet, but Venkateswaran promises that it too will be a multilingual piece.

When I ask him about this multilingualism, perhaps at the cost of the narrative, he replies, “Our theatre experience is limited by things like language. For instance, if I don’t understand Marathi, I might give a Marathi play a miss. And for this reason, initially, I used to work with silence as my chosen language of theatre. Now I realise it is not about one or no language, but about many languages. Not for the display of it, but for meaning making. Not as a tool, but as a metaphor.”

Or the reality we are too scared to embrace.